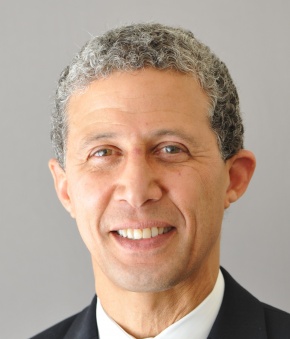 Timothy Breck Boyd is an American who was the President of the Theosophical Society in America from 2011 to 2017. On April 28, 2014, it was announced that he was elected President of the international Theosophical Society based in Adyar, Chennai, India. He served in both presidencies concurrently until the end of his TSA term in 2017. He still continues his international role. 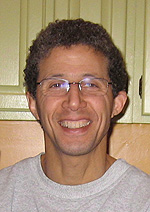 Mr. Boyd was born on October 22, 1953 in New York City. He attended Brown University in Providence, Rhode Island, and completed a Bachelor of Arts degree at the University of Chicago. Afterward, he joined a spiritual community in Chicago headed by Theosophist Bill Lawrence, of whom he often speaks and writes as "the Old Man." The community was active for over 25 years. He and his coworkers taught meditation and healing methods to troubled urban youth. They established organic food gardens on vacant lots, and renovated housing in the inner city.[1]. Eventually he became a Partner in Royal Associates, a real estate development firm.[2]

On October 5, 1974, Mr. Boyd joined the Theosophical Society.[3] He has participated in lodge work in Chicago, and was active in the Illinois-Wisconsin Federation. He was a member of the board of the Theosophical Society in America and served as Vice President. He has also been on the board of the Theosophical Book Gift Institute that ships books to libraries and prisons. For some years he has been much in demand as a lecturer and workshop leader in the United States, Central and South America, Europe, Asia, and New Zealand, and he has written articles published in theosophical journals around the world. 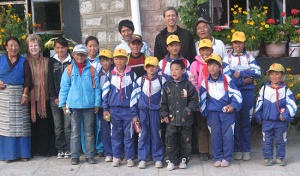 Tim Boyd with children from Chushul Orphanage in Tibet.

Mr. Boyd has been active in the Theosophical Order of Service (TOS) for many years, serving on the board of directors and as president of the American branch from February 2007 to February 2011. This organization is involved in numerous projects such as serving meals at homeless shelters; Native American schools; environmental issues; animal rights; and raising funds for relief of disasters worldwide.

As president, Tim provided a fresh direction for the organization through a restructuring. "Departments" were eliminated and service project/programs were highlighted instead. Soon after taking office, Tim introduced the board members to the Center for Purposeful Living which led to the TOS/US hosting a weekend workshop called the Totally Responsible Person or TRP. TOS workers from around the nation were invited and the workshop helped give a new energy to many of them in their service work. The second international TOS conference [in 2013] was also hosted under Tim's presidency. This brought together a number of TOS workers from around the world and helped stimulate a sense of unity within the organization. Following this conference, Tim proposed and headed the Kern matching grant program which benefited the Golden Link School in the Philippines.[4]

During his 2008 trip to Tibet, he began working with the Chushul Orphanage, in partnership with the Tibet Fund of New York and the Tibet Development Fund. The TOS raised funds to build a much-needed bathroom with several showers, toilets and sinks, and a septic tank.[5] Unfortunately, the Chinese closed the Chushul home in 2013, but the children were allowed to stay together.[6] Mr. Boyd's involvement with the TOS and the Chushul orphanage in Tibet led to an audience with the Dalai Lama in Iowa, 2010, accompanied by his wife Lily, and Betty and David Bland. 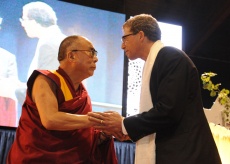 In 2011 Mr. Boyd was nominated for the Presidency of the Theosophical Society in America, running unopposed. Even before his installation in the office in July, 2011, he was heavily engaged in the planning for a visit of the Dalai Lama to Chicago. His Holiness gave a public lecture on Sunday, July 17 at the UIC Pavilion on "Bridging Religious Divides"; a public panel discussion with interfaith leaders at the Harris Theater on the morning of July 18, and a private members' talk later that day. The events were attended by ten thousand people, and raised over $400,000 for educational projects aiding Tibetan communities worldwide.

In January, 2012, the TSA came to an agreement with the Prairie School of DuPage to rent space to the newly formed cooperative school. Rooms in the garage wing and in the basement of the headquarters building were made available, and a playground space was developed to the northwest.[7]

The E-newsletter that was inaugurated under Betty Bland's administration has grown in importance as a communication channel. Mr. Boyd has been recording a video blog that is a major feature of each newsletter now. The newsletter is available at this website.

The year 2014 was uniquely busy, as elections were held for both the national and international societies, with Tim on each ballot. The Inter-American Theosophical Federation held its convention, themed "Theosophy as Action," from May 28 to June 1 at the Olcott campus. The sessions were productive and harmonious, with each presentation webcast and recorded in English and Spanish. When the semi-annual board meetings commenced on July 14, Tim welcomed Barbara Hebert as Vice President, replacing Ed Abdill. Floyd Kettering had replaced Nancy Secrest as Treasurer the previous year, and David Bruce continued as National Secretary. The board members were Kathleen Neuman, Jo Schneider, Nancy Secrest, Kathryn Gann, Judith Snow-Clewell, and Doug Keene. The 128th annual convention followed on July 18-22, with the theme "Science and the Experience of Consciousness." Featured speakers were Dr. Amit Goswami, Dr. Uma Krishnamurthy, Vic Hao Chin, Jr., Dr. Dean Radin, Dr. Eben Alexander, and Dr. Russell Targ. Immediately afterward, the TSA hosted a highly successful international conference, "Education for a New Humanity." Educators from several different pedagogical traditions discussed ways in which spirituality can be incorporated into schooling. One presented nature education, and the other educational systems were all tied to Theosophy: the Point Loma Raja Yoga school; Vic Hao Chin, Jr.'s Golden Link College; Maria Montessori's method; and Rudolf Steiner's Waldorf education.

After international President Radha Burnier passed away on October 31, 2013, a special election was scheduled to fill the vacancy. During the annual convention at Adyar in December, Mr. Boyd was urged to accept nomination, which he had not been seeking. After long discussions, he was persuaded to become a candidate, with the understanding that he would continue in his office as President of the American Section as well, for at least three years. He and Indian member C. V. K. Maithreya received enough nominations to be on the ballot. The candidates and the electoral process were not embroiled in the controversy found in some previous elections, and both candidates were widely viewed as competent and forward-looking. The announcement of the results was made April 27, 2014. 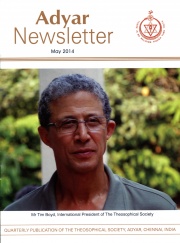 According to the Adyar Newsletter,

Mr. Tim Boyd assumed office as the eighth international President of the Theosophical Society at the international Headquarters in Adyar at 6:00 p.m. on 27 April 2014, about an hour after the results of the TS Presidential election was communicated to all by the international Secretary, Dr. Chittaranjan Satapathy.

The inaugural ceremony for the President's first term of office took place the next day in the afternoon of 28 April at the Headquarters Hall. This was preceded by an informal tea party at 4:30 p.m. in the open-air Adyar Theatre, where refreshments were served and the President met many workers and residents in the TS campus, who were happy to meet him. Everyone was charmed by his simplicity, candid manner, and ready smile. This was followed by the formal inauguration meeting, wherein the President thanked all the TS members regardless ofhow they had voted, and said that he was both honoured and humbled to accept the position held earlier by those such as Annie Besant, N. Sri Ram, and Radha Burnier. He assured them that he would do his best to further the cause of Theosophy and the Theosophical Society. Prior to the talk, the President's Signet Ring had been placed on Mr. Boyd's finger by Mr. H. Harihara Raghavan, General Manager of the Estate.[8]

Mr. Boyd's initial months were a whirlwind of action. He stayed at Adyar until mid-May, when he returned to the United States, traveling directly to Miami Beach for the annual convention of the Florida Federation, May 16-18, followed by the Inter-American Theosophical Federation at the Olcott campus from May 28 to June 1. Tim and Lily Boyd traveled to Italy June 4-14 for the convention of the Italian Section.

Semi-annual board meetings of the Theosophical Society in America commenced on July 14, and the 128th annual convention followed July 18-22. Immediately afterward, the TSA hosted a highly successful international conference, "Education for a New Humanity." The Boyds left on July 28 for the European Federation convention in Paris, following by the International Theosophical Conference at the International Theosophical Centre in Naarden, The Netherlands. Tim went on to India, returning to the Olcott campus just before the American Section's annual festival, TheosoFest, on September 6.

Tim Boyd is married to Lily, who is from Singapore and speaks several languages, including Tamil. Angelique, their daughter, is attending college. From 1996 to 2000 he worked in hospice services as a volunteer in a team that involved doctors, social workers, and nurses. Tim plays the flute, and is an excellent cook and gardener.

Like other TSA Presidents, Mr. Boyd serves as Editor in Chief for Quest magazine, the national journal, and for Messenger, the member newsletter. The Union Index of Theosophical Periodicals lists many articles by and about Tim Boyd. Some of them are available online:

Many of Mr. Boyd's lectures have been recorded and are available as audio or video files.