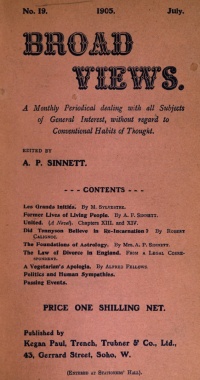 Broad Views was published monthly from January 1904 to June 1907 in London. A. P. Sinnett was the editor and one of the major contributors. Some articles touched on Theosophical topics, but most related to current events, sociology, philosophy, and world cultures. Its slogan was "A Monthly Periodical Dealing with All Subjects of General Interest, Without Regard to Conventional Habits of Thought". Theosophists who were among the contributors include Patience Sinnett, Mabel Collins, Franz Hartmann, and Joseph Bibby. Sinnett’s 1886 book United: A Novel was reprinted serially during 1904 and 1905. The magazine was published at Kegan Paul, Trench, Trübner and Co., who also worked with Sinnett on some of his books.

The magazine suffered some financial difficulties, but its demise was probably triggered by the death in 1907 of Theosophical Society President-Founder Henry Steel Olcott. A. P. Sinnett, then Vice President, took over management of the organization until Annie Besant was elected President.

Sinnett wrote of the magazine:

During 1903 I made arrangements for the production of a monthly magazine to be called "Broad Views". The capital, - not adequate to the cost of bold advertising, - was kindly subscribed by friends and I put a great deal of earnest work into the undertaking but it never paid its way. Outgoings were always in excess of receipts and though I kept it going for about three years it perished at the end of that time and the money put into it was lost.[1]

Some articles and issues are available on the Internet, with Hathitrust adding more versions all the time: