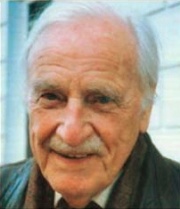 Geoffrey Farthing was born at Heaton Mersey near Manchester in Lancashire, England on December 10, 1909. He was educated at boarding schools at Eastbourne and Buckinghamshire, where he was quite happy. Raised as a devout Anglican, he became dissatisfied with the Church as a teenager and read many books in a quest for understanding. He happened to read the "Initiate" volumes by Cyril Scott, which referred him to publications of the Theosophical Society. He began his higher education at London University, but became apprenticed at a large electrical engineering works near Manchester. He attended night school at Manchester College of Technology, and studied Theosophy in his spare moments. He made the acquaintance of an Indian gentleman who gave him another view of religion, spurring further study.

In his career as a Chartered Electrical Engineer, Mr. Farthing was employed by the Central Electricity Board and the Yorkshire Electricity Board. He said he worked "nearly all my life with the nationalized industry in Yorkshire. I was in charge of about 100 shops, service centres as they were called, of contracting (wiring factories, shops and homes), advertising shows and distribution, appliance testing, repair and reconditioning, etc." His parents weres not sympathetic to his interest in Theosophy.

While Mr. Farthing knew the name Theosophical Society from publications, he had no contact with members until the late 1920s.

At the end of the 1920’s when work was very scarce I very fortunately got a job in London. There was then a severe depression. A whole series of `coincidences’ eventually took me to the Theosophical Society in London with its wonderful library. From that I borrowed many books for a few years and began a longish process of self-education in Theosophy. It got more and more thrilling the more I knew about it.

One day my enthusiasm for my new-found subject got the better of me and I invited an old school friend to come to the Theosophical Society to hear a lecture given by a well-known theosophical lady on ”The Masters”. This was in Besant Hall at the back of 50 Gloucester Place. It was the occasion of an Easter Convention which the Society at that time held regularly. The speaker was oddly dressed in a green gown with yellow lightning flashes across it and large triangular-shaped sleeves which she theatrically showed off at every opportunity. It was ludicrous and my friend and I got the giggles. We tried to suppress our laughter but we really could not. Eventually an usher came up to us and said that even if we did not want to listen to the lecture, others did, and would we mind going out. That was my first acquaintance with the Theosophical Society. Thereafter I thought nothing would induce me to join![1]

Mr. Farthing served six years in the Army in the Royal Corps of Signal (Royal Signals), attaining the rank of Major. When war broke out in 1939, he was called up immediately, since he had previously joined the Territorial Army (Volunteers).

He was to serve five years in various capacities in military Communications. He had always had an interest in radio. As a result of this he spent much of his early time in the Forces teaching and training other people in telecommunications, and although he became Commanding officer of a special technical unit towards the end of the war, he never saw active service abroad.


The point of this diversion is that during the five years of army service his interest in matters 'theosophical' was totally suspended. It was as if the light had been switched off. He had no interest whatever in all the things that had up till then been so enthralling. However, with the end of hostilities in Europe his interest suddenly flared up and by an odd quirk of fortune he found himself in very comfortable circumstances with no serious duties, billeted comfortably in a nice house with a servant looking after his needs, so that he could and did spend many hours every day reading The Secret Doctrine. This lasted for one year.[2]

A book by Paul Brunton and an acquaintance with John B. S. Coats renewed his interest in the Society, and after the war he joined the local TS lodge in Leeds.

The Leeds Lodge quickly discovered that Mr. Farthing was very knowledgeable about the Ancient Wisdom, and particularly the esoteric teachings of H. P. Blavatsky. He was recruited to lecture, beginning a speaking career than spanned many countries and sixty years.

Mr. Farthing was a founder and director of the European School of Theosophy, and frequently lectured at its annual study week that convenes all over Europe. In 1974 he was invited to deliver the prestigious Blavatsky Lecture at the Annual Convention of the English Theosophical Society on "Life, Death and Dreams".[3]

The nonprofit organization that he founded, The Blavatsky Trust, continues to disseminate the writings of H. P. Blavatsky.

Mr. Farthing has said this of his service as General Secretary in the English Section:

I was President of the T.S. in England from 1969 to 1972. During this time I let it be known quite openly that I was a Master/H.P.B. man; this was not acceptable to the generality of members. There was a strong Church and Masonic faction in the Society, the members of which eventually got together and voted me out of office. This was a considerable blow to me as I had given up my job - quite a lucrative one and of some influence - to come and work for the Society. Being voted out was a hurtful experience but in a way it was a blessing. I was free of all other duties and could get on with my study and my writing.[4]

During the 1980s and 1990s, Geoffrey was a regular course leader at annual residential weekends exploring The Secret Doctrine, held at Tekels Park, Camberley, Surrey. He took an active part in the Theosophy/Science weekends held each year within the English Section. On April 6, 2001, he retired from the Executive Committee after 40 years' work, and was awarded a silver goblet in recognition.[5]

Geoffrey Farthing passed away in 2004. He never married.

Mr. Farthing wrote extensively about Theosophy. In 1996, he was received the Subba Row Medal, awarded in 1995, for his significant contribution to theosophical literature. Many books, articles, and lectures by Mr. Farthing are available online at the Blavatsky Trust Website, The Theosophy Library and other sources.

Dozens of articles are listed in the Union Index of Theosophical Periodicals under Geoffrey Farthing. Some of the more significant include: