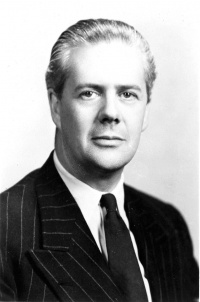 John B. S. Coats (1906-1979) was an English Theosophist who served as the sixth president of the Theosophical Society based in Adyar, Chennai, India.

John Balfour Symington Coats was born on July 8, 1906 in Ayr, South Ayrshire, Scotland. His father, Ernest Coats, a director of the old Paisley firm of thread manufacturers known internationally as J & P Coats. In 1917, Ernest Coats purchased the ancient Sundrum Castle five miles from Ayr.[1] John was educated at Eton College in England from 1918 to 1924, and studied the French language in France.

He was engaged in the family business for about five years, three of which he spent in Vienna, where he learned German. The business manufactured silk and cotton thread and sewing supplies. It was in Vienna that the young man learned of Theosophy through a chance meeting with a stranger. Within the year, he had joined the Society.[2]


When he returned to London to work at the Stock Exchange, he met his future wife, Elizabeth Ann Horlick,[3] who was always known as Betsan. On October 31, 1933, they were married. They lived at Anton-Dolwells, Milverton, Sometset, England.[4] The couple had five children, one of whom died very young. The surviving children, a girl and three boys, were born in 1937, 1939, 1943, and 1953.[5]

Mr. Coats served as President in the Youth Centre in London. Both John and Betsan were active in international activities of the World Federation of Young Theosophists. In 1962, he became head of that organization after Rukmini Devi Arundale resigned from the position, and he continued that work until 1974.

In 1935, the President of the Society, George S. Arundale, asked Mr. Coats to join the headquarters staff at Adyar. The Coats family lived there for four years. Mr. Coats participated in the World Theosophical Congress in Geneva in 1936.[6]During the 1930s, Mr. Coats frequently joined Dr. Arundale and his wife Rukmini Devi in their travels around the world. Mr. Coats was a congenial man who made friends wherever he went, particularly among the young. His ability to lecture in French, Spanish, and German helped him to be a goodwill ambassador for Theosophy. As World War II approached, he joined the Oxford Group called Moral Re-Armament, that worked to oppose the rise of Nazism.


During World War II, Mr. Coats served as General Secretary of the English Section. He had joined the British Army, but after a short time was injured in a motorcycle accident and invalided out. Following the war, from 1946-1948, he and Betsan lectured extensively for the Society for three years, in the US, Canada, Mexico and Cuba, often following completely separate itineraries. Betsan Coats and her husband founded an organization in 1952 called "Wings of Friendship" to help rehabilitate displaced people who were still living in camps across Germany, Austria, Italy and Greece.


In 1953, Mr. Coats was elected Secretary of the European Federation of Theosophical Societies, an organization of more than twenty national sections. During that period he lectured in numerous lodges. He assumed the chairmanship of the federation in 1959, and held that position until 1968. His travels during this period took him to North and South America, Australia, Africa, Israel, and several times to India. At the request of President N. Sri Ram, he organized the World Congress at Salzburg, Austria, which took place in 1966.[7] In an autobiographical article, Coats wrote,

In 1968, my children having married and gone away, I sold my house in England and set out on my wanderings on behalf of the Society. I visited South America, the West Indies, Mexico, the U.S.A. and Canada, Honolulu and Fiji, New Zealand, Australia, Indonesia, Malaya, Vietnam, the Philippines and Japan, India, Ceylon, and Pakistan, East, South and West Africa, Israel and nearly every country in Europe.[8]

Coats was a bishop in the Liberal Catholic Church. 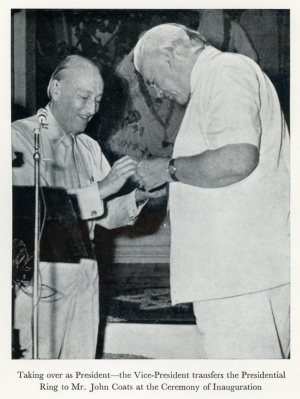 Presidency of the Society

In 1973, International President Nilakanta Sri Ram passed away in April. Vice President James S. Perkins took over temporarily and supervised the electoral process, in which many fine candidates had been nominated: Rukmini Devi Arundale, Joy Mills, Radha Burnier, James S. Perkins, and others.

Mr. Coats traveled extensively in Central and South America that year. He attended the Convention and Summer School of the Argentine Section at the resort town of Embalse de Rio Tercero near Cordoba, along with about 300 people from eight nations, including Theosophical Society in America President Joy Mills. Council meetings of the Inter-American Theosophical Federation held in conjunction with the convention, improved cooperation of members in the Americas in preparation for the 1975 Centenary Congress held in New York City. In June, he began touring the United States, lecturing at numerous branches and for a week at each of the four Theosophical camps. He led sessions at the American convention on the theme, "Preparing for Tomorrow."[9][10]

On November 10th following the 1973 election, he assumed the office of the President of the Theosophical Society, cutting short his American tour to return to Adyar. The ceremonial part of the inauguration took place on Foundation Day a week later, with 500 people gathered in the Headquarters Hall as witnesses.[11]

Joy Mills became Vice President. His presidency was distinguished by efforts to reach out to the general public. This emphasis on reaching a wide audience was evident in issues of The Theosophist that he edited. The International Theosophical Youth Centre at Adyar was established during his administration. He died in office on December 26, 1979, which was the opening day of the annual international Convention at Adyar.

His wife Betsan continued to be very active in the Theosophical Society. In 1982 she arranged a tour of the Dalai Lama in Australia. His Holiness gave her an embroidered tablecloth and napkins.[12]

Here are some of his writings.

Several of Mr. Coats' lectures were recorded and are available from Quest Books John Coats page and from the Henry S. Olcott Memorial Library.