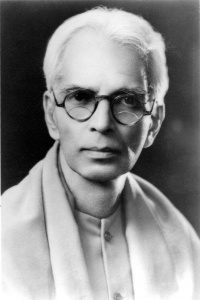 Nilakanta Sri Ram (15 December 1889 - 8 April 1973) was an Indian Theosophist who served as the fifth International President of the Theosophical Society based in Adyar, Chennai, India. He was much loved as a teacher, lecturer, and writer. A phrase that epitomizes his philosophy is,

When you are one with every heart that beats, you are nothing in yourself.[1]

Nilakanta Sri Ram was born on December 15, 1889 in Thanjavur, Tamil Nadu, India. His parents, A. Nilakanta Sastry and his wife Seshammal, were both Theosophists. After attending the Hindu High School in Madras (now Chennai), he completed a Bachelor’s degree from the University of Madras, majoring in Mathematics.

Born into a Brahman family, he made a break with the tradition of appending “Sastri” or “Sarma” to his surname, which would have indicated his high caste. His younger brother, N. S. Sastry, wrote of him as being “born renounced.”[2] He led a life of simplicity, humility, generosity, and detachment, and quietly achieved much without drawing attention to himself. 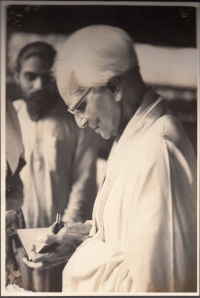 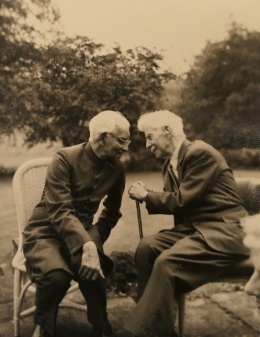 Sri Ram was a teacher at the Besant Theosophical College in Madanapalle, the National School in Bangalore, and the National University of India in Chennai. All of these were schools established by Annie Besant in her initiative to improve Indian education.

He became Assistant Editor of New India, the daily newspaper published by Annie Besant. He helped in her work with the Home Rule League, and helped to draft the Commonwealth of India Bill that was presented before the British Parliament on December 9, 1925. During her final years, 1929-1933, he served as her personal secretary, and was at her bedside when she passed away.

Mr. N. Sri Ram leaves on April 1st for a month's tour in South Africa, and afterwards he is to visit the English Section and other Sections in Europe. He will be the guest speaker at the English Convention from May 30 to June 2 and will take part in Summer Schools in Helsinki (Finland), Stockholm (Sweden), Gammel Prestergaard (Denmark), Rendsburg (W. Germany) and Camberley (England). He will also be in Huizen (Holland) in August for their "International Gathering," and will attend the European Congress in Monte Catini (Italy) before he returns to India in October. [3]

Mr. Jinarājadāsa greatly valued his advice and assistance and wanted Mr. Sri Ram to succeed him in the presidency. Suffering from ill health, Raja retired from the presidency in 1953. Mr. Sri Ram received 36 nominations as a candidate to become president; Sidney A. Cook received 17; Rukmini Devi Arundale received 16; and other candidates included Josephine Ransom, Ernest Wood, and James S. Perkins. Cook withdrew from the race, leaving Rukmini in competition with her brother for the office, but Sri Ram ultimately won the election.[4] Mr. Cook continued in his position as Vice President.

Mr. Sri Ram assumed the Presidency of the Society on February 17, 1953. Like most Theosophical Society presidents, he lectured all over the world. In 1964 he presented the Blavatsky Lecture on Consiousness: Its Nature and Action.

During his term in office, the Adyar Library and Research Centre was shifted out of the headquarters building into a new structure. Another new building was created to house the Vasanta Press, with the cornerstone laid on April 3, 1968. On that same day, International Vice President James S. Perkins and his wife Kathrine presented a new printing press from Germany and binding equipment from Switzerland, gifts of The Kern Foundation.[5] 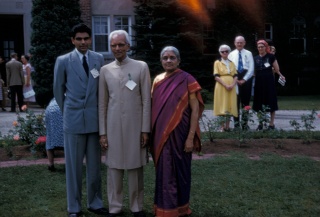 During his years in office he toured the world almost every year, participating in conventions and lecturing at lodges. He was often accompanied by his wife and son. He also lectured regularly at the School of the Wisdom, and some of those talks were assembled into book form, ‘’The Way of Wisdom.”

In 1968 death claimed his dear wife Bhagirathi.[6] He passed away on April 8, 1973, and was succeeded by John B. S. Coats after an interim in which Vice President James S. Perkins served as Acting President.

Mr. Sri Ram was a member of Le Droit Humain.

He also wrote booklets, all published by the Theosophical Publishing House in Adyar:

In 1951, Mr. Sri Ram was awarded the Subba Row Medal for his contributions to Theosophical literature. 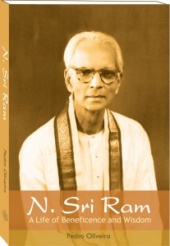