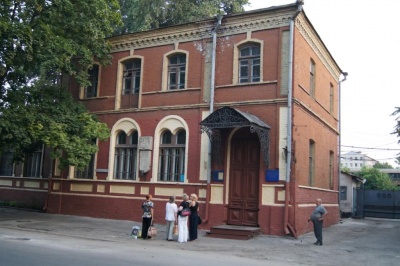 The H. P. Blavatsky House-Museum is a building in Dnepropetrovsk, Ukraine, that was the Fadeyev family mansion in which Helena Petrovna Blavatsky was born. The city was formerly known as Ekaterinoslav. A Ukrainian group has initiated efforts to preserve the building as a museum. They have established a website in Russian and English that links to a video documentary about the project.

During August 3-11, 2013, a group of 62 Ukrainian and Russian Theosophists conducted extensive repairs of the building, working without electricity or hot water. Their volunteer efforts accomplished much in the cleaning, repair, and painting of the exterior, the ground floor, and the cellar. The renovated exhibition hall was used on August 12 to celebrate "Messenger of Light Day", Madame Blavatsky’s 182nd birthday. On August 15, local Theosophists of Dnepropetrovsk used the building to begin a lecture series on “Ethics is the Soul of Ancient Wisdom.”[1]

Here are some photographs of the renovation process: