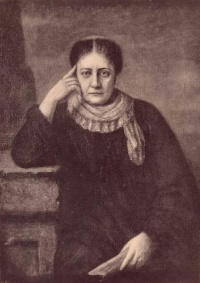 Hermann Schmiechen was a German artist who painted portraits of the Masters Koot Hoomi and Morya, and also of Helena Petrovna Blavatsky. While he lived in England from 1884-1895, he was a member of the Royal Academy of Arts, and painted members of the British aristocracy.

Madame Blavatsky, Patience Sinnett, Laura C. Holloway, Mohini Mohun Chatterji, and others gathered in the artist's London studio in 1884. HPB and others described first Koot Hoomi and then Morya as the Mahatmas appeared to them psychically, and Schmiechen painted to their instructions. Laura Holloway wrote an account of the session that was published in The Word magazine.[1]

Schmiechen, Hermann, a German portrait pointer of note. While the Founders were in England during the summer of 1884, he went to London to paint the portraits of M and KH under the inspiration of HPB. He began these on June 19 and completed them on July 9. After completing, he then painted duplicates of each, probably two. The two original portraits of M and KH were taken to Adyar in October of 1884 and displayed there for some time. They are now in the Shrine Room in the Headquarters Building. He also painted two portraits of HPB, the first in Elberfeld, Germany, in the fall of 1884 and the second in London in 1885. The first one is now in London at 31 Holland Villas Road, and the second is at the Headquarters of the Indian section of the Theosophical Society in Varanasi (Benares), India. ML index; ODL 3: 156; LMW I: 214; HPB VI (chronology); D, p. 338. 'The Theosophist for September 1948, article by LCL.[2]

History of the Mahatma portraits

Dara Eklund, in her collection of the works of William Quan Judge, wrote these notes concerning the portraits:

The well-known portraits of Master K.H. and Master M. are the work of Hermann Schmiechen, a German painter domiciled in London at the time. he began this work on June 19, 1884, and completed it around July 9th. H.P.B. was present at least during one session. Both of these original paintings are signed: H. Schmiechen F.T.S. London 1884, in the lower, right-hand corner. They were taken to Adyar by Col. Olcott when he sailed from Marseilles, France, to Bombay, October 20, 1884 and have stayed there ever since. as far as is known from competent authority, they have never been photographed.

According to the testimony of both Dr. William Hübbe-Schleiden [sic] and of Col. Olcott, Schmiechen made two or three copies of his paintings. One set of these was apparently in the possession of Mr. Judge. Mr. E. A. Neresheimer must have selected the painting of master K.H., as it was later in the home of Katherine Tingley (later still the home of Dr. G. de Purucker) at Point Loma, California. It is not definitely known what became of the portrait of Master M. Which went into the hands of Mrs. Julia Wharton Campbell Ver Planck (later Mrs. Archibald Keightley).

Mention is made of two portraits in the will of Mr. Judge:

THIRD: I give and bequeath to my friend and fellow-student, Mrs. H. Campbell Ver Planck, one of the two oil-paintings made by Schmiechen, of London, being pictures of Hindus, and known as "The Masters," according as she may select; and the other of said two pictures, after the first selection made by said Mrs. J. Campbell Ver Planck, I give and bequeath to my friend and co-worker Emil August Neresheimer, of New York City; an I declare that sid two pictures are the same named in the receipt given by J. H. Salisbury to me for them when they were stored by him, and that they were stored by him for me in a warehouse in New York, as is indicated by the receipt herewith connected.[4]