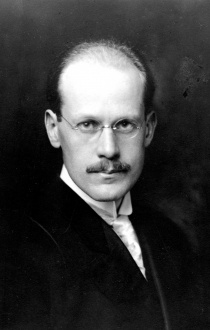 Bishop Irving S. Cooper was an American lecturer for the Theosophical Society in America and a bishop in the Liberal Catholic Church.

Irving Steiger Cooper was born in Santa Barbara, California on March 16, 1882 to parents Augustus Steiger Cooper and Mary Felds Cooper. A brilliant student, he was awarded a degree from the University of California. In 1927 he married Susan L. Warfield, who had been a member of the American Theosophical Society since September 28, 1922.

Soon after he completed his education, Cooper was introduced to Theosophy. He was admitted as a "National" member [member-at-large] of the American Theosophical Society on February 24, 1904, recommended by F. M. Willis and Jessie C. Brodie.[1] "Early in his theosophical service he went to Adyar, and the story is told that having established himself in his own quarters, he presented himself one morning to Mr. C. W. Leadbeater with his typewriter and the announcement: 'Here I am. Set me to work.' And a competent, useful assistant he proved to be to his great friend and teacher, Mr. Leadbeater."

After returning to the United States, he became a National Lecturer who was much in demand. He wrote several books intended to introduce new seekers to the concepts of Theosophy.

It is the urgent duty of the Theosophical Society as a spiritual pioneer of the race, to lead the awakening psychic thought into secure channels. An increasingly large number of people are investigating psychic phenomena, chiefly because they wish to understand their own rudimentary experiences. Urged by ceaseless questionings they seek for answers in all sorts of odd corners, and as a result either come out with most curious conclusions or are led into excesses. many hunger for Theosophic facts, but are repelled by their labels. Should we confine our efforts within the boundaries of the Lodge?

It was with this responsibility in mind that I started a Society for Psychical Research in Berkeley, the home of the University of California. Backed by the strong aid and sustained thought of a class of twelve who had studied Theosophy with me for a year and a half, a hall was rented last August in the Masonic Temple, and the first meeting advertised. Dr. Hyslop, who was lecturing of the Pacific Coast, consented to speak for us. This served as a cue to the newspapers and the Society became well known in a night.

We now have a membership of 80 with an average attendance of 40 at our weekly meetings. Active research is confined to groups which meet at various hours during the week. People may belong to these groups who are not members of the Society. In this way the influence of the Movement is greatly extended. Each group studies some definite phase of psychic phenomena, and their reports form the basis for the deliberations of the general meetings of the Society. All experimenting with phenomena is rigidly excluded from the latter, thus disappointing the merely curious...

Psychic phenomena are valueless unless they lead to a keener recognition of the underlying laws and of the significance of life. I am bending all efforts toward making this attitude rational to the members of the Society.[2]

During a visit to Sydney, Australia, he again met Leadbeater. There Cooper encountered the Liberal Catholic Church and was confirmed in the church.

A year later, on July 13, 1919 he was consecrated to the Episcopate and dedicated to the position of Regionary Bishop of the United States.

In 1920 in California he entered upon his work for the Liberal Catholic Church and during the following two years traveled extensively throughout the United states, visiting parishes, establishing new congregations, and with the help of friends of the Church collected sufficient funds for the erection of the beautiful Pro-Cathedral in Hollywood which was dedicated in May, 1922, and will remain a beautiful monument in his memory.[3]

The Pro-Cathedral is also known as the Church of Saint Alban and the Angels. The parish was established in 1917 with Charles Hampton as the first rector. Bishop Cooper presided at the consecration of the new building on May 7th, 1922, before a crowd of over 400.[4]

Bishop Cooper died on January 17, 1935 of a blood clot following a major operation. A Requiem Eucharist was celebrated in the Pro-cathedral in Hollywood on Sunday, January 20.[5] His wife Susan continued in Theosophical work, and was on the staff intermittently at the Olcott headquarters, heading the Housekeeping Department.[6] For several years she lived in Larkspur, Colorado, a center for Co-Freemasonry. She died on September 7, 1963.

The Union Index of Theosophical Periodicals lists 90 articles by or about Irving Cooper. He also wrote several books: