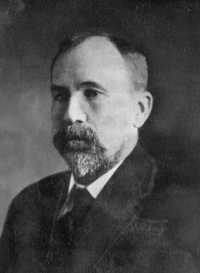 James. H. Hyslop (August 18, 1854 – June 17, 1920) was an American psychologist and psychic researcher. He was probably the J. Hyslop who was one of the Founders of the Theosophical Society.

James Hervey Hyslop was born on August 18, 1854 in Xenia, Ohio as the son of Robert Hyslop and his wife Martha (or Margarette).

Hyslop's first academic position was as an instructor in Philosophy in Lake Forest University in Illinois during 1880–82 and 1884–85. He became the head of Department of Philosophy in Smith College during 1885–86, and then served as a faculty member in Bucknell University in Lewisburgh, Pennsylvania during 1888–89. From 1889–91 he worked as a tutor in philosophy, ethics and psychology. He completed his career at Columbia University, teaching ethics and logic from 1891–1902.

In 1903 he received an honorary degree (LL.D) from the University of Wooster where he had been awarded his Bachelor of Arts degree in 1877.[5]

Dr. Hyslop was an active member of the Society for Psychical Research and of the American Society for Psychical Research, working with Richard Hodgson and with William James. He founded the American Institute for Scientific Research in 1904 to support psychical research and the study of abnormal psychology. The Institute was subsumed by the ASPR, of which Hyslop became the chief investigator of Leonora Piper's skills as a medium.[6] Hyslop was the secretary-treasurer and director of the ASPR from 1907–1920.[7]

With the assistance of other psychical researchers, he recorded many sessions with Mrs. Piper. Some of these experiences were personal in nature:

In 1898-99 a series of sittings [with Boston medium Mrs. Leonora Piper] were held at which Mr. Hyslop, father of Professor J. H. Hyslop, was the professed communicator... Professor Hyslop himself is satisfied that he has actually been in communication with his father.[8]

Professor Hyslop had an international reputation. In 1913 he attended the first Occult Congress held in Berlin. Other attendees were Camille Flammarion; Professor Richet, the French authority on psychological research; Dr. Albert Von Schrenk-Notzing, the German psychiatrist and psychic researcher; and scientists from twenty other countries.[9]

Hyslop is widely recognized as having made a major contribution to the literature of psychical research:

Professor Hyslop, had, with wonderful persistence, patience and precision, placed on record a vast amount of experimental material, fully accredited and exactly sustained in accordance with the standards of evidence. His data, together with his detailed commentaries and observations, are a matter of public record. What he thus accomplished is his greatest monument; and no marble shaft could be more imperishable.[10]

Connections to the Theosophical Society

At the meetings on September 8 and October 16, 1875, a J. Hyslop was present at the meetings when the Theosophical Society was founded in New York. No more precise identification of this person was made by early Theosophists, especially since Hyslop the Founder quickly lost interest in the Society. James Hervey Hyslop would have been 21 years old, attending college in Ohio, but it is not impossible that he is the same individual. Theosophical historians Boris de Zirkoff and Walter A. Carrithers, Jr. believed the two characters to be one and the same.

In 1907, Professor Hyslop was persuaded to speak at the inaugural meeting of the Berkeley Society for Psychical Research. Theosophist Irving S. Cooper had established the Society to support the general public's great interest in psychic phenomena:

Backed by the strong aid and sustained thought of a class of twelve who had studied Theosophy with me for a year and a half, a hall was rented last August in the Masonic Temple, and the first meeting advertised. Dr. Hyslop, who was lecturing of the Pacific Coast, consented to speak for us. This served as a cue to the newspapers and the Society became well known in a night.

We now have a membership of 80 with an average attendance of 40 at our weekly meetings. Active research is confined to groups which meet at various hours during the week. People may belong to these groups who are not members of the Society. In this way the influence of the Movement is greatly extended. Each group studies some definite phase of psychic phenomena, and their reports form the basis for the deliberations of the general meetings of the Society. All experimenting with phenomena is rigidly excluded from the latter, thus disappointing the merely curious...[11]

While James H. Hyslop seems to have had no other known connection to the Theosophical Movement, he and his books were mentioned at times in Theosophical periodicals as having useful ideas. A review of his book Science and a Future Life says:

This book, while unrelated to the teachings of Theosophy, is of some importance as evidence of the trend of the scientific spirit to-day. Prof. Hyslop, as is well known, became convinced of the continuity of Life through psychical research, but in this, his last work, he indicates more interest in the "inferences" to be drawn from accumulated facts than in the data themselves. This is its claim to our consideration: When we find in his concluding chapter the assertion, "The relative value of consciousness" is the important question and that "there are two things that interest us, external reality and our inner life, matter and consciousness," and through the dictum that "matter itself only interests us for its effect on consciousness," we realized that it will not be long before "states of consciousness" will be recognized as more important than matter.[12]

Professor Hyslop was a prolific writer. William James, Richard Hodgson and Oliver Lodge and others criticized some of his books not for their content but for their convoluted style and high degree of detail.

Hyslop published many reviews and articles in academic journals, and in the Proceedings on the Society for Psychical Research. The Union Index of Theosophical Periodicals lists 26 articles by or about him.