W. A. Carrithers at a young age
Walter Adley Carrithers, Jr. (August 14, 1924 - ca. August 21, 1994) was a Theosophical historian in Fresno, California. Using the pen name of Adlai E. Waterman, he wrote the book, Obituary: the “Hodgson Report” on Madame Blavatsky 1885-1960, in which he reveals that the research of Richard Hodgson into the activities of Helena Petrovna Blavatsky was biased and defective.

He formed The Blavatsky Foundation to perpetuate public knowledge of the life and works of Helena Petrovna Blavatsky.

Walter Adley Carrithers, Jr., was born on August 14, 1924 in Fresno, California, to Walter Carrithers and Mabel E. Fletcher. His close family relationships were important in his life.

Walter Adley Carrithers, Sr. (b. May 9, 1887) was ordained as a minister in the evangelical Pilgrim Holiness denomination in 1922. Carrithers met Mabel Elizabeth Fletcher (b. June 30, 1886), and they married on September 1, 1923 in Fresno. He became pastor of the Pilgrim Holiness Church in Fresno and maintained a ministry to prisoners until his death on March 17, 1964. For twenty-three years, he was also chief mechanic at the Fresno Playground Department, until he retired in 1951. The couple had two sons: Walter born in 1924, and his brother Nathan, born on October 1, 1927.

Nathan was drafted into the Army in 1950, but was released from service in 1953 after suffering a brain injury and a damaging course of insulin shock treatments. He gradually recovered and was able to operate an auto repair shop and to share an interest in photography with his brother. After their mother Mabel died in September, 1973, the two brothers inherited the family home.

Walter enjoyed English and art classes in High School, and was art director for the school yearbook for three years. He won awards in art and essay contests, and wrote letters to local newspapers about subjects like communism and dirigibles.[1][2] However, he could not maintain interest in other courses like geometry and Spanish that were required for college entrance. Testing showed his IQ to be 138, but lack of discipline and motivation deterred his academic progress. He enrolled in correspondence schools to become a commercial artist, but did not turn in many of the lessons. He also considered librarianship and law school, but could not manage the academic and financial requirements.

In 1944 Walter Jr. took a job as mayonnaise cook at Coleman Products, and stayed there until 1951. After that point, the family struggled financially, since the father had retired from his government job, and Nathan was in the Army. In 1957 Walter Jr. offered astrological readings, advertising in Astrology Guide, but that never generated much income, if any. From 1964-1980 Walter had a typesetting business called Manuscript Typing Service, later known as Textset Col-Type Service.

Walter’s health was never robust, and around 1980-1981 he applied for disability and public assistance. He died of heart failure in Fresno on or about August 21, 1994. He was found by the police about three days after his death. Tributes were written in The High Country Theosophist by John Cooper and in the Preface to the online edition of Obituary: "The Hodgson Report, published by The Blavatsky Foundation.

Most of Carrithers' life work lay in defending Helena Petrovna Blavatsky (HPB), cofounder of the Theosophical Society in 1875. Madame Blavatsky was accused of fraud, deceit, espionage, and other things by detractors from 1875 until the end of the end of her life in 1891, and for many decades afterward. The English Raj in India accused her of spying for the Russians. Spiritualists believed she was faking the phenomena that she produced. Her colorful narratives and inconsistency in relating her personal history often led to allegations that she was was deceitful. Despite her kind actions, the brusque manner of her speech offended some. Richard Hodgson of the Society for Psychical Research in London went to Theosophical Society headquarters at Adyar, Madras, India in 1884 to conduct an investigation that turned into a media circus.

Carrithers was triggered by the Blavatsky biography Priestess of the Occult published by Gertrude Marvin Williams in 1946. That author was inclined to believe the worst about HPB, using sarcastic chapter titles such as "Danse Macabre," "Hoodoo Years," and "Necromancy, Inc." Her writing was sensationalistic and sarcastic, inventing dialogue freely, and putting the worst possible construction on facts presented. Carrithers set to work to dispute Williams' numerous errors of fact and interpretation.

The Truth about Madame Blavatsky

The first work Carrithers published to defend Madame Blavatsky was The Truth about Madame Blavatsky. It was issued as a pamphlet and also as a Supplement to The Theosophical Forum, April 1947, by the Theosophical Society then at Covina and now at Pasadena, California."[3] It was intended as a direct rebuttal of Williams' negative comments. Carrithers focused on HPB's travels in Tibet; her writings; Tibetan adepts; HPB's morality; the SPR investigation; and the Mahatma Letters.

Carrithers became a dues-paying member of the SPR in 1947, hoping to have more cooperation and influence by working from the inside than he would as an independent researcher.[4] This intuition proved to be correct. Over the course of fourteen years, he persuaded the SPR to search out documents used in Hodgson's 1884 investigation:

Carrithers persuaded C. R. Groves of the Theosophical Society in England to have the documents transcribed and then microfilmed, and paid to have the work done. His persistence paid off as a great leap forward in understanding the flaws in Hodgson's work. 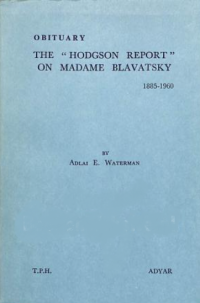 Carrithers worked for years to clarify every detail of what happened in the Hodgson investigation, and to identify the factual errors and inaccurate conclusions of the Hodgson Report. He corresponded with numerous libraries, organizations, and individuals to pin down bits of information. In 1963, Obituary: The "Hodgson Report" on Madame Blavatsky was finally published under the name Adlai E. Waterman.

Dr. John Cooper, a Theosophical history expert who worked extensively on the Blavatsky correspondence, wrote of this work:

Walter Carrithers will be best remembered under the pen name of Adlai E. Waterman as the author of the book, Obituary: The "Hodgson Report" on Madame Blavatsky, which was published by the Theosophical Publishing House in 1963 with a preface by N. Sri Ram.

The then President of the Theosophical Society called the book а “remarkable piece of work... undertaken... with extreme thoroughness and care.”[5]

After publication, Carrithers mailed dozens of copies to interested people, and followed the reviews closely – even making rebuttals to some reviewers' comments. "He was obsessed with this defence and neglected his health by working night after night as one of the Defenders. In some ways he carried this to such an extreme that his friend Boris de Zirkoff wrote to advise that he should “take some rest, some sleep... and place your mind somewhere else than on those schemers and slanderers.”[6]

Funding and support for these projects

Carrithers was not a member of any of the branches of the Theosophical Movement, but solicited assistance from all of the organizations and their publishing houses. His interest in HPB accorded with the missions of all these groups. Extensive correspondence demonstrates his engagement with the Theosophical Society based in Adyar, Chennai, India with its English and American sections and Theosophical Publishing House (Adyar); the United Lodge of Theosophists and its Theosophy Company; the Theosophical Society based in Pasadena, California and its Point Loma Publications and Theosophical University Press; and the H. P. B. Library in Canada. He sought research materials and funding. Individuals sent his information, encouragement, and donations to support the work. Some of his most frequent correspondents were Boris de Zirkoff, William Biersach, Iverson L. Harris, Jr., and Michael Gomes.

After The Blavatsky Foundation was formed, his requests for funding were channeled through foundation newsletters. By 1982 his correspondents had become weary of the continual demands for donations, especially since they saw his major work Obituary was already in print. When he sent out a circular looking for support of his Meade-Campbell project, he received no responses at all.

Logo of Blavatsky Foundation in 1971

Formation and activities of The Blavatsky Foundation

The Blavatsky Foundation was established February 21, 1968 as a nonprofit corporation in Fresno, California by Mabel E. Carrithers, Nathan W. Carrithers, and Walter A. Carrithers, Jr. Carrithers issued regular newsletters mainly dealing with attacks on Madame Blavatsky and requesting financial support for his continuing activities. He used Foundation letterhead for many of his letters to news media and government agencies, and through Foundation mailings distributed Obituary and other literature to public libraries.

The organization continues this work, and maintains a website, blavatskyfoundation.org, that makes available the works of Walter A. Carrithers, Jr., plus articles by Leslie Price and John Cooper.

UFOs and other unexplained phenomena drew his attention in his earlier years. He collected books and subscribed to numerous periodicals. He wrote letters and a few articles for Famous Fantastic Mysteries, Astounding Science Fiction, and Fate Magazine, for instance. These interests also led him to the newsletter Doubt of the Fortean Society, where his name appeared in the very last issue of Doubt in the summer of 1959. He followed the activities of SPR closely, and wrote about the "Soal-Shackelton-Stewart Experiments," "The Borley Excavations," the "Gregson Tenancy," and many other investigations.

Carrithers was a student and practitioner of astrology, and was a member of the American Federation of Astrologers. He and Nathan were keenly interested in photography, and Walter advised Sidney A. Cook on how to set up a microfilming operation at TS headquarters in Adyar.

After the major thrust of his HPB defense culminated in the publication of Obituary, he devoted considerable attention to the assassinations of President John Fitzgerald Kennedy in 1963 and his brother Robert Fitzgerald Kennedy in 1968. When the jailed RFK assassin Sirhan Sirhan asked for books written by HPB, the press went wild. American Theosophists like Joy Mills appeared on television and wrote articles to dispel some of the bad publicity, and Carrithers conducted a major letter-writing campaign in support of HPB, even petitioning the FCC to sanction NBC for its coverage.