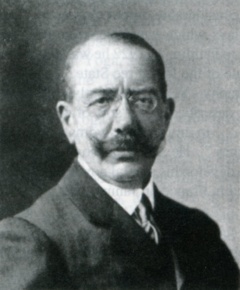 Don José Xifré (1856-1920) was a Spanish nobleman and scholar who devoted his life and wealth to the spread of Theosophy in Spain.[1] He was a personal pupil of Madame Blavatsky, and close friend of Henry Steel Olcott, who wrote of him in his diaries.

Señor Xifré was born in 1856 in the north of Spain to a very wealthy and aristocratic family. Johan van Manen wrote in 1911,

As a child he played with the imperial prince in the Tuileries, when in France; as a youth he was educated with the father of the present King Alphonse of Spain. And it is reported that when his royal friend and fellow-student was lying on his death-bed, he said: "I have had only one disinterested friend, and that was Xifré"...

Señor Xifré is a man of slightly over fifty, very well educated, a good linguist (he writes and speaks French and Italian as well as his own language, and has a sound working knowledge of English and German), he is of a kind-hearted and amiable disposition, extremely - almost femininely - affectionate, loyal to the core, chivalrous as the true Spaniard, with a keen sense of right and wrong, and unflinchingly true to his principles, and above all courteous as a mediaeval knight.[2]

On June 22, 1889 he became a Fellow of the Theosophical Society.[3] He was a personal pupil of Helena Petrovna Blavatsky, and close friend of Colonel Olcott. It was reported:

He was at the center of an example of Blavatsky's clairvoyant ability. He was visiting London to see Blavatsky and came one day to take his leave, but she, with great emphasis, told him that he was not to leave that day. In spite of his protestations regarding firm commitments, she insisted that he defer his departure which he did. The next day the newspaper contained an account of a fearful accident involving the mail train by which he would have been traveling.[4]

In his youth he already squandered the midnight oil in reading the German philosophers, and gradually his spirit emancipated so much, even in the midst of ultra-Catholic surroundings, that he joined the Theosophical Society. Through what channel precisely he came in contact with it we do not know, but it is certain that the real motive was an inner call, for, from the moment he entered our ranks, he took a prominent place and showed himself a devoted and strong supporter of the cause. it is little realised in Protestant lands what Theosophical propaganda means in rigidly Catholic countries. it means opposition, slander, ruin to the weak and the dependent, social ostracism to the strong and independent....

Soon after his admission to the Society, Señor Xifré made the personal acquaintance of H. P. B., whom he venerates as no other, and of whom he soon became a favorite...

At present [1911] Señor Xifré is Presidential Agent for Spain. He resides during a great part of the year in Paris as the Madrid climate is adverse to his health and his doctor has, consequently, advised him not to stay for any length of time in the Spanish capital. But from his Parisian home he watches carefully over Theosophical affairs in his native land, with the fervent hope that the may soon see the victory of his protracted endeavors in the formation of a Spanish Section."[5]

During the years 1889-1920, he was the Presidential Agent for the Society in Spain. For several years he was also Presidential Agent for South America. His Spanish translation of Blavatsky's master work The Secret Doctrine was published in 1895-98, but almost every copy was destroyed by the Roman Catholic Church.[6] Don José was President of the Madrid Lodge until his death in October 1920, and financed the publication of Sophia for 21 years. It is still being published, and the Theosophical Society in Spain was finally formed in 1921.

In 1905, he financed the Vasantapuram gateway at the Adyar headquarters of the Society.[7]

The Union Index of Theosophical Periodicals lists several articles by or about Señor Xifré.