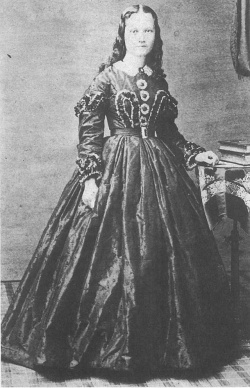 Mrs. Mary E. Foster was a Hawaiian Theosophist who was close to the Buddhist leader Anagarika Dharmapala and was a great benefactor of the Maha Bodhi Society of India.

Mary Elizabeth Makahala Robinson was born in Honolulu on September 20, 1844. Her parents were John James Robinson, a shipwrecked English sailor, and Rebecca Kaikilani Prever, who was a descendant of the famous Hawaiian king Kamehameha I. Thus, Mary was related to Queen Liliʻuokalani, who was six years older, and was one of the monarch's closest friends. Mark P. Robinson, Mary's brother, served as Queen Lili'uokalani's Minister of Foreign Affairs. [1] It was a difficult time to be royalty in the Islands. During the period 1893-1896, the queen was forcibly and illegally deposed by agents of the American government, and eventually Hawai'i was made a protectorate of the United States.

Mary was educated at the O'ahu Charity School, which provided English-language instruction to children of foreign residents married to Hawaiians.

In 1860, Mary Robinson married Thomas R. Foster (1835-1889) of Nova Scotia, who had arrived in the Islands just three years earlier. He founded the Interisland Steam Navigation Company, and owned a shipyard, a shipping agency and a number of schooners. He died in 1889, leaving her a very wealthy widow, as she had also inherited substantial property from her father following his death in 1876.[2]

After her husband's death, Mary became interested in Theosophy, joining the Theosophical Society on May 12, 1882.[3] Initially a member of the Golden Gate branch in San Francisco, she soon organized lectures and classes in Honolulu. She helped to organize the Aloha Branch in February 1894, with Dr. Auguste Marques as lodge President. They also established several other study groups. Her brother Mark Robinson, a prominent banker and invester, became a member on May 23, 1884; he hosted Theosophical gatherings at his home.[4][5] Theosophical lecturers came to Honolulu. Countess Wachtmeister arrived in 1896. She and Mrs. Foster had been corresponding cordially. From February 13-19, 1901, the President-Founder Colonel Olcott visited, and his lecture on "The Divine Art of Healing" was attended by the former queen Liliʻuokalani, who was a good friend of Mrs. Foster. It was fortunate for him that he chose to remain in Hawai'i a few days. The ship Rio de Janeiro on which he had arrived, struck a rock and sank while leaving harbor. He continued his journey on the S.S. Coptic. [6]

Following his remarkable success as a speaker at the World's Parliament of Religions in Chicago, the Anagarika Dharmapala traveled by the steamer S.S. Oceanic via Honolulu, Japan, and Thailand as he returned to Ceylon. His ship stopped for a day in Honolulu in mid-October 1893, and a few local Theosophists met him:

Greeted and offered fresh fruit and flowers by Mary Foster, Auguste Marques, and an unidentified woman Theosophist, possibly Marie de Souza Canavarro, Dharmapala embarked on a short tour of Honolulu. Foster confided in Dharmapala about her uncontrollable temper and asked for advice. His counsel was evidently of great value to her as she commenced studying Theravadan Buddhism in conjunction with her Theosophical interests. A number of later newspaper accounts refer to Foster's traveling to Ceylon in 1893 and studying with the Buddhist monks at Anuradhapura, thereby horrifying her large kama'dina [native Hawaiian] family, who kept this fact secret.[7]

Dharmapala visited Hawai'i again in 1913, bringing Mrs. Foster the gift of a "Bo" tree for her garden. They met in person one final time in 1925.[8]

Mary Foster provided funding for repairs to Buddhist temples in India and Ceylon, and to numerous schools, hospitals, and training programs in South Asia and Hawai'i. By some accounts she donated over $300,000 dollars to Buddhist causes. These are some of the projects supported:

In Hawai'i, Mrs. Foster also gave land on Pali Highway to the Japanese Buddhists' Honpa Hongwanji Mission, where the first Buddhist temple in Honolulu was built in 1889; and she supported the Hongwanji High School.[14]

The garden at Mrs. Foster's residence was planted with indigenous flora and ornamental specimens. She lived at 50 North Vineyard Boulevard, Honolulu for several decades after she and Captain Foster purchased the property in 1884 from a German botanist, who had nurtured the collection of flora for 30 years. Mrs. Foster purchased additional land and consulted with botanists to identify the varieties of plants.[15]

Giant lumbering Galápagos tortoises used to make their way amid the tropical terraced trails, with a niece or nephew of Mrs. Foster on their wide, smooth backs. The tortoises were a gift, like many of the plants, from visiting sea adventurers. When Mary Foster passed away the Galápagos tortoises went to the zoo.[16]

Dharmapala brought Mrs. Foster a cutting from an ancient tree planted in 288 B.C. at the Mahabodhi temple in Anuradhapura, Ceylon, that is a direct descendant of the famous "Bo" tree (Ficus religiosa) under which Gautama Buddha attained enlightenment. From the tree that took root in her garden, several other bo trees were provided to other gardens at Hawaiian Buddhist viharas and to the University of Hawaii - Manoa campus.[17][18] At her death in 1930, the property was bequeathed to the city of Honolulu as its first botanical garden.

At times Mrs. Foster traveled to San Francisco, and she may have also visited South Asia again. She spent time in Oahu, as well, where she established a land trust to save ahupua'a 'o Kahana, a beautiful wooded tract, from ranchers who wanted to burn it to create grassland. "Today it is run as a state park, which embraces and teaches Hawaiian culture."[19]

In her final year she lived with her younger sister, Victoria Ward, and the sister's three middle-aged daughters, in Honolulu.[20] Mary died on December 20, 1930.

Mrs. Foster is also mentioned in the song, "Beautiful Kahana" in these lines: