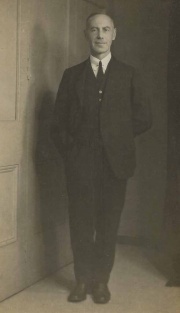 Captain P. G. Bowen was an Irish theosophist and hermeticist, and a distinguished writer on linguistics and the occult. He was the son of Robert Bowen, a personal pupil of Helena Petrovna Blavatsky.

Gilman Beamish Bowen was born on June 29, 1882 at Cleady House, Kenmare, County Kerry, Eire. It was many years later that he adopted the name "Patrick," and began signing his works as "P. G. Bowen." He was the youngest son of Robert Bowen, a gentleman farmer and scholar, who was then about 67 years old. The family belonged to the Church of Ireland (Anglican). The 1901 Irish Census shows him at age 19 living with his parents and sister, but he soon joined the military.

Young Bowen was expected by his family to pursue a scholastic career. He did not like the prospect, and "left Ireland for South Africa, where he became attached to the Intelligence Department of the South African Mounted Rifles."[1]

He sailed from Southampton on 7 Sep 1901 on the Raglan Castle to Natal, South Africa. His brother Robert, a doctor, left for South Africa a few months earlier. This is during the Second Boer War between the British Empire and Akrikaans settlers. In South Africa, Gillman joined the Natal Police. This force was disbanded in 1913 and he apparently transferred to the South African Mounted Riflemen.[2]

In 1915, Bowen, then a Sergeant in the command of General Botha, gave this account of a forced march during the Second Boer War:

All this country is a desert. Namaqualand is a sandy waste; no vegetation except stunted bushes and flowers. Scarcely any water. All the water obtainable is brackish and only drinkable under the influence of extreme thirst. Little Bushman Land is, however, far worse. It is a waste of fine sand and salt, without water or vegetation. It is said to rain there about once in five years. Great Bushman Land, which lies further inland, is worse. There it never rains... We marched during the night. We had no sleep for thirty hours, and harassed by exhausted animals, deep sand and darkness, we had the most miserable march I had ever done, though worse was to come....The scenery about the river might serve as a landscape from hell. Nothing but fine white sand, studded with black rocks, kopjes and mountains. We had no tents, and used to contrive little shelters with a blanket and a couple of rifles. The heat in the daytime was terrific, but so dry was the air that you did not seem to perspire... In the evening we set out again across the worst of the desert. A vast low lying basin of fine shifting sand twenty miles or so across. Some imaginative individual christened it 'The Valley of Dry Bones,’ from the number of skeletons lying about. We marched through the night at about two miles an hour. We had to halt frequently to let our exhausted transport animals rest. At each halt both men and horses used to throw themselves down and rest together. At once everyone was stretched on the sand asleep. It was wonderful to – see men lying with their heads pillowed on their horses, and, in several cases, horses lying with their heads on their masters’ bodies.[3]

The years in Africa led Bowen into spirituality, linguistics, and scholarly writing:

It was during this period that he acquired the deep interest in native dialects and modes of thought that formed the sum of his work in later years. He spent over 20 years in Africa and his aptitude for native languages brought him into contact with the real rulers of the tribes. Thus he met an Atlas Berber, an initiated teacher, Mehlo Moya, and was admitted into his Occult Brotherhood. The higher grades of attainment amongst them were spoken of as ‘Those who Know’, and above these, at the apex of the hierarchically ordered organisation was said to be ‘The Ancient One’. P. G. Bowen was permitted to copy and publish three fragments, translated from a document in an archaic Bantu language (Isinzu), which comprise the present volume [From the Sayings of the Ancient One] and which mirror the re-cognition, progress and evolution of the SOUL. Here is a gateway to the PATH for all Truth seeking students, without straying in strange or psychic by-paths. It is of special interest that these fragments point to a connection and common origin with the source from which stem all Esoteric traditions.[4]

Relationship to his father

I knew nothing of my father as a Theosophist until I came to England eight years ago, in my fiftieth year, and then came into possession of his papers. He had specified that I was not to read these until I had reached the half century.[5]

He [Robert Bowen] was, I should mention, close on 70 when I was born [1882]. I did not know much of him in my youth and discovered his occult connections only since leaving Africa and coming into possession of his papers.[6]

Bowen first became acquainted with Theosophy when he met Irish members. There is no record of Bowen actually becoming a member of the Theosophical Society, but his writings were highly Theosophical in nature.

It was after the Great War – during which P. G. Bowen saw service both in South Africa and France – that he first met the late George Russell (A.E.).

The two men, linked by their common interest in the mystic and the occult, became fast friends and worked in close collaboration after P. G. Bowen’s return to Ireland in 1922. When A.E. departed for America in 1935, shortly before his death, he nominated P. G. Bowen to the Presidency of the Hermetic Society in Dublin, which he had opened in 1885, as a branch of Anna Kingsford’s London ‘Hermetic Society’, and which became a focus of the Irish Literary Renaissance. The foremost members of this Society were Charles Johnston (who married H. P. Blavatsky’s niece in 1888), the able translator of the Bhagavad Gîta, the Yoga-Sûtras of Patanjali, etc., Stephen Mackenna who translated the Enneads by Plotinus, the poets and authors James Stephens (The Crock of Gold), Fiona McLeod and W. Butler Yeats (whom Charles Johnston had introduced to Theosophy). W. Q. Judge, born in Dublin in 1851, the co-founder of the Theosophical Society in America, was a close friend of A.E. and the ‘Hermetic Society’ members, and helped to kindle the flame of the Irish Literary Renaissance. [Note that Robert Bowen was involved with this group, decades earlier, and worked with Dr. Kingsford on Greek translations.]

In 1933 “at A.E.’s request” P. G. Bowen published the remarkable book on the inner life The Occult Way, the chapters of which are veritable lessons in practical occultism. P. G. Bowen, whose reputation is now world-wide, passed away on 30th July 1940. Whatever he wrote seems to be spiritually ‘charged’ and yet is intensely practical. As he says of all inspired works “They are not mere guide books setting out the configurations of the universe, they are FIELDS OF EXPERIENCE wherein CONSCIOUSNESS may exercise itself; and so gain DIRECT KNOWLEDGE of the laws of universal nature”.[9]

Captain Bowen wrote a few articles listed about Theosophy in the early 1930s. In addition, some of his works were reprinted or reviewed in magazines. The Union Index of Theosophical Periodicals lists them under the names PG Bowen and PGB Bowen. He also wrote Short stories for Wide World Magazine for Men and many papers to various occult journals.

H. K. Challoner quoted the letters of P. G. Bowen in his book The Sword and the Spirit: a Study of the Inner Meaning of the War. It was published in London by Rider in 1945.