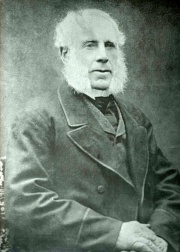 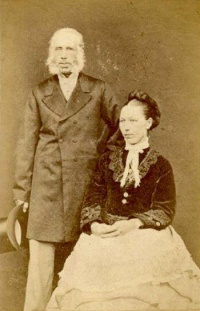 Robert Bowen was an Irish student of Theosophy who may have been a personal pupil of Helena Petrovna Blavatsky. He is known for the detailed notes about how to read her masterwork The Secret Doctrine.

Robert Bowen was born in 1815 or 1816 at Cleady House, Kenmare, County Kerry, Ireland.[1] One biographer declared that his education was in Jesuit schools.[2] However, his family was not Roman Catholic, but Protestant members of the Church of Ireland, so the Jesuit education seems unlikely.[3]

Robert had to work to support his two elder sisters until they married. It was the usual custom for sons of the landed gentry to enter the Diplomatic Service until they themselves inherited their properties. But a researcher at the Foreign and Commonwealth Office verified he held no position in any capacity with them. Robert's father lived a long life and so Robert did not become the gentleman farmer until later in his own life, not marrying until he was in his fifties.[4]

The memoirs of Bob Maybury state that Bowen was "a strong home-ruler," or advocate of home rule for Ireland within the United Kingdom.

Bob was even asked about him when he visited Kenmare in 1975, nearly 70 years after his death. He apparently often reduced rents due to unfortunate circumstances such as a “bad harvest” or “the loss of two cows”. Bob describes him as “deeply religious” but not one who accepted all the dogma of the church. He was apparently interested in the idea that the dead might be able to communicate with the living and even made a pact with a friend, who died first, that he should attempt to communicate with Robert after death. He was also interested in horticulture and herbalism.

Given the general economic situation it seems likely that the family were becoming progressively less prosperous. The Great Famine (1845-52) made it impossible for some of the poorer tenants to pay any rent (even if they survived). Bob Maybury reports that Robert “had vivid memories of corpses lying at the roadside when they drove to church on Sundays”. There were apparently hundreds of starving people living in cabins along the road to Kenmare.

The Bowens would still have had to pay rent to Richard J. T. Orpen, who then paid Trinity College. A number of middlemen throughout Ireland went bankrupt during and after the famine. This may explain why Robert delayed his marriage until he was 50 years old. He may also have been waiting to inherit before looking for a bride. [5]

It has been reported that he engaged in a naval career for some years, possibly serving as a Purser. No record confirms this activity, however, so the title of "Commander" often accorded to him is probably inaccurate. A family member has stated:

Family sources say instead that Robert Bowen spent some time working in a brewery in Cork as a young man, but soon returned to the family home at Cleady, Kenmare, Co. Kerry, and was thereafter a farmer.[6] His own father died in 1860 and he inherited the bulk of the property as the eldest son (we have the will).[7]

In 1866 he married Elizabeth Ann Gillman Beamish, who was actually his first cousin through the Gillman lineage. The couple had six children, including Gillman Beamish Bowen, who was later known as Patrick or P. G. Bowen.[8] During those years, he engaged in a great deal of reading and writing, as a scholar of the Greek language.[9]

Involvement in the Theosophical Society

Mr. Bowen became interested in Theosophical Society in the early 1880s after meeting Dr. Anna Kingsford.[11][12] Around 1889, he claimed to have become a personal pupil of Helena Petrovna Blavatsky and "questioned her persistently about what attitude a student ought to take towards The Secret Doctrine. He made careful notes of the answers she gave him and subsequently read them over to her to make sure that he had not mistaken her meaning." These notes were published in the January-March, 1932, issue of Theosophy in Ireland after Bowen's son, Captain P. G. Bowen, brought them to light.[13] See Robert Bowen Notes.

I knew nothing of my father as a Theosophist until I came to England eight years ago, in my fiftieth year, and then came into possession of his papers. He had specified that I was not to read these until I had reached the half century.[14]

Another piece of biographical information about his father is found in a letter to Mr. MacKinnon, dated July 22, 1937:

He was, I should mention, close on 70 when I was born [1882]. I did not know much of him in my youth and discovered his occult connections only since leaving Africa and coming into possession of his papers.[15]

Involvement in other occult organizations

Robert's son, Capt. P. G. Bowen, claims that his father was "a member of the 'Club' mentioned by K.H."[16] in Mahatma Letter No. 11, which had been formed "for the practical teaching of magick" around the 1860s. Members included "some of the most advanced scholars in mesmerism and "ceremonial magick," such as Eliphas Levi, Regazzoni, and the Kopt Zergvan-Bey."[17]

P. G. Bowen continues to say that his father "was a very intimate friend of Anna Kingsford" and adds:

He states definitely that Anna Kingsford, in 1885 (I think) formed an Inner Group in her Hermetic Society, and in it were Wynn Westcott and MacGregor Mathers. There was another member whom my father often mentions as ‘X’, or ‘A-A’ and sometimes as ‘Druid friend X’ or simply ‘The Druid’, and this person it was who brought the ‘Club’ material to A[nna]. K[ingsford]. Westcott and Mathers were given access to it, and later made it the basis of the Golden Dawn rituals.[18]

After P. G. Bowen returned to Ireland in 1922, he became friends with George Russell (known as A.E.):

When A.E. departed for America in 1935, shortly before his death, he nominated P. G. Bowen to the Presidency of the Hermetic Society in Dublin, which he [A.E.] had opened in 1885 as a branch of Anna Kingsford’s London ‘Hermetic Society’, and became a focus of the Irish Literary Renaissance. The foremost members of this Society were Charles Johnston (who married H. P. Blavatsky’s niece in 1888), the able translator of the Bhagavad Gîta, the Yoga-Sûtras of Patanjali, etc., Stephen Mackenna who translated the Enneads by Plotinus, the poets and authors James Stephens (The Crock of Gold), Fiona McLeod and William Butler Yeats (whom Charles Johnston had introduced to Theosophy). W. Q. Judge, born in Dublin in 1851, the co-founder of the Theosophical Society in America, was a close friend of A.E. and the ‘Hermetic Society’ members, and helped to kindle the flame of the Irish Literary Renaissance.[19]

Robert Bowen was also involved with this group many years earlier. According to P. G. Bowen, Robert was "connected with the Hermetic Order of the Golden Dawn in the early 90’s" and all this information comes "directly from manuscripts left by my father."[20]