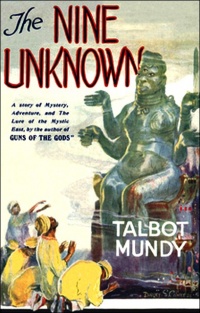 Cover of The Nine Unknown

Talbot Mundy was the nom de plume of William Lancaster Gribbon (April 23, 1879 – August 5, 1940), an English novelist and short story writer. He was a friend of Katherine Tingley and joined the Point Loma community.

According to Emmett Greenwalt:

Mundy was born in London in 1879, educated at Rugby, and served as a government official in India and South Africa. He became fascinated by the occult in the Orient, and his curiosity drew him also to Mexico, as far south as Yucatan. He arrived in the United states about 1911 and decided to become an American citizen.[1]

During the 1920s, Mundy purchased "the Cliffs" on the Point Loma estate. He joined Katherine Tingley's cabinet and wrote for her magazines.[2]

Ted G. Davy quoted a letter from Boris de Zirkoff about the writer:

Talbot Mundy was an old friend of mine (much older than myself, of course); we became pals in Point Loma when I arrived there. He was a royal sort of chap! ... You may know that his book Om was written in Point Loma, and some of its characters are taken from the residents there. Many of the "Lama's" sayings are Katherine Tingley's sayings and thoughts.[3]

Talbot Munday was a prolific and influential writer.

Mundy's best-known novel was King of the Khyber Rifles, which became a Hollywood film in 1953. His adventure writings were influential to many writers of science fiction and fantasy. He also wrote under the pseudonym Walter Galt. These are a few of his novels, from a more comprehensive list in Wikipedia.

The Union Index of Theosophical Periodicals lists 37 articles under the name Talbot Munday.

Emmett A. Greenwalt wrote of Mundy:

Of the half-dozen novels written while he was an active member of the Hill [Lomaland], perhaps Om, the Secret of Ahbor Valley (Indianapolis, 1923), most clearly shows the theosophical influence. As James Hilton was to do after him, Mundy picked Tibet as the locale for his mystic tale. it followed the now familiar pattern of an Englishman, dissatisfied with the indoctrination of empire, who chose to sit at the feet of a wise old lama and learn of the Masters...

After the death of Katherine Tingley in 1929, Mundy drifted away from Point Loma, although he remained sympathetic with the teachings of Theosophy. His books sold well, and he continued writing and publishing almost to the day of his death in 1940, producing about thirty-five principal works in all.

It is probably too early to assess the literary importance of Talbot Mundy, but there is some basis of comparison between him and a novelist of the preceeding generation, Francis Marion Crawford. Both were world travelers; both were prolific in their output of novels; both enjoyed an international reading audience, some of Mundy's novels being translated into French and German, and his equally popular short stories into Swedish, Hindustani, and Japanese. Neither has yet been considered an author of the first rank, and time must tell whether Mundy's position will reach even that of Crawford's. Yet both served to focus the novel-reading eyes of the West upon the occult claims of the East.[4]