An archetype is a universally understood symbol or pattern upon which others are copied, patterned, or emulated. In psychology, an archetype is a model of a person, personality, or behavior, while in philosophy, especially with Plato, it refers to the ideal form of the objects. Archetypes are often used in myths and storytelling across different cultures.

The archetype in Plato 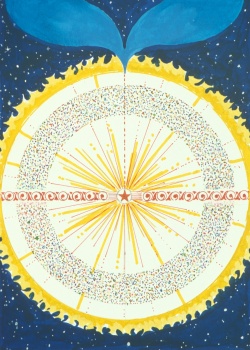 James S. Perkins painted his visualization of the Archetypal Universe, and wrote about it:

With the third step down into material manifestation, the Logos unveils the Archetypal Universe. Here is revealed the supreme vision of Life, perfected in every particle, in a harmony of the whole at the end of time...

We see the Star of the Solar Logos radiating the universe. The Light of Adi is establishing the boundary of that is to be. The fiery sea of Anupadaka containing the Monads is symbolized by the blue circle filled with sparkling points. The horizontal element composed of small scrolls represents the Archetypal Universe "unfurling from East to West." High in the Atmic plane the Radiant One establishes the centers against which nothing can prevail. From these eternal focuses the Solar Universe unfolds.

With the projection of this Authentic Universe in embryo, the direct action of the Logos in the evolutionary process ceases. The ultimate archetypes therefore cannot be thought-forms; they are mighty Will-centers at the Atmic level; force-vortices that are weaving glorious geometric patterns that become the matrices for the forms evolving in the lower planes of matter. Each matrix exerts a natural lawfulness of being that guides, and ultimately prevails, in the evolving forms...

The abstract Creation is formless yet radiant with an infinitude of potential forms - all that my be possible in the evolving universe. An archetype's basic vibration flashes forth its potential rhythms, and the Sea of Life responds with glories of sound, color, and form. The Ideal flows from within, and Nature's response, its path of holiness, is the evolving of form in resonance with its archetypes.[1]