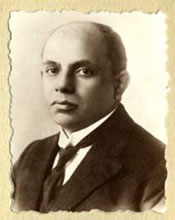 Burjorji Jamaspji Padshah (May 7, 1864 - June 20, 1941) was a Parsi Fellow of the Elphinstone College of Bombay. He was a notable citizen in the worlds of education, science, and industry, and was said to be the brain behind the Indian pioneer industrialist who founded the Tata Group, India's biggest conglomerate company. He joined the Theosophical Society as a young man and was put on probation, but he soon lost interest in Theosophy.

B. J. Padshah should not be confused with Sorabji J. Padshah, another early member in the 1880's.

Burjorji J. Padshah was born in Bombay on May 7, 1864, in a high talented family. He went to the Elphinstone College of Bombay and graduated in 1884, standing First in First Class, and carried away the Cobden Medal in Political Economy. His mother wanted him to enter the I.C.S. as his elder brothers had done but Burjorji departed from the beaten track and studied Theosophy.[1]

Mr. Padshah joined the Indian Section of the Theosophical Society around 1883, as a young man of 19.[2]

There is an early reference to "poor Padshah" by Master K.H. in October 1882, who stated: "He is a madcap, yet of excellent heart and sincerely devoted to Theosophy and — our Cause".[3] It is not clear, however, whether this refers to him or some other Padshah.

In 1884, with the money he inherited from his father, Mr. Padshah accompanied the Founders, Mohini and Babaji to Europe.[4] After the Hodgson Report, however, he suffered a crisis of faith. It seems that this was part of his probation. Mme. Blavatsky wrote to Mr. Sinnett:

Poor Padshah! All his efforts, struggles, his sacred vows — all, all gone because his fifth principle is so developed and drags him to Cambridge, while his sixth is dormant, half blind and is unable to FEEL the Master. Poor Boy! why can't people separate wretched me from the Masters, why not despise, spurn me, spew me out from their mouth but remain true and loyal to TRUTH incarnate. I do feel sad for those who are good and yet fall off.[5]

Poor, poor Padshah — he is lost! There's a trial for him! What next? Why if those are their proofs, then they are worthy indeed of being noticed!

Only write to poor Padshah a kind letter. Tell him he is ruining all his prospects — his young life for ever; by not withstanding and having the best of his probationary trial. He has cut his hair and now he is cutting the last blade of grass under his feet. I do feel such a pity for the poor good boy. He is so honest -- so earnest![6]

He finally left the Society and went to Cambridge for the study of higher mathematics. There, he studied under Henry Sidgwick, the English utilitarian philosopher and economist. He remained a total abstainer, a non-smoker and a vegetarian, showing great concern for animal welfare.

In 1931 Burjorji left the Tata Group in which he had been working since 1894. He then began touring round the globe. His passport described his occupation as "Traveller". He passed away on June 20, 1941, at the age of 77.

In December 1941 an obituary was published in The Theosophist stating the following, in part:

He had greatly the quality of wholehearted enthusiasm, caring nothing for jeers at his eccentricities of behaviour, for he brooked no compromise with ideals. Thus, having become convinced of the wrongs suffered by animals under human exploitation, he went so far as to refuse to wear leather foot-wear of any kind, taking great trouble to get substitutes. Still to more personal inconvenience, he would not ride in a horse-drawn vehicle, but would trudge long distances on food, until his friend Mr. Tata procured for him the first automobile to appear in India, one driven by steam. . . . All testify to the purity--almost asceticism--of his life, and that he was ceaselessly occupied in well-doing, serving his country and his brother man in a truly Theosophical spirit.[7]

Modest by temperament and absolutely impervious to all ordinary human attractions such as the collection of money or the desire for distinction, he lived a simple, natural and selfless life. His existence was really an embodiment of the principle of “plain living and high thinking.” He never cared for reward or appreciation. He pursued learning and acquired culture for their own sake, and ceaselessly did all he could, according to his own ideas, for the advancement of his country and the good of humanity.[8]