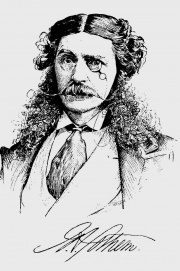 Charles Sotheran (1847–1902) was present at the founding of the Theosophical Society in September, 1875, when he was elected Librarian of the new organization.[1] He was an antiquarian, bookseller, and journalist.

Charles Sotheran was born on July 8, 1847 in Newington, London.[2] On January 2, 1869 he married Mary Eva MacManus, whose family came from Belfast.[3] In 1873 they immigrated to the United States. They had several children. Sotheran became a naturalized American citizen. After Mary Eva died, Sotheran married Allice Rhyne on October 17, 1893.[4] She was also a writer and journalist; they lived in Manhattan.[5] He died on June 26, 1902 in New York.

He was related to the famous London booksellers of the same name that has now been in business for over 250 years. He was with Sabin and Sons, Book-sellers, in New York, and was connected with their journal The American Bibliopolist.

Charles Sotheran was present at the founding of the Theosophical Society, and was established as one of the first members on November 17, 1875.[6] He was responsible for bringing John W. Lovell into the new organization. Mr. Sotheran was appointed along with Henry J. Newton and H. M. Stevens to a committee instructed to draft a constitution and bylaws.

Historian Josephine Ransom said of him:

His temperament kept him and his friends in a turmoil. Three months after The Society was formed there was trouble, as Sotheran not only made inflammatory speeches at a political street meeting, to which H. P. B. objected, but he wrote bitterly in the newspapers against her and The Society. His resignation was accepted, and for the sake of protection, The Society was made into a secret body, with signs and passwords. Six months later Sotheran apologised and was taken back into membership. He gave useful help to H. P. B. in finding quotations and borrowing books for her during the writing of Isis Unveiled. Sotheran later published a small short-lived journal called The Echo. He became a considerable nuisance to H. P. B. and H. S. O., and after their departure to India was not again mentioned.[7] 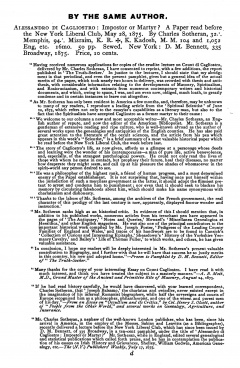 Membership in other groups

Sotheran was initiated as a Freemason on April 8, 1872, in the United Grand Lodge of England.[8]According to an advertisement for his book on Cagliostro, Sotheran was also active in the English Brotherhood of the Rosie Cross, in Egyptian Rite masonry, and other organizations. See the illustration at the right.

After leaving the Theosophical Society, Sotheran helped to organize the Socialist Labor Party and ran for Congress in 1894, in New York, on a populist ticket. He was expelled from the SLP and joined the Socialist Party.[9]

Sotheran wrote for New York papers including The Sun and The World. He also wrote books: