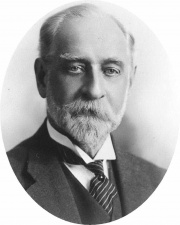 John Wurtele Lovell (1851-1932) was an early Theosophist among the Founders of the Theosophical Society in New York City.

John Wurtele Lovell was born November 6, 1851 in Montreal, Canada. His father, John Lovell (1810-1893), was a publisher who had immigrated from Ireland. He and wife Sarah had eleven children. By age 21, the second son, John Wurtele, had run his father’s large Canadian printing plant and in 1873 he was sent to manage a printing plant in Rouse's Point, New York, just south of the Canadian border. On August 21, 1876 he married a local girl, Caroline ("Carrie") Francis Crook (1851-1927). Lovell was naturalized as an American citizen on November 22, 1878, and by 1880 the couple had moved to New York City. They had twins who died in infancy, then four more children, living in New York and sometimes in New Jersey.[1][2][3][4][5] 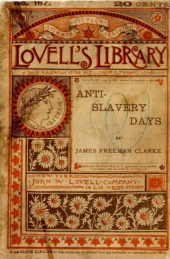 In 1876, John, his father, and G. Mercer Adam formed the publishing firm of Lovell, Adam & Company. This venture was followed by various other partnerships and firms, often involving his brother Frank. The John W. Lovell Company was established in 1881, located in New York City. It published a wide variety of books, taking advantage of the lack of international copyright laws to reprint popular titles of the day such as novels by Charles Dickens, Jules Verne, James Fenimore Cooper, and Rider Haggard. The Lovells reprinted many series for children such as the works of Thomas Mayne Reid, the Tom Brown books, Horatio Alger, and wild-West adventures.[6] They also published works of some Theosophical authors, including Mabel Collins, Anna Bonus Kingsford, and Franz Hartmann.

It was in September, 1875, that I first heard of the proposal to start the Theosophical Society. I was living at that time at Rouses Point in the Northern part of New York State, where I had a large printing office and book manufactory, doing work for publishers in New York, Boston and Philadelphia. Amongst these was the firm of J. Sabin & Sons, who published a small magazine I printed for them. This was edited by Mr. Charles Sotheran, and necessarily I was brought in close relations with him. I must have told him I had become interested in psychic phenomena for, on calling on him on the 23rd day of September, 1875, in connection with the work I was doing for his firm, he told me that he and some of his friends were getting up a Society for the investigation of psychic phenomena to be called the Theosophical Society, and invited me to become a member.

I told him I would be very glad to do so though, living so far away, it was doubtful if I could be present at many of its meetings. On asking about dues, he said that an initiation fee of $5.00 was all that had been decided on. I handed him this for which he gave me the receipt, a facsimile of which appears on page 39 of "The Golden Book of the Theosophical Society" and he said he would have me elected a member at the next meeting, October 8th. At that meeting, I think it was, Col. Olcott had a resolution passed that all those who became members previous to final organization should, with the sixteen who attended the first meeting on September 8th, be considered Founders of the Society. So, in this way, I because one of the Founders, though in later years the name was only used to apply to Col. Olcott, Madam Blavatsky and William Judge." [7]

Both John W. Lovell and his wife Carrie were members of the Aryan Theosophical Society when they lived in New York, so their relationship with William Quan Judge clearly continued.[8][9] In 1925, Mr. C. Jinarājadāsa wrote of Lovell:

One interesting link with the past is Mr. John H. Lovell, acting now in 1925 as the Treasurer of the New York Lodge. Mr. Lovell joined the T. S. on September 23, 1875, and still holds the receipt issue to him by C. Sotheran, then acting as Secretary, though the eleciton of the permanent officers of the Society took place on October 30. Mr. Lovell is the only member now living of the first year of the Society to greet its Jubilee.[10]