Among the early members were Theosophical Society Founder John W. Lovell and his wife Carrie;[2][3] Claude Falls Wright was a member,[4] and Katharine Hillard.[5] Julia Keightley joined in 1886.[6]

William Quan Judge was president of the group. The Path reported in January, 1889 that Mr. Judge had just been re-elected to office, but that he was "absent in Europe upon family business." The Vice-Presidency was conferred "upon a lady-member who always adorns the meeting-room and sometimes the reading-stand,_-- Miss Lydia Bell."[7]

After the death of Mr. Judge in 1896, Claude Falls Wright was elected president.[8] 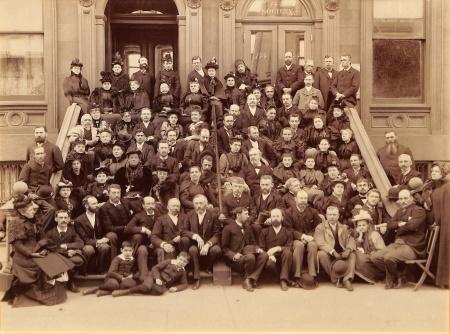 The T. S. Headquarters in New York is but the second case in the Society’s history where a building exclusively for Theosophical purposes has been purchased. That in London is held upon lease, and only the General Headquarters at Adyar has hitherto been owned. As has been stated in the appeal made to American F. T. S. [Fellows of the Theosophical Society], the house is 144 Madison Ave., between 31st and 32nd streets, 70 ft. deep and 25 ft. wide, four stories and basement, the front of brown stone. The cost was $42,500, of which $33,000 were raised by mortgage, and about $2500 have been required for alterations and repairs.

The front basement is devoted to the Aryan Press, and to it runs a speaking-tube from the General Secretary’s office; the back basement is for janitor and wife. A portion of the hallway on first floor is arranged commodiously for the Aryan Library, but otherwise the floor has been thrown into one large room for the weekly meeting of Tuesday. It will seat about 190, settees and chairs being used. The paper is cheerful, electric lights spring from the walls, the platform gives space for the officers and a lecturer, and abundant ventilation has been provided. This hall will also be used for social gatherings of the members and for public lectures upon Theosophy, and part of the heavy expenses of the house will be raised by its rental to Literary Societies, Executive Boards, etc., on other evenings.

The front hall-room on second floor is the private office of the General Secretary of the American Section, and the large room adjoining is the public office, where are the Assistants and also the Circulating Library and documents. The two large back rooms are for the PATH and for storage, a bathroom being at the end of the passage.

The two front rooms on third floor are for private business and classes: the two large rooms back constitute the General Headquarters. Here will be the various pictures and albums, and whatever gifts it may please F. T. S. to make for use and adornment, and probably here will be constructed the receptacle wherein is to be preserved America’s share of the ashes of H. P. Blavatsky. These rooms will be open day and evening for visitors, a Register for whom will be provided, and here Theosophists may at any time come for conference, reading, rest. The hall-room has not yet been assigned.

The fourth floor contains six bed-chambers and a store-room. The former are devoted to tenants, all men and Theosophists, some of whom are assistants in the work, and all paying rent. All through the house is an abundance of closets. Gas is used everywhere except in the meeting-hall.

The purchase of this building is not merely a triumph of Aryan T. S. energy, it is an era in the Theosophical movement in America. Nor does it mean merely the stability and reputation which come from landed property; it means the broad and extending work which only such an establishment can make possible...[9]

Mr. Judge, as president, decided to start a library:

I have decided to start at Headquarters, on the third floor, a reference library for the use of Theosophists and others properly endorsed, and have begun it with The Path, Bhagavat-Gita, Twelve Upanishads, Occult Sciences, Eastward or a Buddhist Lover, aud Indianapolis Letters on Theosophy. It is intended to make this a complete Theosophical library and to have it accessible at all hours. No books can be taken from the room. Other works will be added as received, and donations of such are asked for, either new or secondhand. A copy of Isis Unveiled is already promised. When the existence of this library is generally known, doubtless it will be very much used, as the other two, one being specially for circulation and the other for sole use of members of the Aryan T. S., cannot be consulted on the premises. In time stationery, ink, and other library adjuncts will be placed in the room as we have the funds to warrant them.[10]