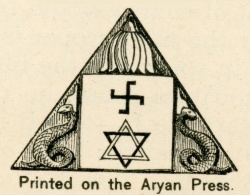 James Morgan Pryse and John Morgan Pryse, brothers originally from Cincinnati, were recruited by Judge to operate the press. They had experience operating newspapers and printing plants in Nebraska, Montana, Wisconsin, and California.

According to James Pryse, the Press was initially established to print the Esoteric Instructions of H. P. Blavatsky:

My brother John and I, returning from a trip to South America, landed in New York City, We found Mr. Judge perplexed by a difficult problem: H.P.B. had directed him to send her Instructions to all the American members of the E.S., but had sent him only one copy, and he had no facilities for making the many copies needed. We solved that problem for him by establishing the Aryan Press [6] and printing the Instructions in book-form. Then, in response to a cable from H.P.B. I went to London to do the same work there, and started the H.P.B. Press....[1]

At the beginning of 1890, an announcement appeared in The Path:

The attention of our readers is drawn to the fact that the Aryan Press is now in full working order, and prepared to promptly execute all orders which may be received, -- Bill heads, Circulars, Address Cards, and and every description of Commercial and Private Printing undertaken at cheap rates.

The Aryan Press being a Theosophical Co-operative Press, all members and Branches subscribing $10 are entitled to have their work done at cost price.

After Katherine Tingley became head of the newly renamed Universal Brotherhood and Theosophical Society, the publishing operations were moved to the Point Loma community in 1900, "locating it downtown because Point Loma was not yet supplied with electricity."[3]

In 1906, the power lack on the Hill having been partially met, she [Tingley] built her large Theosophical Publishing House in a Loma canyon overlooking the Pacific Ocean. An improved linotype was installed, a bindery was added, and within a few years' time a photo and engraving department, adjacent to the press, was making all the blocks, cuts, and plates for theosophical publications.[4]

In its early years, the press printed purely Theosophical books and periodicals. After the move to Point Loma, many other forms of literature were published, including children's books, fiction, and scholarly studies of many disciplines. A series called Theosophical Manuals was published in English, Spanish, and French. They were not all the product of a single pen, but written by a number of different students at the international headquarters of the Universal Brotherhood and Theosophical Society. Other important series were the Department of Branch Work papers and the Papers of the School of Antiquity.

Theosophical works in Spanish and French

Other nonfiction including Papers of the School of Antiquity