Mrs. Tingley was born July 6, 1847, Newbury, Massachusetts, to James P. and Susan Westcott. She was a social worker and did relief and emergency hospital work during the Spanish American War. She was later instrumental in opening hospitals in Cuba and the Philippines. Mrs. Tingley worked with children, particularly orphans, throughout her career.

On February 13, 1900, she transferred the Society's international headquarters from New York City to the new colony at Point Loma.

Mrs. Tingley served as editor of several periodicals, including The Theosophical Path and The New Way. The Union Index of Theosophical Periodicals lists 6 articles under the name Katherine A. Tingley, and she may have contributed more anonymously. There are also 125 articles under the name Katherine Tingley that are reprints of her writings and lectures, mostly in Sunrise magazine.

She also wrote several books and compilations of speeches: 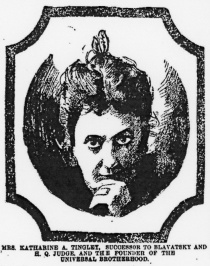