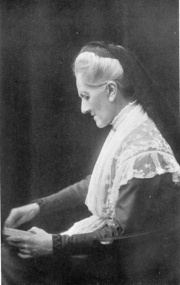 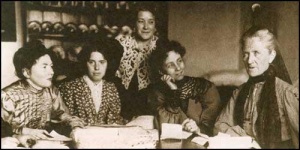 Charlotte Despard was an Anglo-Irish writer and social activist.

Born Charlotte French, 15 June 1844, third daughter of five and one son of Captain John Tracey William French (d. 1854) and Margaret (d. c.1865). Charlotte grew up lacking a formal education as was common for girls in Victorian England, a cultural habit she lamented. At approximately 19 she attended a finishing school in London. By this point her father had passed and her mother suffered a mental breakdown requiring institutionalization.

Charlotte married on 20 December 1870. Her husband, Maximilian Carden Despard (1839–1890), was a wealthy Anglo-Irish businessman and social radical who encouraged Charlotte to write. She wrote ten novels, seven of which were published. One of the earliest was Chaste as Ice, Pure as Snow (1874). One of the most famous was The Rajah's Heir, a novel (1890). Charlotte and her husband traveled Europe and India extensively. Yet, they never had children. She became a widow in 1890 when her husband was lost at sea. Losing her husband seems to have opened up possibilities for Despard for just after mourning for a few months she relocated to London slums and began working earnestly to bring relief and education to the poor. 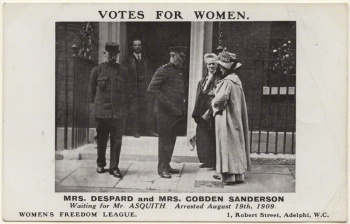 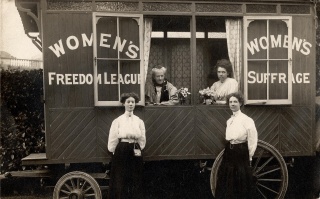 Despard’s earliest effort at social reform was establishing one of the first child welfare centers on 2 Currie St., Nine Elms, London, a location she maintained for almost two decades, a working men’s club, became a Poor Law Guardian in Lambeth, London, in 1894, and joined the Labour Party. She was known to wear simple black clothing and sandals. During this time she also became a suffragette joining the National Union of Women's Suffrage Societies (NUWSS). She and other members of the Women's Social and Political Union (WSPU) founded the Women's Freedom League:

it went on to become one of the largest British suffragette organizations gaining a membership of 4,000 soon after its founding in 1907. While the WFL wasn’t violent, it was militant: Led by vegetarian Charlotte Despard, members refused to pay taxes, citing lack of representation.[1]

By 1916, the Women's Freedom League had established the vegetarian Minerva Café, "which was part of a larger facility of meeting rooms and lodging. A surprising number of British suffragettes were vegetarians, and had been even before campaigning for the vote... While fighting for the right to vote, many passionately argued against vivisection, wearing fur coats and stuffed-bird hats, and eating meat."[2] The café was home to several feminist groups, as well as anti-war activists, anarchists, socialists, and naturists.[3] 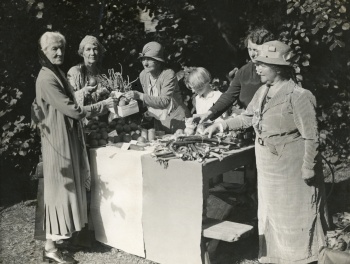 Despard, embracing her Irish heritage, converted to Roman Catholicism at the end of the 1890s and also joined the Theosophical Society on April 4, 1899.[4]. In the February 1917 issue of The Herald of the Star, Theosophist John Scurr calls Despard the “Beneficent Fairy of Nine Elms,” describing how she helped women save money, facilitated by the Married Women's Property Act of 1882. Prior to the act, the husbands owned the earnings of their wives and often took it for alcohol and other selfish desires. The act let wives designate Despard as the trustee of the funds, protecting their earnings from their husbands. Similarly, Scurr discusses how Despard cared for children injured through labor or play. “It was a lesson to anyone who is leading a soft, comfortable existence to see how children of seven or eight bore unflinchingly and with a brave face the smarting pain when ointments and lotions were applied.” He also describes her suffrage efforts and other work for the rights of women and the working poor. Seeming to fully embody Theosophy’s core principle of selflessness, Scurr ends writing of Despard, “Love and service are the dominant passions of her life. When the history of this time is written no one will occupy a higher place than the beneficent fairy of Nine Elms— Charlotte Despard.”[5]

Despard also maintained an interest in other esoteric and occult organizations in addition to the Theosophical Society. Light, A Journal of Psychical, Occult, and Mystical Research, notes that Despard gave a speech about “The New Womanhood” to The London Spiritualist Alliance, and organization which other theosophists participate, including A.P. Sinnett. Similarly, she gave the lecture, “The Spiritual Ideal of Womanhood” at the Ninth National Conference of Spiritualists, 2 July, 1911. And the June 1905 issue of the Journal of the Society for Psychical Research lists Despard as a new member. 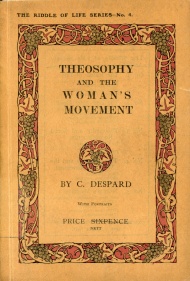 Theosophy and the Woman's Movement

Her most well-known Theosophical publication is her Theosophy and the Woman's Movement (1913). 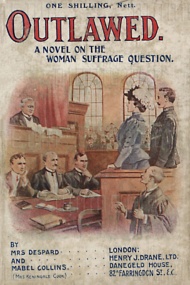 Despite her husband's death, Despard continued writing, although many of her works shifted from fiction and were centered on women’s rights and suffrage. Continuing with fiction, Despard co-authored, Outlawed. A Novel On The Woman Suffrage Question (1908) with fellow Theosophist, Mabel Collins (1851–1927).

The Union Index of Theosophical Periodicals lists 4 articles by or about Charlotte Despard. 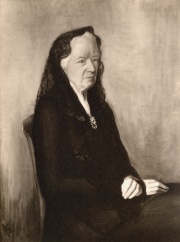