Emily Kislingbury was born in Holborn, Middlesex, England, on October 31, 1840, to William Kislingbury, a wine merchant, and his wife Maria Pink Kislingbury. The family had two brothers and two sisters. The household was large: in 1841 there were five "assistants in the trade" and four servants living with the family.[1] Emily attended a boarding school in Kent.[2] She was employed at times as a "daily governess" or "daily teacher," or tutor.[3][4] She never married. 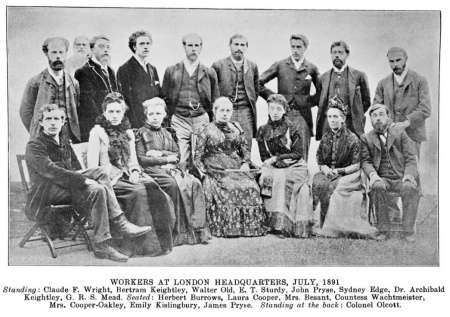 In February, 1877, Miss Kislingbury joined the Theosophical Society. At the time, she was the secretary of the British National Association of Spiritualists of London. In August of that year she went to the U.S.A. on a holiday, and wrote a letter to H. S. Olcott from Niagara Falls to announce her arrival in New York and her desire to meet the Founders. When Col. Olcott opened the letter he found at the bottom of the last page a precipitated message from Master Narayan saying:

She is a sweet, truthful, sincere nature. Would to heavenly powers there were a few more like her in London. Teach her and take care of her.


Tell her I was several times with her at the Hdqrs.[5]

"Headquarters" evidently refers to the offices of the Spiritualist Association, in London, since the British Theosophical Society was not yet established.

During her stay with the Founders she witnessed several phenomena performed by Mme. Blavatsky. After returning to London, in a speech she gave describing the phenomena, Miss Kislingbury talked about her friendship with HPB: "a friendship to last I hope for life and for ever, with the being called Madame Blavatsky".

On December 11, 1877, she met in London with C. C. Massey, W. S. Moses, and J. S. Cobb, to read Col. Olcott's instructions concerning the formation of a Branch. On June 27, 1878, the British Theosophical Society had its first meeting and Miss Kislingbury is chosen as Secretary.

In May 1878, Mme. Blavatsky wrote in a letter to Hurrychund Chintamon:

Another brave loyal heart is Miss Emily Kislingbury, secretary, guiding spirit and in fact soul of the B.N.A. of Spts. She has courage enough to make herself a heroine, and her motives and character are as pure as gold. But, like most women her emotional nature calls for a proof to lean upon; and for lack of that (since we all repudiate mediumship) she feels as though she would turn to the Xn church for support.[6]

In another letter, written to A. P. Sinnett, she described Irish Theosophist Miss Parker as "Miss Kislingbury's greatest friend, and went on to say:

And though Miss K. deserted us to become a Roman Catholic, still she is the best she theosophist London ever had.[7]

In the month of May, 1886, Miss Kislingbury visited Mme. Blavatsky at Wurzburg.

She was a member of HPB's Inner Group, formed in August, 1890 in London, and was faithful to HPB to the end. She attended the first convention of the European Section on July 9 and 10, 1891, and served as Treasurer.[8]

Miss Kislingbury wrote many articles for Theosophical journals, according to the Union Index of Theosophical Periodicals. There are 33 articles under the name Kislingbury, and those signed as EK may be hers as well.