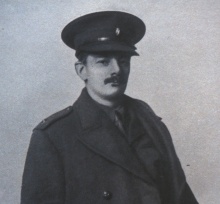 George Herbert Whyte is best known as the co-founder, with his wife Ethel, of the International Order of the Round Table in 1908.[1]

In 1895, Mr. Whyte worked as secretary to Charles W. Leadbeater. For a number of years he was Assistant Manager of the Theosophical Publishing House in London.

In June, 1917, The Theosophist reported:

Cheery news comes to us from Herbert Whyte, so well known among us from his admirable work, in concert with his wife, on the Young Age, and their preceding journal for children. His work on the Round Table - the earlier one than that of the political students - has carried his name round the world to all our National Societies. He volunteered for active service early in the War, and was first in France, then in the Balkans. In the latter place he one night pitched himself down a ravine on to his shoulder, and broke his arm. He was shipped off to Malta to be mended and writes: "I have had three months' holiday here - my longest for twenty-three years - and have fully enjoyed it. My tent is on the sea-shore, and except when the winds blow it is delightful. I have written a small book, given five lectures on Theosophy and one on Buddhism, and we have formed a centre..." But the wandering Theosophist may not find our friend there, as he is well enough to return to the front.[2]

Order of the Round Table

In 1908, Mr. Whyte established the International Order of the Round Table,[3] with his wife Ethel as co-founder. He was Senior Knight from 1907 until his death in 1917, when Charles Webster Leadbeater took his place.

Mr. Whyte joined a volunteer hospital unit in France, in 1914. He became a Second Lieutenant in the London Irish Rifles in 1916. While assigned to military duty in Malta, Lt. Whyte did research on the Knights of Malta of St. John. Lieutenant Whyte was awarded the Military Cross "for storming the almost impregnable fort of Jerusalem" on December 7-8, 1917. The honor was posthumous, as he was shot while defending Jerusalem on December 21st.[4]

The Union Index of Theosophical Periodicals listed 22 articles by or about George Herbert Whyte. Other writings include: