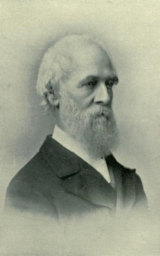 Dr. George Wyld (1821 - 1906) was a Scottish homeopathic physician, Spiritualist and Theosophist. He joined the Theosophical Society in 1879 and was the president of the British Theosophical Society in London from early 1880 until August, 1882, when he resigned from the Society. In 1883 and 1884, he wrote several skeptical articles about Mme. Blavatsky and the Masters of Wisdom in the London Spiritualist journal Light.

George Wyld was born at Bonnington Banks, near Edinburgh, on March 17, 1821. As a teenager he studied Greek, Latin, and science. When twenty years old he moved to London. In 1844 he joined the Phrenological Society and later studied medicine, eventually becoming an M.D. in 1851. He also became a Homeopathic physician, practicing this discipline for about 25 years. He published a book on the subject, generating a negative reaction from regular physicians. In 1876 he became the Acting President of the British Homeopathic Society, greatly contributing to the recognition of this branch of medicine. He was also interested in Spiritualism and Mesmerism.[1]

Dr. Wyld was present at the first meeting of the British Theosophical Society, held on June 27, 1878, at 38, Great Russell St., London.

Early in 1879 he met H. P. Blavatsky and H. S. Olcott, when they were in London on their way to India. The meeting took place at a dinner party at the Billings' home. He was not very impressed with Mme. Blavatsky, but "her undoubtedly mediumnistic powers, her striking personality, her cleverness and humor, and her evidently kindly instincts" caught his interest, and he joined the Theosophical Society.[2]

Early in 1880 he was elected President of the British Branch of the Society and was a member of the General Council of the Theosophical Society.[3] However, Blavatsky's methods of teaching and training, her lack of social refinement, her "irreverence" in relation to Christianity, and her denial of the existence of an anthropomorphic God, led him to resign from this position in August, 1882. He nevertheless stayed in the Society and on January 7, 1883, was elected Vice-President of the Branch along with Edward Maitland.

He eventually resigned from the Society but did not abandoned theosophy altogether. He blended the Theosophical teachings that appealed to him with his "intense belief in the life, teachings and work of Jesus Christ," and produced his Christo-Theosophy.[4]