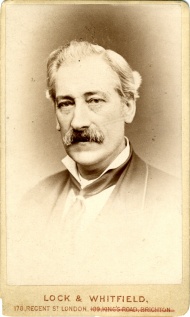 Edward Maitland (October 27, 1824 - October 2, 1897). English humanitarian, writer, and seer. He is best known for his collaboration with Dr. Anna Kingsford on their 1882 book, The Perfect Way, or the Finding of Christ.

Maitland was born at Ipswich, England, on October 27, 1824. His father, Charles David Maitland, a noted preacher, and Edward Maitland was brought up among strict evangelical ideas, and rigorous theories about original sin and atonement.

He was educated at Caius College, Cambridge, from which he graduated B.A. in 1847. Although his family expected him to take orders, he did not, due to doubts about faith and church. Maitland died on October 2, 1897.

On January 3, 1883, Maitland was admitted as a member of the Theosophical Society in London.[1]

In 1857 he took up an advanced humanitarian attitude and also claimed to have developed a new sense by which he was able to discern the spiritual condition of people.[2] He said had succeeded at. . .

. . . developing the intuitional faculty as to find the solution of all problems having their basis in man's spiritual nature, with a view to the formulation of a perfect system of thought and rule of life.[3]

In one of his letters, Mahatma K.H. recognizes the fact that Maitland was clairvoyant. However, because he had not been systematically trained, his visions were not accurate. The Mahatma comments on the fact that, although "Jesus and John the Baptist" as well as "Hermes the first and second and Elijah" were clearly visible and audible to Maitland, these visions were the creation of what he believed in and wanted to see.[4]

Other work with Anna Bonus Kingsford

The Union Index of Theosophical Periodicals lists 36 articles by or about Edward Maitland.