Herbert D. Monachesi (ca. 1849 - February 27, 1900) was a New York journalist and one of the Founders of the Theosophical Society. 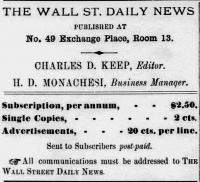 Facts about the life of H. D. Monachesi are elusive. He is not recorded in the United States Census, and only rarely elsewhere. His year of birth is variously given as 1849 or 1854. Military records indicate that he was from Philadelphia, and affirm the 1849 birth.[1]

In New York City, Monachesi worked initially as a clerk, but by 1872 had a position as an editor. The newspaper is no where named, but a New York City Directory lists him working at 32 Cedar, and that was the office of the New York Daily Bulletin.[2] In 1875 an election announcement for the New York Press Club lists H. D. Monachesi as a candidate for Librarian.[3]

In 1876 he edited a book with Albert B. Yohn entitled The Stationers' Handbook. A Practical Business Guide, with articles intended to help the book selling business.[4]

In 1879 he was Business Manager of the Wall Street Daily News. He was named as a co-defendant in a lawsuit against Charles D. Keep, who had founded the newspaper that year.[5] The legal action seems to have been a war of words between rival newspapers.[6][7]

At some point Monachesi gave up the newspaper business for a completely different life at sea: An 1882 report of his activities in a Theosophical journal states:

Mr. Herbert D. Monachesi, F.T.S., an officer of the United States' War-ship "Galena" wrote on June 20th from Alexandria, that he had been enjoying a cruise along both shores of the Mediterranean and down the west coast of Africa, as far as the Equator. The "Galena" was at Alexandria to look after American interests. "Many of these refuges" writes he -- referring to the foreigners who had fled from Alexandria -- "came on board of us for protection, among them, five American missionaries with their families. They have settled themselves to remain, it appears. They are a great nuisance and have turned our vessel from a well-ordered man-of-war into a Gospel-shop. They are the ‘American interests’ we have to protect!"[8]

In 1889, at the age of 40, he was a "ship's writer" or clerk on the sloop USS Kearsarge, a ship that had seen service in the American Civil War, and then briefly on the Jamestown. His work dealt with the many record-keeping tasks of the ship, such as drawing up the watch and station bill (ship's duty roster), various log books, and captain's correspondence. His naval "rate" or grade was "Lds." or "Landsman," a low rank.[9] Monachesi manifested symptoms of "epilepsia" with confusion, headache, and vision problems. His work "exhibited singular errors, exciting suspicion as to the integrity of his mind. He is believed to be an alcoholic subject, but with no direct evidence of such condition." Following a medical examination, he was transferred on May 14 to the naval hospital at Chelsea, Massachusetts for treatment and discharge from service.[10]

Monachesi died on February 27, 1900 in New York and was buried at the Fresh Pond Crematory and Columbarium.[11]

HERBERT D. MONACHESI: a newspaper reporter. An Italian by birth and of very psychical temperament. In The Sunday Mercury, New York, 1875, appeared an article by him on an intended Buddhist Mission to America, to make known Eastern spiritual knowledge. On the margin of this cutting Scrapbook I, H. P. B. wrote that his article outlined the original programme of The Theosophical Society, and that the time had come when the West should know more of the wisdom, philosophy and achievements of India. Monachesi dropped out.[12]

Monachesi took part in the ceremony at the cremation of Baron de Palm, along with William Quan Judge, Colonel Olcott, John Storer Cobb, Mr. Thomas, and "three or four others."[13] This was a major event in the early years of the Theosophical Society.[14] He was also present with Henry Steel Olcott and Charles Sotheran at the Gran Feste Internazionale to commemorate the life of Giuseppe Mazzini.[15]