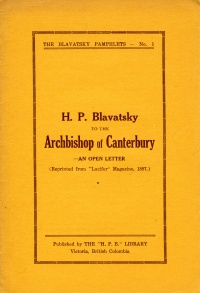 The H. P. B. Library is an independent entity that was established in 1917 by Alice L. Cleather. According to the website of the Canadian Theosophical Association:

The Library operates in accordance with the original ideals of the Theosophical Movement, which are to impress the truth of the universal brotherhood of all humanity and all life, and to exemplify its practice in daily living. Its aims are also to encourage the study of comparative religion, philosophy and science; and to attempt to awaken intuition to our own deeper nature.

In view of the above, the Library contains only reliable editions of H.P.B's work carefully copied from the originals, and later writings of Theosophical students which are based on the Mahatma's teachings. Various books of mystical interest on eastern philosophies, western occultism and metaphysical subjects in general are also included in the Library.[2]

Objects of the Library

In a catalog written sometime before 1975, but undated, the library stated three objects:

Its first and chief object is the formation of a nucleus of the original and unaltered writings of H. P. B....

A second object, closely linked with the first, is that of clearing H. P. B.'s name from all the libels and misrepresentations ...

The third object ... was that the next Messenger from the Masters of Wisdom, who is due in 1975, would find ready to his hand ... a "large and accessible literature."[3]

The H. P. B. Lending Library, therefore, contains only original editions of Madame Blavatsky's work; or, failing these, later editions carefully corrected from the originals, which will further serve the purpose of showing the extent and nature of the alterations made after her death.

Various books of general mystical interest are included in the Library.

The name chosen for this Library was dictated by the foregoing considerations; and, in view of these, no books are included which contain anything either distinctly undesirable from the Theosophical point of view or which are in conflict with H. P.B.'s own teachings and writings.."[4]

Around 1981, the Library published a series of Blavatsky Pamphlets, which are reprints of Blavatsky works and related topics. They are indexed in the Union Index of Theosophical Periodicals.