José Basilio Acuña was a leader in Central and South American sections of the Theosophical Society, Adyar. He was born February 7, 1897 and became a Fellow of the Theosophical Society in 1913. He attended Benares Hindu University, and completed a Bachelor of Laws degree.[1] According to another source, he studied psychology in France before World War I.[2] He was addressed as Dr. Acuña, or, in the context of the Liberal Catholic Church, as Rt. Rev. or Bishop Acuña.

Dr. Acuña received war decorations for his military service, and also was a Knight of the Légion d'Honneur.[3] Byron de Ford-Solano states that Acuña served in the Red Cross in France in 1917.[4]

In his teaching career, Dr. Acuña was a professor of psychology and logic in Lyceum, and of Latin in Normal School.[5] 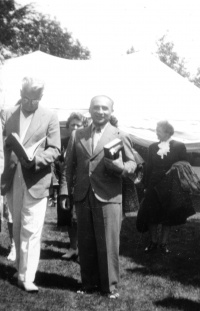 In 1927 Dr. Acuña served as Presidential Agent to Costa Rica, and was General Secretary pro tempore several times in that section. When Mr. C. Jinarajadasa was unable to lecture in Colombia in 1935, Dr. Acuña was asked to step in:

The Lodges in Colombia, not having been able to have the visit of Mr. Jinaranadasa, invited Bro. José B. Acuña, of "Virya" Lodge, (Costa Rica) to make a lecturing tour in that country, that he did spending in it from January to March. He visited the Lodges and helped very efficiently the Colombian Brethren, who, being so far away, lack many means which are necessary for a greater development. Besides he gave both public lectures, and talks for members and brought to the General Secretary's office very valuable information about the Theosophical work which will enable us to better understand their problems in the future.[6]

In 1935 he joined the Executive Council of the TS, representing Central America.[7] That year he also lectured in Panama City and Colon.[8]

Dr. Acuña began touring the United States around 1940, and continued during World War II, visiting local groups in Detroit, Sacramento, Portland, San Francisco, Oakland, Milwaukee, Wheaton, Minneapolis, St. Paul, and others. He spoke of "Looking Forward to a New World" "The Eternal Values of Life," "Democracy in the Evolutionary Scheme," and other topics at lodges and also at the 1942 and 1943 annual conventions.[9][10][11][12] The summer school held following the 1942 convention at the Olcott headquarters featured him as a major speaker on the evolution of man and of the human race, and also on super-human evolution.[13]

In 1953, after visiting Adyar, he stopped in the Philippines. "During his stay he gave several lectures on Theosophy not only at the headquarters of the Society, but in practically all the lodges in Manila. He was of considerable help and his visit was very much appreciated."[15]

He continued lecturing in the United States as recently as 1970, when he spoke to the Ojai Valley Lodge on "Is There Evolution?"[16] and taught at the Krotona School of Theosophy.[17]

Dr. Acuña was the founder of Freemasonry in Costa Rica.[20].

Byron de Ford-Solano states, "He wrote poetry, and a great number of essays in English, Spanish, and French. His translation of Shakespeare's Sonnets into Spanish is simply magnificent."[21]

Here is an example of Dr. Acuña's facility with the English language and his clear exposition of the concepts of Theosophy:

REGARDING the nature of man, Theosophy teaches that each is a Monad — that is to say, in some mysterious way, an individuality. The essence of that Monad is being, existence. It is endowed with certain powers, as represented in our Theosophical literature, that come from certain Hierarchies of Beings that stimulate that Monad and give it latent powers. Those powers may be developed in relation to its vehicles, so that we have instead of one body, as ordinary psychology would show, different kinds of bodies — physical, astral, mental, buddhic, and atmic (acting, feeling, thinking, loving and willing). The potentialities that are within the Monad are manifested through their contact with the vehicles. The external reality stimulates the vehicles and causes the Monad to react, producing the different states of consciousness right down from the highest level to the lowest, which we call waking consciousness. Consciousness is not, therefore, in a sense, an essence of being, or a quality of being. It is the RELATIONSHIP between that being of the Monad and its various vehicles, responding to that which comes from each vehicle and having awareness of each. Therefore we consider that in order to gain consciousness it is necessary to have on one side a spiritual unit and on the other side, a vehicle; the relationship of Monad to vehicle is equal to consciousness.

We must teach to the world of psychology this fact of the several layers of consciousness, for this is an important contribution Theosophy has to make.[22]