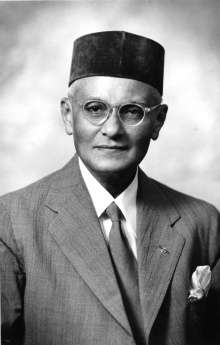 Curuppumullage Jinarājadāsa (16 December 1875 – 18 June 1953), was a Sri Lankan scholar, lecturer, and writer who served as the fourth President of the Theosophical Society based in Adyar, Chennai, India from 1945 to 1953. An accomplished linguist, he traveled extensively for fifty years as an international lecturer, speaking in English, French, Italian, Spanish, and Portuguese, as well as Sinhalese and Tamil. He was known to his wide circle of friends as "Raja", "Brother Raja", or "CJ". 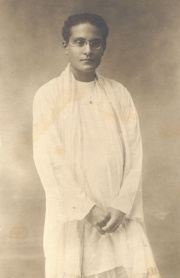 Mr. Jinarājadāsa was born on December 16, 1875 in Ceylon (now Sri Lanka) of Sinhalese Buddhist parents in a town about fifteen miles (24 km) south of the capital city, Colombo. He was in the Goygama caste.[1] The name Curuppumullage indicates a person "Curuppu" living in the house or town of Mullage. The surname Jinarājadāsa can be interpreted in various ways, but is a combination of three words: jina (winner), raja (king), and dāsa (servant).

His association with Theosophy began at the age of thirteen when, as one of the first students of Ananda College, he met C. W. Leadbeater. Brother Raja wrote of that year:

There was a certain day for me in November 1889, when I was thirteen when my feet were "washed in the blood of the heart." That day the Master received me as his chela.[2]

He wrote more of this event in his book Christ and Buddha.

The following year, A. P. Sinnett asked Mr. Leadbeater to return from India to England to tutor his son Denny and George Arundale, Leadbeater brought Raja with him. The three boys were close in age: Raja was born in 1875, Denny in 1877, and George in 1878. Jinarājadāsa met Madame Blavatsky for the first time. For two years, Raja and Leadbeater lived in the Sinnett household, but after that they moved into tiny quarters supported by Leadbeater's work giving English languages to foreigners. Raja attended classes to prepare for university.[3]

On March 14, 1893 he became a member of the Theosophical Society through the London Lodge, and 1894 was admitted into its Inner Group where he "was present at the intimate and informal gatherings of the Group which were held on most Sunday mornings in Mr. Sinnett's library for discussion."[4]

In 1896, Raja was admitted to St John’s College, Cambridge, and four years later took his Degree in the Oriental Languages Tripos. He also studied Law, and was coxswain of the College boat in the rowing team. He then went back to Ceylon where he became Vice-Principal (1900-1901) of Ananda College in Colombo. In 1902 he returned to Europe to study literature and science at the University of Pavia, Italy. In 1904 he went to America, where he began his career as an international lecturer of the Theosophical Society.[5]

In 1928, Mr. Jinarājadāsa spoke of some major intellectual influences on his life:

There are four great writers of the West who have influenced my thinking very profoundly. One is Richard Wagner. It was his ethical conception of life, linked to his marvellous creations, that made a profound impression on me. Another is Plato. As far as the West is concerned, ever since Plato wrote, wherever there is any kind of philosophical thought which deals with civilization or tries to understand the principles of art, every political writer and every exponent of art has more or less to follow Plato's trail... The third great writer is Dante, whom I consider the greatest poet humanity has yet produced... The supreme value of Dante is that he is utterly unique, so far as I know as always rising with his poetic art to the plane of the Buddhi. Whatever he says has a quality of intuition about it which is not characteristic of many other great poets...

The other writer is Ruskin. I well remember the great revolution which took place in my whole attitude toward life when I began to receive the volumes of Ruskin which Bishop Leadbeater sent to me in 1900. He had always been an admirer of Ruskin and he was brought up in the tradition of looking at Ruskin as someone very great indeed. When I received those volumes, there was that exhilaration which you yourself doubtless experienced when you came across Theosophy. It was a revelation... He emphasized the thought that the laws that should govern human life are not the ordinary laws of supply and demand as stated in the schools but that the primary factor in economic life is the human being, not as a producer but as a spiritual being who has an eternal destiny.... Ruskin refused to acknowledge that theology as such was separate from life, or that political economy was not as necessary to the salvation of the soul as any kind of prayers...[6] 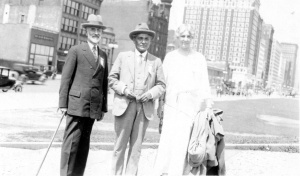 A. P. Warrington with Jinarâjadâsas

During the administration of Annie Besant, Brother Raja served as Vice President of the Society, from 1921 to 1928, during the presidency of Annie Besant. For a few years beginning in 1934, he was Head of The Manor, Mosman, Sydney, Australia.[7]

He was one of the founding members of the Order of the Brothers of Service, along with his wife Dorothy and Fritz Kunz. In 1934 he succeeded C. W. Leadbeater as Outer Head of the Esoteric Section. 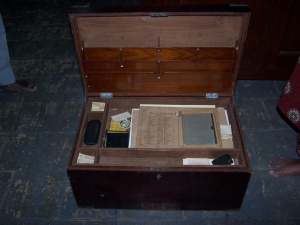 Because of his deep knowledge of Theosophy, his inspiring personality, and his proficiency in English, French, Italian, Spanish, and Portuguese, Raja was much in demand as a lecturer. The first speaking tour was in 1904 in the United States of America. He presented lectures at annual conventions of the international Society in 1914, 1917, 1921, and many times afterward.

In 1930, Brother Raja was asked to deliver the Blavatsky Lecture. His topic was "The Personality of H. P. Blavatsky".

This is a partial listing of his lecture tours: TO BE ADDED

During the years 1930-1932 and 1935, Mr. Jinarâjadâsa served as director of the Adyar Library and Research Centre. TO BE EXPANDED

He was highly engaged in organizing the archives of the Society, and in publishing materials found there. TO BE EXPANDED

Following the death of George Arundale,Mr. Jinarâjadâsa ran unopposed for election to the presidency. He took office as President of the Society on February 17, 1946 and served until 1953, when he resigned due to illness. His successor was N. Sri Ram.

In 1949 Jinarâjadâsa founded the School of the Wisdom at Adyar, for the study of Theosophical teachings in depth as given in the textbooks, but primarily because a student knowing these things could with widened vision ‘sit in the centre’ of his own being and ‘enjoy clear day’ in his understanding of the world of men and affairs. The School was also to devote its studies to the thoughts of the great and the affairs of men in the larger sense through historical time. Its yearly sessions attract students from several countries to this day. He tried to make the Headquarters once more a centre for students and gradually reorganized the estate for that purpose. Jinarâjadâsa could always present his thoughts with clear and delicate appreciation of the pictures his words would create in the minds of his readers.[8]

Brother Raja was fond of the American sport of baseball:

Base Ball originated in America. It was introduced into India by Mr. Jinarajadasa, who took with him on his return from this country [United States] a supply of bats, balls, gloves and rule books, and as always his work has taken root. We have a letter from Mr. Felix Layton, the Head Master of the Besant Theosophical School at Adyar, stating that that team has won the Madras Schools' Base Ball Championship. In other respects, also, the school is doing well.[10] 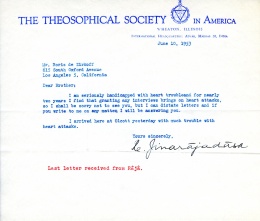 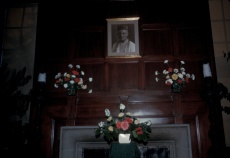 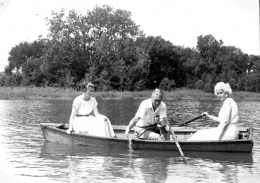 The strains of his travels took a toll on his health. In a 1946 letter to James Perkins he wryly commented on the hot climate of Adyar, India:

If only Adyar would cool off 20° between day and night we would manage quite well. As to my stay in Bangalore, the one who worked hardest was Elithe [Nisewanger, his secretary], because I gave several lectures and talks and she took them all down. The skin irritation stopped with 10° cooler than Adyar, but by compensation to equalize karmic debits, knees and particularly my left shoulder (I am left handed) got going. However, all these ups and downs are part of the order of the day.[11]

On February 17, 1953, suffering from diabetes and heart disease, Mr. Jinarājadāsa resigned from the presidency of the Society after one term in office. He was the only President who declined to stand for re-election, and in February of that year Nilakanta Sri Ram became his successor.

CJ had committed to a lecture tour of the United States. When he reached the headquarters of the American Section, he became ill. On June 10th he wrote a final letter to his longtime friend Boris de Zirkoff describing his heart attacks. Despite the earnest efforts of Dr. Henry A. Smith, other doctors, and the staff to help him, Mr. Jinarājadāsa passed away on June 18, 1953. A memorial service was held in the library, and his ashes were scattered on the Fox River by James S. Perkins, Kathrine Perkins, Helen Zahara, Caroline Tess, and Geoffrey Hodson, according to Brother Raja's specific instructions. A very detailed account of his final days was written by Mr. Perkins.[12] A memorial plaque was installed in the Garden of Remembrance at Adyar.

He loved children, the sea,
Beethoven, Wagner’s Ring, the
Hallelujah Chorus, and his
Gospel was Ruskin.[13]

C. Jinarājadāsa was one of the foremost Theosophical writers. A list of his works is in a separate article, Jinarājadāsa writings.

In 1913 he was awarded the Subba Row Medal for his extensive contributions to Theosophical literature.

Articles are indexed in the Union Index of Theosophical Periodicals. Over 1600 articles are listed under the name Jinarājadāsa. Searching under CJ will result in a lengthy list that includes work by Charles Johnston, a Sanskrit scholar who was married to Madame Blavatsky's niece, and who was also known by the same initials. Within the results list, the articles by Mr. Jinarājadāsa will include those in the periodicals: The Adyar Bulletin, The American Theosophist, The Australian ES Bulletin, The Herald of the Star, The Messenger, Sishya (The Student)], The Theosophic Messenger, The Theosophist, and World Theosophy. Articles by Charles Johnston appear in Theosophical Quarterly, Theosophy, The Path, and The Irish Theosophist.

In 1913, Mr. Jinarājadāsa was awarded the Subba Row Medal for his contribution to Theosophical literature. A grove was planted at the Olcott campus with a plaque and stone bench. A Raja Commemorative Fund was established to support travel expenses of lecturers.