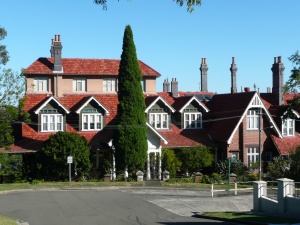 The Manor is a mansion at 2-10 Illuka Road, Mosman, NSW, Australia that served as home to a Theosophical community beginning in 1922. Located in a suburb just north of Sydney, it is listed on the registry of heritage places in New South Wales.[1]

The house was originally built in 1904 for William John Bakewell, a brick and tile manufacturer. He did not live in the mansion long; by 1922 it had been empty for several years.

Karel van Gelder, father of Dora van Gelder Kunz, was a Dutch planter and Theosophist who had moved to Sydney from Java. believed that the future of humanity lay in establishing equitable, self-sustaining communities. While living in Sydney, he heard of an empty 55-room mansion locally known as "Bakewell's Folly" that was situated in Mosman overlooking Sydney Harbour. He toured the property, and quickly brought Charles Webster Leadbeater to see it. The matter was discussed with local Theosophical families:

The end was that the different families met in council and that Bishop Leadbeater invited Mr. van Gelder to assume the most difficult task of managing the community. He accepted, the rooms in the house were divided amongst the families, the lease signed for three years with two years' optional extension, and on August 3rd, while a howling southerly was shaking the house, the first group of new inhabitants came in, consisting of Walter hassel, Hely Labberton, Lucius van Gelder and myself [Koos van der Leeuw].

During the next week Bishop Leadbeater, with the Köllerström family, the van Gelder, Mazel and Vreede families and "those without family" arrived. They were chaotic days those first two weeks of the Manor. Mr. van Gelder certainly had a great task to perform, and, with the help of the whole household, he accomplished it successfully; the community never experience any serious trouble. This certainly proves the splendid spirit in which all undertook the work and the willingness of all who hitherto had run their own households to fit in with whatever was necessary.[2]

According to a biography of Dora Kunz,

A cook and a few other employees were hired, and students were given work-study scholarships to manage the cleaning. Dora, her parents [Karel and Melanie van Gelder], and her grandmother each had a room, and Dora's three brothers shared a large top floor room with the boys and children from other families. There were also classrooms, a meditation hall, and an LCC [Liberal Catholic Church] chapel in the basement where services were held each morning...

The residents ate meals together (though according to Dora, Leadbeater often preferred to have his meals in quiet in his room). Residents volunteered regularly for certain chores in the building or on the grounds.[3]

Dora van Gelder conducted meditation classes for the young people. Clara Codd joined the community for a while, and Fritz Kunz. By April 1923 the Manor had nearly thirty residents.

Karel van Gelder purchased radio equipment, and set up an amateur station which served as the basis for 2GB, a commercial broadcasting station operated by the Theosophical Society in Australia.

The NSW registry of heritage places provides this description of the architecture:

Federation Queen Anne/Arts-&-Crafts. This is a large and imposing dark-brick residence, located on a broad site addressing Iluka Road at the bottom of the slope of Morella Road. Essentially linear in design, it has dominant gabled roof elements parallel to the street, and secondary gables projecting forwards with single-storey verandahs between them. One of these gables protects the columned entrance. The first floor rooms are generally in the roof space and are marked by a series of prominent street-facing gabled dormers. Part of the building has a third storey with rendered walls and a hipped roof. Its form suggests that this could have in earlier times been a narrow rectangular belvedere, but the fabric evidence of this is unclear without closer examination. The house roofs are terracotta tiles with shingled gable areas and some gable screens. Windows are generally triple-light ensembles with top sashes divided into small panes. Chimneys are tall and corbelled, with terracotta pots.[4]

Many of the rooms were lined in beaten copper.

The Manor remains a center of the Esoteric Section, its Heads having included C. Jinarajadasa, Dr. Van den Broeck, James S. Perkins, and Jack Patterson. There is still a chapel in the basement, and the Egyptian Rite still meets there regularly.[5] Since 1950, the building has been owned by The Manor Foundation Ltd. The Australia registry of charitable organizations give this "Summary of Activities":

Our activities provide a spiritual and educational centre, and its work is to spread teachings of Theosophy so that the inspiration of the Ancient Wisdom of all cultures may be shared throughout Australia and the world. It maintains close links with other T.S. centres and theosophists in other countries, providing a peaceful haven for retreats and for those aspiring to the spiritual life. [6]