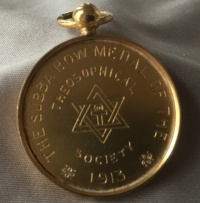 Curuppumullage Jinarājadāsa (16 December 1875 – 18 June 1953) was one of the foremost Theosophical writers. In 1913 he was awarded the Subba Row Medal for his contributions to Theosophical literature. His works have been translated into numerous languages, including Spanish, Italian, Dutch, German, Greek, Finnish, Hungarian, Russian, Japanese, Tamil, Telugu, Javanese, and Gujarati.

Mr. Jinarājadāsa was an extremely prolific contributor to Theosophical periodicals. Many of the articles are indexed in the Union Index of Theosophical Periodicals. Over 1600 articles are listed under the name Jinarājadāsa. Searching under CJ will result in a lengthy list that includes work by Charles Johnston, a Sanskrit scholar who was married to Madame Blavatsky's niece, and who was also known by the same initials. Within the results list, the articles by Mr. Jinarājadāsa will include those in the periodicals: The Adyar Bulletin, The American Theosophist, The Australian ES Bulletin, The Herald of the Star, The Messenger, Sishya (The Student), The Theosophic Messenger, The Theosophist, and World Theosophy. Articles by Charles Johnston appear in Theosophical Quarterly, Theosophy, The Path, and The Irish Theosophist.

Dozens of books and pamphlets also flowed from the pen of Mr. Jinarājadāsa. These are some of his titles, arranged by topic. Unless otherwise stated, the publisher was Theosophical Publishing House in Adyar, Madras [now Chennai], India.

Mr. Jinarājadāsa served as editor of these works:

Chapters, essays, and introductions in other books

During the course of his life, Mr. Jinarājadāsa delivered hundreds of lectures. Some have been transcribed and printed in pamphlets and booklets. Unless otherwise stated, the publisher was Theosophical Publishing House in Adyar, Madras [now Chennai], India.