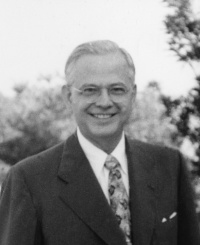 Henry Arthur Smith was a dermatologist and Theosophist who served as the President of the Theosophical Society in America from 1960-1965.

On November 21,1898, Dr. Smith was born under the name Heinrich Schmidt in a community of Swiss-Russian Mennonite immigrants near Freeman, South Dakota.[1] He and his childhood friend, artist Henry Schwartz, moved to the Chicago area. Smith was educated at Joliet Jr. College, Chicago Collegiate Institute, Lewis Institute, (later Illinois Institute of Technology), and the University of Chicago, where he belonged to an honorary freshmen fraternity called the "Three-Quarters Club." He was also a member of the Psi Upsilon fraternity.[2] He received his M.D. degree at the Chicago Medical School in 1932.[3]

Dr. Smith practiced medicine in Chicago. He was on the faculty of the Chicago Medical School as an assistant professor of dermatology, and also served as chairman of its Board of Trustees. He was a member of the American Medical Association and several state and city medical organizations. For many years he chaired the Department of Dermatology at the Illinois-Masonic Hospital.[4]

Dr. Smith became active in the Liberal Catholic Church, and Gene also became a member in 1926. The Smiths were instrumental in purchase of the church building for the Church of St. Francis in Chicago. On May 11, 1937, at the age of 40, Dr. Smith received all minor orders and the sub deaconate from Bishop Edmund Sheehan. Just six months later, on November 24, 1937, he was raised to the deaconate. He was ordained to the priesthood by Bishop Hampton on November 12, 1939. Gene was the church Treasurer from 1935 to 1960 and led the Round Table, an organization for children. Their son Lawrence became a priest in 1959, and a bishop in 1982 Rev. Dr. Henry Smith’s last official service as rector of St. Francis was on June 26, 1960, just before he took on the Presidency of the Theosophical Society.[5] 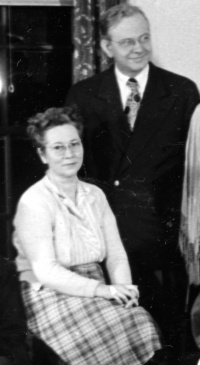 Gene and Henry Smith in April 1948 at Olcott.

In 1924 the Smiths and Schwartzes helped to found the Oak Park Lodge, where they were all active for many years. Dr. Smith served as lodge president from 1924-1930 and 1932-1936.[6] It was a very energetic group, with many classes, social activities and public lectures. He was also active with the Chicago District Federation, the Theosophical society in Chicago, and the Akbar Lodge of Chicago.[7]

By the time he ran for President in 1960, Dr. Smith was 63 and had been a member of the TSA for over 40 years. He had been active as a leader and lecturer, travelling widely across the United States to address Theosophical audiences. In 1951 he was elected to serve on the national Board of Directors, and three years later he became Vice President in the Perkins administration. National lecturer E. Norman Pearson was nominated for the presidency, but Smith won with a strong endorsement from his predecessor. After being elected President, Dr. Smith mostly retired from his medical practice to devote more energy to the Society. Joy Mills was elected as Vice President in his administration, and Board members were J. Robert Branning of Savannah, Georgia, superintendent of the Bethesda Home for Boys; Irene S. Durham of Seattle, Washington, retired from being Chief of the Crime Prevention Division of the Seattle Police Department; Emil H. Heintz of Altadena, California, a manager in Magnus Chemical Company; Dora van Gelder Kunz of New York City; and Samuel H. Wylie of Ann Arbor, Michigan.[8] 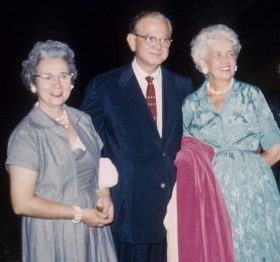 Gene and Henry Smith with Kathrine Perkins, 1960 at Olcott.

Term as President of Theosophical Society in America

In July 1960 Dr. Smith was installed in his new office. At this point he was semi-retired from his medical practice. His health was never robust, and he was frequently ill; nonetheless he accomplished a great deal in his few years as President.[9] His administration undertook the major project of expanding the national library, using funds from a bequest. Architectural design was completed by Milwaukee Theosophists Lillian and Wilbur Leenhouts. Groundbreaking took place in May 1962, and Portland member George Linton supervised construction. The project involved “excavating under the existing library to provide additional space for the stock of the Theosophical Press, extending the library to the south for much-needed shelf-space for the growing collection of books, and adding a second floor to provide three conference rooms for reference books.”[10]


Another innovation of the Smith era was establishment of the Membership Endowment Plan. "Members desiring to endow their membership for life would pay $300, either as a lump sum or installments. This money would be placed with the [Theosophical] Investment Trust as a permanent endowment fund, the interest from which would take care of dues for the member’s lifetime and continue as a source of income after the member’s death."[11]

Dr. Smith toured the Section, lecturing and determining the needs of members, and this led to other accomplishments:

Mrs. Smith served in many capacities for the Theosophical Society. While living at the Olcott campus, she managed the kitchen, supervising the feeding of a staff of 30, plus visitors.

Problems arose in Dr. Smith’s personal life, with the President being absent from headquarters for long periods of time. The Board stepped in to manage Society affairs, and relations became tense. The National Judiciary Committee and Board offered Dr. Smith three alternatives, and he ultimately chose to take a leave of absence for the remainder of his term in office. Joy Mills stepped in as acting President.[15]

Henry and Gene divorced, and he married Mrs. Joanna Guthrie of the Akron, Ohio Lodge on May 12, 1964. The wedding took place at his house on the Olcott campus.[16]

Gene Smith moved to Ojai, California that year to live at the Krotona Institute of Theosophy. She became a member of the board for the Institute, and for some years was also president of the Theosophical Book Association for the Blind. She remained active in the Liberal Catholic Church, managing the St. Alban Press; volunteering at Our Lady and All Angels Church in Ojai; and serving on the Boards of Rogers-Cooper Memorial Foundation and the LCC in the Province of the USA.[17]

Dr. Smith was married to Joanna Guthrie until 1971.[18] He continued to live in Wheaton, but was in poor health.[19] He reconciled with his former coworkers at the TSA headquarters, and later moved to Ojai, joining Gene in remarriage on March 5, 1972.[20] He passed away on September 10, 1979. When Gene died at the age of 97 on May 29, 2000, she was survived by a son, two granddaughters, one great-grandson; and two great-great-grandchildren.

Dr. Henry A. Smith was for years one of the finest figures in the T. S. in America, a man of great courage, and of intense devotion to Theosophy and of unfailing kindness to anyone and sundry. Opposed by some, accused by others, he worked for good will among all Theosophists, irrespective of their affiliation or of none. He looked ahead to a unified Movement...

If Henry Smith made any mistakes, he is in the company of all of us... Henry Smith may well be remembered for his forthright actions, his quiet demeanor and his spirit of universality...[21]

Dara Eklund, compiler of Echoes of the Orient, the complete works of William Quan Judge, dedicated the second volume of her work: "To Dr. Henry A. Smith who passed away as this work embodying the teachings of one of his favorite Theosophists, was being set up."

Henry Smith did not write any books, but the Union Index of Theosophical Periodicals lists 34 articles by or about him.