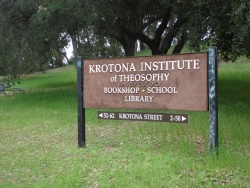 The Krotona Institute of Theosophy is the headquarters of the Esoteric School of Theosophy (E.S. or EST) for the United States and Canada. It is a residential spiritual community with a school, library, and bookshop intended to serve members of the Esoteric School and the Theosophical Society, as well as the general public. The name Krotona was derived from the Crotona school of Pythagoras.

President A. P. Warrington of the American Theosophical Society (now Theosophical Society in America) and his associates founded a spiritual center in Hollywood, California in 1912. He moved Society headquarters from Chicago. Buildings sprang up on the Hollywood Hills, to the great interest of local newspapers[1], who often referred to it as the Krotona Colony:

As the film industry grew and Hollywood boomed, the Krotona Institute moved to a quieter location in the Ojai Valley in 1924. The Society's headquarters moved to a more central location in Chicago in 1920, under the guidance of new President L. W. Rogers.

See Krotona in Hollywood for more information about the earlier days of the Krotona Institute.

Krotona has been described in this way by its former Vice President, Hein van Beusekom:

Krotona is the home of the central office of the Esoteric School of Theosophy in North America. The EST is an organization intended for those who are willing to make a special effort to live the theosophical life, which is a spiritual life having altruism as its keynote, and who are willing to accept certain ethical disciplines. The EST is open for those who have been a members of the Theosophical Society for at least two consecutive years, and who have demonstrated their willingness to work for Theosophy.

We reach out to the world through the Krotona School of Theosophy, Library and Quest Bookshop. The School offers an in-depth approach to the study of theosophical subjects, exploring the spiritual dimension as well as the intellectual. It is also a training center for members to prepare themselves to participate more fully in the Society 's work. Members are always welcome to come here for personal retreat or study.[2]