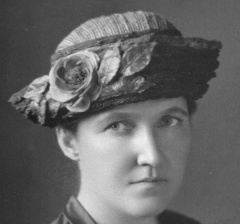 Miss Sommer was born in Heidelberg, Germany on December 15, 1873.[1][2] Her family immigrated to the United States in 1881.[3] She received a Bachelor of Science degree from the University of Chicago, and a Master of Arts degree from Columbia College [probably Columbia University in New York rather than Columbia College in Chicago].[4] She taught public school in Chicago, living in 1910 with her younger sister Catherine, who kept house, and her brother William [born Wilhelm], a draftsman.[5] She became a naturalized citizen of the United States on October 24, 1896 in Chicago.[6] Miss Sommer joined the Theosophical Society on December 12, 1904 in Chicago. By 1910 she was being praised by the Chicago Central Lodge for "a number of interesting and wonderfully helpful lectures on 'Ancient Wisdom.'"[7] From 1912 to 1919, she chaired the Chicago Theosophical Association, which was a federation of lodges.[8] By 1915 she had been elected as Recording Secretary of the American Theosophical Society under President A. P. Warrington. After a period of teaching in California, she returned to Chicago where she led a Saturday class in astrology following the scheduled public lectures.[9]

Her brother William was also a member of the society in Chicago in 1909, and intermittently until 1939.[10] 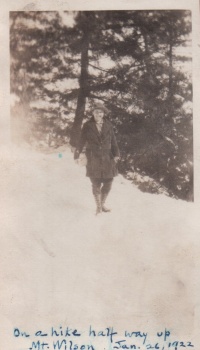 In 1920 Miss Sommer moved to Hollywood, California, where she served as principal of the School of the Open Gate from 1920-1925. The school was operated by the Krotona Institute of Theosophy.

She served as president of the Theosophical Fraternity in Education for America.[11] In her capacity as Chairman of the Theosophical World-University Association in America, she edited Child Training: In the Light of Theosophy, which was compiled by Professor R. K. Kulkarni of the League of Parents and Teachers. In 1937, "The Ideals and Work of the World University Movement" was suggested as a topic in a Lodge Study Course, with Miss Sommer providing the curricular materials.

Miss Sommers was also known for her study of astrology. A review of her book When Were You Born? states:

This significant contribution to astrology carries the hallmark of the true teacher and will be earerly welcomed by the many students who have heretofore found themselves mentally lost among the intricate working details of the prenatal epoch correction of a horoscope.

The object of this ancient Hindu method is to determine the moment of etheric birth, whence can be deduced the exact birth hour of the denser physical body, without which as a basis no horoscope is reliable.

The author, who is widely known for her valuable research work in the field of astrology has hit upon a mnemonic device which greatly simplifies the epoch method, thus making it available to any student who is capable of setting up a chart.[12]

Around 1930 she moved to the Krotona Institute of Theosophy in Ojai, California.[13] She died on February 16, 1945 at a hospital in Los Angeles.[14] A service was conducted by Bishop Charles Hampton of the Liberal Catholic Church in Los Angeles, and was attended by Marie Poutz, Joy Mills, and other friends from the Krotona Institute of Theosophy. Books were donated, in lieu of flowers, to the Krotona Library and the Henry S. Olcott Memorial Library.[15] She never married.

Miss Sommer frequently wrote articles and book reviews. The Union Index of Theosophical Periodicals lists 36 articles by or about Julia K. Sommer. In addition, she wrote several books and pamphlets:

Correspondence dated 1925-1935 from her work at the Theosophical World-University is in the Mary Anita Ewer Papers at the Cornell University Archives.[1]