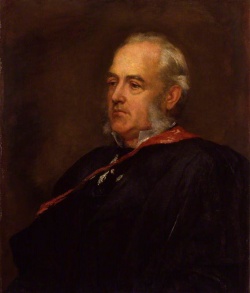 Friedrich Maximilian Müller (December 6, 1823 – October 28, 1900), generally known as Max Müller, was a German-born philologist and Orientalist, who lived and studied in Britain for most of his life. He was one of the founders of the western academic field of Indian studies and the discipline of comparative religion. Müller wrote both scholarly and popular works on the subject of Indology. The Sacred Books of the East, a 50-volume set of English translations, was prepared under his direction. He also promoted the idea of a Turanian family of languages and Turanian people.

He was defeated in the 1860 election for the Boden Chair of Sanskrit by Prof. Monier Williams. Müller was far better qualified for the post, but lacked practical first-hand knowledge of India. Also, both candidates had to emphasize their support for Christian evangelism in India, since that was the basis on which the Professorship had been funded by its founder. Müller's broad theological views cast doubts about his dedication to Christianization.

According to Mahatma Koot Hoomi, Müller "was not sufficiently conversant with Indian thought to interpret properly some of the books he translated."[1] Many modern Hindus take a harsher interpretation. This example is from the Encyclopedia of Authentic Hinduism: "Max Müller was a British agent, especially employed (in 1847) to write the translations of the Vedas in such a demeaning way so that the Hindus should lose faith in them."[2] India Today recently published an article called "Max Muller: The Man Employed to Create a Distorted Translation of the Vedas."[3]