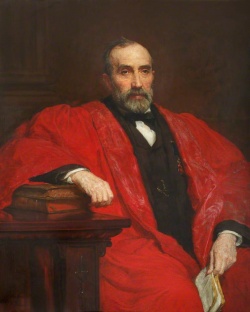 Sir Monier Monier-Williams, KCIE (November 12, 1819 – April 11, 1899) was born in Bombay, the third of the four sons of Colonel Monier Williams, R.E., surveyor-general of the Bombay Presidency. He was the second Boden Professor of Sanskrit at Oxford University, England. He studied, documented and taught Asian languages, especially Sanskrit, Persian and Hindustani.

Prof. Monier Williams was elected for the Boden Chair of Sanskrit during the 1860 election campaign, in which he stood against Max Müller. Both candidates had to emphasise their support for Christian evangelisation in India, since that was the basis on which the Professorship had been funded by its founder. Monier Williams' dedication to Christianisation was not doubted, unlike Müller's. After his appointment to the professorship Williams declared from the outset that the conversion of India to the Christian religion should be one of the aims of orientalist scholarship. In his book Hinduism, published by SPCK in 1877, he predicted the demise of the Hindu religion and called for Christian evangelism to ward off the spread of Islam. According to Saurabh Dube this work is "widely credited to have introduced the term Hinduism into general English usage." Monier Williams compiled a Sanskrit-English dictionary based on the earlier Petersburg Sanskrit Dictionary which was published in 1872.

Monier-Williams, Sir, 1819-99. A famous English Sanskrit scholar. He became professor of Sanskrit at Oxford in 1860 and continued in that office until 1899. He traveled extensively in India in connection with his translations of Indian writings. ML, p. 238.[1]