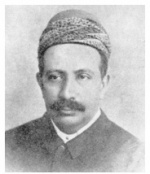 Khān Bahādur Navroji Dorabji Khandalavala was a Parsi Judge and highly respected Indian theosophist. His application for membership in the Theosophical Society was accepted on November 25, 1879, and he was officially admitted on January 4, 1880, at a special meeting in Bombay.[1] He became President of the Poona Theosophical Society, and was a valuable supporter of the Founders.

Khandalawala, N. D., a provincial judge, member of the TS from its early days in India. A loyal supporter of HSO and HPB in the Coulomb affair which developed in 1884. ML, p. 187.[2]

Madame Blavatsky conducted a correspondence with him, through which she disclosed important information about the Mahatmas and other matters.

In a letter of July 1888, she confirmed that the Master Hillarion aided Mabel Collins in the writing of Light on the Path:

...she saw before her, time after time, the astral figure of a dark man (a Greek who belongs to the Brotherhood of our Masters), who urged her to write under his diction. It was Hillarion, whom Olcott knows well. The results were Light on the Path and others.[3]

Countess Wachtmeister met Master Morya in Europe before she ever knew of the Theosophical Society. H. P. B. disclosed that fact in a letter to Mr. Khandalavala, dated July 12, 1888:

Constance Wachtmeister joined the T.S. because she recognised in the portrait of my Master her living Master who saved her on several occasions, whom she saw in his physical body years ago when he was in England, whom she saw in his astral body a number of times, and who wrote to her from the first in the same handwriting he uses for our Society. When she assured herself of this, she joined the T.S. at his advice; and now for three years and more she lives with and takes care of me."[4]

In another letter, Mme. Blavatsky told him that a letter from Sriman Swamy to Lucifer contained two "fibs": (a) "Damodar never was at Lhassa nor Sriman Swamy either, and not being permitted to say where he saw Damodar he gave a wrong name"; and (b) "My Master never told him what he says of me, but he heard it from a chela".[5]