Zoroastrianism is one of the world's oldest religions that is still practiced today, and the oldest surviving monotheistic religion. It takes its name from the Iranian-speaking Prophet called by the Greeks Zoroaster (Ζωροάστηρ). His name in Avestan is Zarathushtra (or Zarthost in Modern Persian) meaning "Golden Shining Star." Another name for this religion is Mazdayasna, which combines "Mazda" (God's wisdom) with the word "yasna" (worship, devotion). Many scholars think that this is the original source of religious conceptions of heaven, hell, Satan, and Judgment Day, present in Judaism, Christianity and Islam. 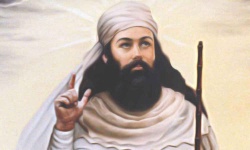 The founder of Zoroastrianism is a mysterious prophetic figure known as Zarthushtra, born to father Paurushasp and mother Doghdo, who were highly commendable pure souls. He is regarded as a wise and pure human being, not as a manifestation of God. Scholars have struggled to determine the century in which he may have lived. The closest to a scholarly consensus is sometime in the late second millennium (2,000 to 1,000) BCE, somewhere in Central Asia (near modern-day Uzbekistan and Tajikistan). It is said that at his birth he had a smile on his face and that his aura spread light all over the town. His opponents somehow came to know that their nemesis is approaching and so they tried to kill the child several times. However, his life was saved through divine intervention. Zarathushtra grew up as a youth given to deep meditation and spent ten years in mountain retreat learning to solve many problems of life that baffled men.

Zoroastrianism was the first ancient Monotheistic religion. Zarathushtra broke with the existing polytheistic religions of Central Asia and established the single divine authority of Ahura Mazda, or the "Wise Lord" (Avestan: Ahura = "Lord" and Mazda = "Wisdom"). Ahura Mazda is described as a universal, transcendent, unknowable, and all-good creator. He is considered to be omniscient but not omnipotent. He has three Aspects, which are "Ahu," the Creator; "Vohu Mana" or Good mind, the Preserver; and Asha Vahishta, the Reconstructor. He is assisted by six emanations called Amesha-spentas, the Holy Immortals (archangels) representing His attributes to rule over kingdoms of nature and animals. These Ameshaspentas were helped by 33 "angels" known as Yazatas (meaning "worthy of worship") in their work.

Ahura Mazda unfolds the twin forces of nature namely, "Spenta Mainyu" (the Benevolent Spirit) and "Angra Mainyu" (the Destructive Spirit, embodied in "Ahriman"--the equivalent of Satan in the Judeo-Christian tradition). The main spiritual force coming from Ahura Mazda is "Asha," the cosmic order, which is the antithesis of "Druj" or chaos, falsehood and disorder, coming from Angra Mainyu. 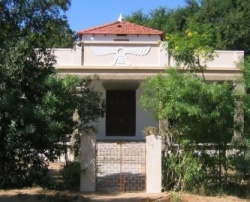 Zoroastrians don't have regularly scheduled times for worship services. However, they do have temples in which Zoroastrian priests or "magi" conduct ritual prayers in the ancient Avestan language during special days of the year. Otherwise, members pray individually. Fire is the most sacred element to Zoroastrians and figures prominently in temple rituals like the Yasna. An eternal flame is kept alight in Zoroastrian temples 24 hours a day.

The Sun is specially mentioned the most beautiful body of God which gives light on earth. Fire ("Atash," the most adorable son of Ahura Mazda) became the emblem of the most Bountiful Creator, reminding devotees of God's glory that is light, heat, energy, vitality and virility. The Mazdayasni people founded temples and tended the fire there. These temples are known as Fire Temples or Atash Behram. Every Zoroastrian bows to the sacred fire which burns in the Fire Temples or in his house.

The consecrated fires in the Fire Temples not only give out light and heat from the altar, but within the shrine is the aura (Khureh), of the Almighty, kept glowing through the presence of invisible Guardian Angel. This occult presence is thought to bless those who offer their devotion.

Zoroastrianims was an early (some claim the first) religion emphasizing ecology, believing in preserving and respecting all creations of nature, being careful not to exploit it as this would seriously disturb ecological balance to the detriment of mankind. It preaches that Ashoi (Purity) must be observed--not only of body and mind, but also of environment and all elements of nature, like fire, water, air, earth, space, plant life and animal life. 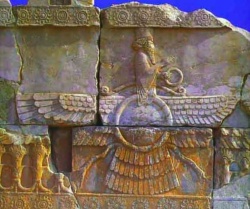 For this reason, Zoroastrians traditionally buried their dead in special towers (later called "Towers of Silence") where the corpses would be left to be eaten by birds of prey, thus not polluting the air, earth, fire or water. The bones would be bleached by the sun and then placed in a pit. Currently this is only practiced in India, as in most parts of the world this would be illegal or considered inappropriate. Modern Zoroastrians may bury their dead in graves protected by concrete or stone.

The most visible symbol of Zoroastrianism is the Farohar or Faravahar, what looks like a large winged eagle with the body and head of a bearded man. This image is famously carved into the ruins at Persepolis, the ancient capital of the Zoroastrian Achaemenid Empire in Iran, and now graces Zoroastrian temples and gravesites.

Traditionally, Zoroastrians have not converted people to their faith. However, recently, they have begun to accept those who choose to become Zoroastrians through their own choice.

To Zoroastrians, all of reality is shaped by the dueling forces of light and dark, and every human being is free to choose their own path. The purpose of life, then, is to actively choose the good in thought, word and deed. Ahura Mazda revealed to Zoroaster the divine message of purity, uprightness and truth. His theology includes foremost the importance of following the Threefold Path of Asha: Humata Hukhat Huvarashta, i.e., "Good Thoughts, Good Words and Good Deeds." Since humans are endowed with a thinking mind, they must choose freely whether to follow the right path or not. There is also a heavy emphasis on spreading happiness, mostly through charity, and respecting the spiritual equality and duty of the genders.

Zoroastrianism emphasizes action over belief, since it is the actions that one takes in life that determine our fate in the afterlife.