The Temple of the People is an international Theosophical group based in Halcyon, California, with a quarterly publication called The Temple Artisan. The American headquarters has the web site www.templeofthepeople.org, and an affiliated group in London has a web page www.creedsdisappear.org.uk, named after the organizational slogan "Creeds Disappear, Hearts Remain". 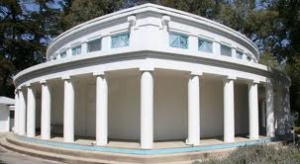 The Temple of the People was founded in Syracuse, New York, in 1898 by Francia A. La Due and Dr. William H. Dower, arising from the Universal Brotherhood and Theosophical Society.[1] In 1903, the group moved to land near Oceano, California, and incorporated as as “Guardian-in-Chief of The Temple of the People, A Corporation Sole.”[2] Dr. Dower established the Halcyon Hotel and Sanatorium to treat drug addiction, alcoholism, nervous disorders, and tuberculosis. A community grew up around the sanatorium with some Temple members engaged in farming, poultry, and handicrafts.[3] In 1904, the Temple Home Association was founded.[4]

Land continued to be acquired by the Temple, whose holdings were at one time much more extensive than present-day Halcyon. A town plan was laid out by the Temple Home Association, which subdivided a portion and sold or leased out home sites. A print shop was established to produce a monthly magazine (which is still published), the Artisan, as well as other Theosophical literature. A general store and post office opened in 1908.[5]

The unique and beautiful Blue Star Memorial Temple was erected in 1923 and consecrated to the highest ideals of service to and for humanity. The name "Blue Star" honors the first Guardian-in-Chief of the Temple, Francia A. LaDue, who was called by that name. Dr. Dower was known as "Red Star".

The Halycon Hotel and Sanatorium remained open until 1949.[6]

The William Quan Judge Library was established during the tenure of the third Guardian, Pearl F. Dower.

Individuals and families moved to the vicinity of the Temple group and established the Halcyon community that in still there:

Although an intentional community, Halcyon was never a commune. Members have always supported themselves in family groups. Land was purchased by the Ternple Home Association and leased to members. Some raised food crops, some went into poultry production, others tried commercially producing herbs and flower seeds, while others worked in the Art Pottery Studio established in 1909. Pieces of this pottery are now prized possessions in several museums.

A print shop was started to continue the publication of the monthly magazine, the Artisan, begun in 1900 in Syracuse. Pamphlets, study courses, and papers were sent through the mails to members world-wide. A general store and post office were opened in 1908 just in front of the print shop and have been serving the community ever since. The store and post office were moved half a block in 1949 without interrupting service.

The community, which presently covers about 95 acres, grew as land was acquired. Temple members and friends built small cottages and planted small shrubs and trees that grew over the years to transform the community into a woodsy place, protected by tall eucalyptus, Arizona cypress, and Monterey pine trees.[7]

Some children raised at Halcyon became well-known as engineers and scientists.

George Russell Harrington taught at various schools, including Stanford University and Massachusetts Institute of Technology, won prestigious awards, and had numerous patents. Russell and Sigurd Varian developed early radar systems that were essential parts of the Allied defense during World War II. For all these figures, the Theosophical principles learned at the Temple were applied practically and became the basis of their successful engineering careers.[8]

The leader of the Temple of the People community is designated the Guardian-in-Chief. Five people have held that position:

Like other sacred constructions, the Temple is built on lines of mathematical and geometrical symbolism.

This unique structure, surrounded by white pillars supporting the roof, is triangular in shape, symbolising the heart, the Unity of all Life, as well as the many trinities central to the spiritual core of all the great teachings throughout history. The windows are placed high to symbolise the Divine Light that comes from Above and are glazed with a special opalescent glass to diffuse the sunlight into a golden glow. The seven doors are symbolic of the key number of the Universe..[9]

Theogenesis represents a third volume of The Secret Doctrine by Helena Petrovna Blavatsky, which grew from verses of unknown origin that were printed in The Temple Artisan:

Theogenesis presents a third section of the Ancient Stanzas of Dzyan. The first two sections, Cosmogenesis and Anthropogenesis, were published with commentaries by Madame Helena P. Blavatsky in The Secret Doctrine. Theogenesis continues in this tradition, with commentaries following each Stanza.[10]

THEOGENESIS contains as its core the third section of the Ancient Stanzas of Dzyan. The first two sections – Cosmogenesis and Anthropogenesis – were revealed by Madame Helena P Blavatsky in The Secret Doctrine. Unlike the Secret Doctrine, THEOGENESIS speaks to the seeks in layman’s terms about the evolutionary path of man. Its message about the inherent divinity of mankind is particularly relevant to this critical cycle of time which humanity faces. The current edition of THEOGENESIS also includes the much-acclaimed lessons of Dr. William H Dower, co-founder of The Temple of the People. This section of 44 chapters, completes with separate index for easy reference covers Occultism for Beginners; Biological Chemistry and Occult Relations; Evolutionary Waves and the Basic Principles of Brotherhood.[11]

Other works were written by William H. Dower, Jane W. Dower, Mrs. Francia A. La Due, and Harold E. Forgostein.