The Light of Asia (book) 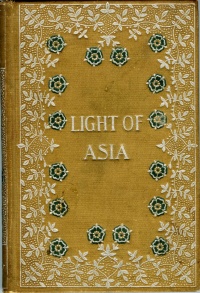 The Light of Asia is a poetic work by Edwin Arnold based on the life of Gautama Buddha. Siddhartha was a prince, well-educated and of high status. He married a beautiful and had a son. On one of his tours around the country, he was shocked and saddened by the suffering of the people and the abuse of animals. He left the palace and relinquished all worldly pleasures to go in search of truth and meaning. Finally he achieved Nirvana while sitting under a Bodhi tree in Gaya. From that point on, he was known as the Buddha. The main principle of his teachings was ahimsa or non-violence toward fellow creatures.

The very first issue of The Theosophist featured a long review that was almost certainly written by Madame Blavatsky herself:

For our part, we regard the poem as a really remarkable specimen of literary talent, replete with philosophical though and religious feeling - just the book, in short, we needed in our period of Science of Religion - and the general toppling of ancient gods.

The Miltonic verse of the poem is rich, simple, yet powerful, without any of those metaphysical innuendoes at the expense of clear meaning which the subject might seem to beg... There is a singular beauty and a force in the whole narrative... Jar it may on Christian ears, the theme chosen by Mr. Arnold is one of the grandest possible. It is as worthy of his pen, as the poet has showed himself worthy of the subject. There is a unity of Oriental colouring in the descriptive portion of the work, a truthfulness of motive evinced in the masterly handling of Buddha's character, which are as precious as unique; inasmuch as they present this character for the first time in the history of Western literature in the totality of its unadulterated beauty.[1]

In the sumptuous Buddhist literature of the world, "The Light of Asia", by Sir Edwin Arnold, is without any doubt, a unique work. It is primarily because, this is the only original poem written in English on the Buddha, throughout the long history of Buddhism. This distinction is quite necessary to be established, because there are translations of original Pali works into English and other languages. Some of these are outstanding instances of spiritual poetry. Sir Edwin Arnold, the Author of this epic poem, was initially persuaded to compose this sacred work, as a result of his deep and abiding desire to aid in the better and mutual understanding between East and West.[2]

One reason for the striking success of The Light of Asia with Western readers was that Arnold, by filtering Buddhist myth through his Victorian consciousness, created an intellectual landscape familiar enough not to be forbidding but still exotic enough to be intriguing.[3]

Helena Petrovna Blavatsky specified that each year on the anniversary of her death, her friends should gather and read from The Light of Asia and the Bhagavadgītā.[4]

Impact of this work

Arnold's work caught the imagination of many in the West, and greatly increased popular interest in Buddhism and the religions of the East.

Mahatma Gandhi was among those influenced by this work:

The first two religious books that Gandhiji studied during his student days in London (1888–1891) were Sir Edwin Arnold’s English translation of the Bhagavad Gita—The Song Celestial (1885)—and The Light of Asia (1879)—which depicted the life and philosophy of Gautama Buddha. He writes in his Autobiography; "I read it [The Light of Asia] with even greater interest than I did the Bhagavad Gita. Once I had begun it, I could not leave off... My young mind tried to unify the teaching of the Gita, The Light of Asia, and the Sermon on the Mount. That renunciation was the highest form of religion appealed to me greatly."[5]

Joseph Campbell wrote of being introduced to Arnold's work when he was nineteen years old:

On the return trip from Europe, in 1924, there were three dark young men seated in steamer chairs on the deck. I noticed that there was a young woman who knew them...

It happened that one of them was Jiddu Krishnamurti, and the others were his brother Nityananda and his secretary at the time, Rajagopal. This was my introduction to the world of India. And the young woman who introduced me gave me Edwin Arnold's The Light of Asia, which is the life of the Buddha from the sutras. And that was the opening up, and it was like a light going on.

When I went to Europe as a student of literature, philology, romance literature, and then to Germany and started my Sanskrit... it had started with what I learned from that little book about the Buddha.[6] 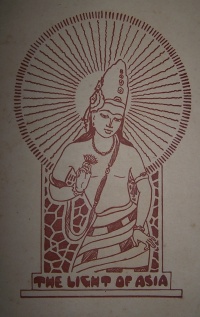 Cover of program for Rukminis' production

Rukmini Devi Arundale created a theatrical production of The Light of Asia with the assistance of Alex and Mary Elmore. It was also produced by All India Radio at their Marshal Road Studios.[7] The broadcast was available by shortwave radio around the world.[8]

The Indian film industry, in its infancy, chose The Light of Asia as a subject for a 1925 production:

Bengal-born Himanshu Rai, while pursuing his legal education at the Inner Temple in London, came into contact with playwright Niranjan Pal, who was working on a script based on Edwin Arnold's poem, Light of India. The two set up a partnership. Pal got Peter Ostermeyer's German company, Emelka, to pre-buy the European distribution rights and contribute the technical crew consisting of Director Franz Osten (Ostermeyer's brother), cameraman Joseph Wirsching, production designer Karl von Spretti and assistants and all technical equipments, while Rai got the Delhi-based Great Eastern Film Corporation owned by Moti and Prem Sagar to invest in one-third of the production. And thus took shape Light of Asia (1925) - the first significant international co-production. The unique film was shot entirely in India, in actual locales, without aid of studio sets, artificial lights, faked up properties or make-up.[9]

Another theatrical version was presented in 1918 in the upper gardens at Krotona Institute of Theosophy in Hollywood, California. It ran for 35 performances in the Krotona Stadium that could seat 800 people, and also in Beachwood Canyon.[10]

Camille Zekwer and Charles Wakefield Cadman, then living at Krotona, composed the music; Ruth St. Denis and dancers from Denishawn danced; and Louis Horst was musical director ... Christine Wetherill Stevenson, a theosophist from Philadelphia, whose name does not appear on the program, commissioned the dramatization and sponsored the production.[11]

According to Joy Mills:

A pre-convention attraction which caused a great stir was the presentation of "The Light of Asia," as a dramatic production with the well-known actor, Walter Hampden (hailed by one newspaper as "America's best Hamlet") in the leading role as the Buddha. Staged in the Krotona Stadium, the play attracted great attention in Los Angeles and surrounding communities; among the distinguished spectators were the Mayor of Los Angeles, John Masefield of England, the Japanese consul, and a number of prominent motion picture producers and stars."[12]

Helen Keller attended a performance while she was visiting Hollywood during production of a film about her life. She wrote about the play to A. P. Warrington:

I enjoyed The Light of Asia very much. I should have liked to meet the actors, but I was very tired that evening. I hope, however, I may have an opportunity of meeting you and the other friends on the hilltop before I return East. You have made me realize anew that the art of being kind is the greatest thing in this sad old world.[13]

Walter Hampden must have been pleased with the Krotona production, because in October 1928 he produced, staged, and starred as Siddhartha in another production at his own Hampden's Theatre in New York City. Ruth St. Denis was again the choreographer. It was described as an original play by Theosophist Georgina Jones Walton (who was married to Robert Kelsey Walton), and ran for 23 performances.[14]