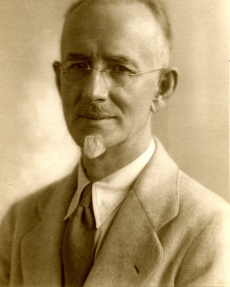 Albert Powell Warrington (August 27, 1866 - June 16, 1939) was an attorney and banker who served as President of the American Theosophical Society from 1912-1920 and who founded the Krotona colony in Hollywood. 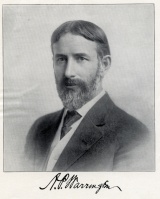 A. P. Warrington was born in Berlin, Maryland on August 27, 1866 to William Warrington, a planter, and his wife Emily Ann Powell. Albert had a younger brother and an older sister.[1][2]

After completing high school in Berlin, Albert went into the railway service in Norfolk, working his way up the ranks of the New York, Philadelphia and Norfolk Railroad (NYP&N) until he was Chief Clerk and traffic manager. He studied law at the University of Virginia, and began his own practice in 1891, still living in Norfolk. He became a junior partner of Neely, Seldner, and Warrington, and after 1897 was principal in his own firm. He continued to have a law practice until 1914, but after 1910 devoted most of his time to the American Theosophical Society.[3][4]

A. P. Warrington was admitted to the American Theosophical Society on June 22, 1896. His membership was sponsored by Alexander Fullerton and Hannah E. Phillips.[6][7]He studied Theosophy by correspondence with Fullerton, who was then General Secretary of the American Section. He soon met Annie Besant and C. W. Leadbeater when they were touring in the United States. He wrote:

The first time I met Dr. Annie Besant was in Washington in 1897... I had longed to meet her ever since coming into the Theosophical Society the year before; and when I learned she was in America and would very soon be in Washington, I hurriedly made plans to join her there. She was visiting the home of Mrs. Adelaide Johnson, the widely known sculptress. Promptly at the hour appointed she entered the room and went right to business. What could she do for me?[8]

During their conversation, Warrington expressed his wish to work on the astral plane in the manner described in Leadbeater's book Invisible Helpers. He experienced a series of tests in dreams, and the next day Mrs. Besant confirmed that he had learned a lesson.

The next time I met Mrs. Besant was in 1899 in London on Avenue Road... Mrs. Besant showed how very wise she was in quickly discerning what was wrong and what would set the wrong right.[9]

In 1905 he was employed by Colonel Olcott, the President of The Theosophical Society, to aid in obtaining the Fuente bequest in Cuba; and incidentally, spent a month there in close touch with the Colonel himself.

In 1906 he attended his first Convention (in Chicago) and was one of the little handful to take a strong and successful stand there in the fight for true fellowship in the Society. As Chairman of a number of subsequent Conventions, when the same question was being fought over in one way or another, he was an important factor in the maintenance of America's stand for Brotherhood.[10]

He wrote of his close relationship with Annie Besant:

Then followed a period of years during which she remained away from America, and so I did not see her again until 1907, when she gave me the appointment of American representative for a special branch of her work [the E.S.], a position which I held until 1928...

Her visits of 1907 and 1909 were concerned no little with the so-called "X case," which had caused much disturbance in the American Section. Having joined her on both occasions, I traveled with her and learned much of how she worked. On one of these occasions we toured the whole country, and I heard every lecture she gave. It became a little game between us for me to say at the end of the lecture if she showed signs of having been influence by either of the Masters in the course of her address, and if so, which one. Sometimes I would miss my guess, but for the most part I guessed correctly.[11] 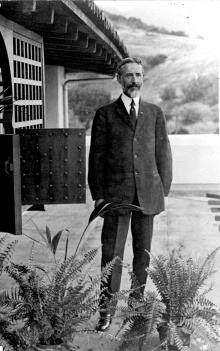 A. P. Warrington in Krotona, Hollywood 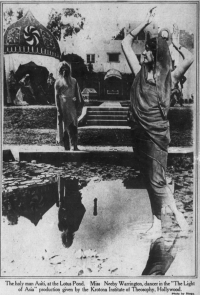 In 1910 he went to California, where in 1912, with generous assistance he founded the Theosophical center in Hollywood known as Krotona, of which he has since been the leading spirit. To the up-building of this child of his dreams he gave some of the best years of his life. Previously (1907) he had been appointed the Corresponding Secretary of the E. S. for North and South America, and soon after starting this center he was made General Secretary (1912) of the American Section.[12]

His daughter Neely was active in the "Servants of the Star" organization for children.[13] She had been admitted as a member of the Society on February 8, 1913.[14] When she was twenty, Neely also assisted at the School of the Open Gate.

Neely Warrington, a pupil of Ruth St. Dennis, has assisted Miss Jewett with the little ones and has ably instructed the older students in dancing.[15]

Neely also performed as a dancer in Krotona's production of The Light of Asia in June, 1918. 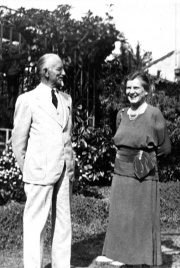 A. P. and Betty Warrington after wedding

Early in 1931, APW married Mrs. Betty Robertson in Ojai in a private ceremony at Warrington's residence at Krotona. The officiant was Bishop Irving S. Cooper.[18] Betty was an active member of the Theosophical Society from when she joined on January 10, 1915 until at least 1983. She accompanied Mr. Warrington to Adyar during his time as interim President of the international Theosophical Society (Adyar), and was known there as a gracious hostess.

.. The membership of the American Section was more than doubled during this period.[19]

After seven years, Warrington resigned from his position as General Secretary and began a period of travel with the international Society's president, Dr. Besant, to Australia, England, France, and India.

Returning from Australia he accompanied Krishnamurti and Nityananda to Ojai Valley in California, where he arranged for their sojourn of nearly a year. This visit formed the basis of Krishnaji's interest in Ojai and the later development of his home there, the periodical Camps, etc.[20]

Move of Krotona to Ojai

In 1924, with Dr. Besant's approval, Mr. Warrington ordered the Hollywood Krotona estates to be sold and the center removed to Ojai Valley where it is now located on a lovely site of a mid-valley hill, or ridge, chosen by Mr. Warrington because of its very great beauty.[21] 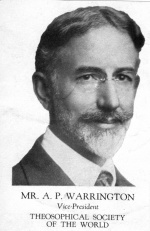 As Vice President of TS Adyar

In 1928 Dr. Besant nominated Warrington to be vice president, replacing Mr. Jinarājadāsa. Following confirmation by the General Council, Mr. Warrington turned over his position as Corresponding Secretary of the E. S. to Marie Poutz.

In the autumn of 1931 he was called to Adyar because of the continuing illness of the President. There he represented her in preparing the annual reports for the years 1931 and 1932 and at her death, on September 20, 1933, there fell upon him, as Vice-President, the duty and responsibility of the Presidential Office; and for the period of nine months provided in the constitution for the choosing of a new President he served in that capacity. Because of ill health he chose not to be a candidate for the office and therefore utilized the period of the interregnum to safely and smoothly carry the Society through the term when its future policies were being determined by the members. In the midst of the naturally contending forces of such a period he rendered splendid service to the Society in maintaining its principles and keeping it steadily on its course.

Under his editorship and his writing of the "Watch Tower Notes" The Theosophist continued as an inspiration and a welding influence among members throughout the world.[22]

Following his years in Adyar, Warrington returned to Krotona in Ojai, California. He was a member of Ojai Valley Oaks Lodge and continued to be a member of the General Council of the Theosophical Society until 1937. On June 16, 1939, he died in Ojai. Cremation took place on June 17.[23]

Mrs. Betty Warrington continued living in Ojai until her death in May, 1986. She continued being active in the Ojai Valley Lodge until late in life, was a member of the Theosophical Society from October 1, 1915 until her death.

Neely Anne Warrington lived in New York for a few years, but by 1938 had moved back to California. She lived in Santa Barbara until her death on May 5, 1978, working in a library.

He authored 217 articles under the name AP Warrington, another 37 [mostly book reviews and obituaries] under the initials APW, and probably numerous others anonymously or as the General Secretary or National President.

Almost all of Warrington's writings were for periodicals or reports, but he did contribute an important article to the Encyclopedia American. In the 1905 edition, "Theosophy" was on pages 208-213 of Volume 15. It is available at Hathitrust.

He also contributed a chapter on "Orthodox Judaism" to Varieties of American religion; the goal of religion as interpreted by representative exponents of seventeen distinctive types of religious thought, which was edited by Charles Samuel Braden (Chicago, New York: Willett, Clark & Co., 1936).