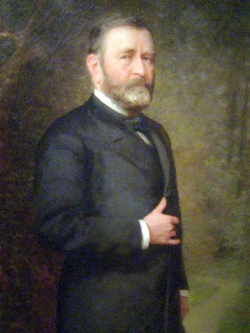 Thomas Le Clear (1818-1882) was a prominent American painter known to Theosophists for his oil portrait of Helena Petrovna Blavatsky. NOTE: no photograph of the HPB portrait is available.

According to the American Cyclopedia,

He began to follow art professionally before he had had any instruction, and his later advantages in that direction were confined to simple observation of the works of other artists. He went to London, Canada, with his father in 1832, and after painting portraits for a time there, and in Elmira and Rochester, he made his way to New York city and opened a studio in 1839. In 1844-60 he resided in Buffalo, but afterward returned to New York [City]. In 1863 he was elected a National academician. Among his compositions are “The Reprimand ”; “ Marble-Players ”; and “ Itinerants ” (1862). Of his numerous portraits, one of the best is that of George Bancroft, at the Century club, New York; other excellent portraits are those of William Cullen Bryant, Bayard Taylor, President Fillmore, and Edwin Booth as Hamlet.[1]

Around 1880, Le Clear was commissioned to paint the portrait of Ulysses S. Grant shortly after the former president returned from a world tour. Two versions were painted. One was originally owned by Grant personally, and now hangs in the National Portrait Gallery of the Smithsonian Institution. The other is in the White House collection.[2]

Mr. Le Clear was acquainted with Madame Blavatsky and Colonel Olcott in New York City. After Blavatsky created her "Portrait of the Yogi Tiravalla" phenomenally, Olcott wrote, "Le Clear, the Noted American portrait painter, declared it unique, distinctly an 'individual' in the technical sense; one that no living artist within his knowledge could have produced."[3] An article published in The Bombay Gazette reiterated:

Thomas LeClear, an eminent American painter, and William R. O’Donovan, an equally distinguished sculptor, affirmed in a London journal, that no living artist could, in their opinion, equal it in vigour, breadth, and uniqueness, while they were both unable to decide upon the nature of the colouring substance employed in the manner of its application.[4]