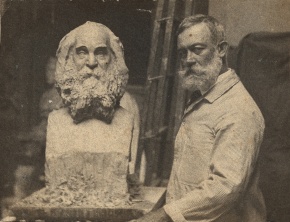 William Rudolf O'Donovan and his bust of Walt Whitman (May 1891). Photograph by Thomas Eakins.[1] 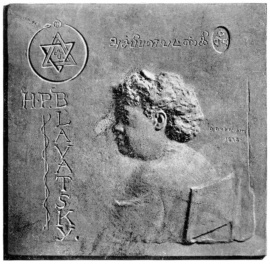 Photo of medallion from frontispiece in Old Diary Leaves

William Rudolf O'Donovan (March 28, 1844 – April 20, 1920) was a distinguished American sculptor and art critic who made the bronze medallion of Mme. Blavatsky.

He was born in Preston County, Virginia (now West Virginia), and taught himself to sculpt. After the Civil War, in which he served in the Confederate army, he opened a studio in New York City and became a well known as a sculptor, especially of memorial pieces. In 1878 he become an associate of the National Academy of Design. George Washington was a favorite subject of his, and he published a series of papers on Washington portraits.[2]

Col. Olcott wrote of him:

He was a rare chap, that Irishman; a sculptor of marked talent, an excellent companion with a dry humor that was irresistible. HPB was very fond of him and him of her. He modeled her portrait from life in a medallion, which was cast in bronze and which is in my possession.

What he may be now I know not, but at that time he was fond of a glass of good whiskey (if any whiskey may be called good), and once made a roomful roar with laughter by a repartee he gave to one of the company present. They were drinking together, and the person in question after tasting his glass, put it down with the exclamation, "Pah! What bad whiskey that is!" O'Donovan, turning to him with solemn gravity, laid a hand upon his arm and said, "Don't, don't say that. There is no BAD whiskey, but some is better than other."

He was a Roman Catholic by birth, though nothing in particular, it appeared, in actual belief. But, seeing how hot and angry HPB would always get when Roman Catholicism was mentioned, he used to pretend that he believed that that creed would eventually sweep Buddhism, Hinduism, and Zoroastrianism from the face of the earth.

Although he played this trick on her twenty times, HPB was invariably caught again in the trap whenever O'Donovan set it for her. She would fume and swear and call him an incurable idiot and other pet names but to no purpose. He would sit and smoke in dignified silence, without changing face, as if he were listening to a dramatic recitation in which the speaker's own feelings had no share.

When she had talked and shouted herself out of breath, he would slowly turn his head towards some neighbor and say, "She speaks well, doesn't she, but she does not believe that. It is only her repartee. She will be a good Catholic some day." Then when HPB exploded at this crowning audacity and made as if to throw something at him, he would slip away to the kitchen and make himself a cup of tea!

I have known him bring friends there just to enjoy this species of bear baiting, but HPB never nourished malice and after relieving herself of a certain number of severe scoldings, would be as friendly as ever with her inveterate teaser.[3]

Assessment on the Portrait of the Yogi Tiravalla

He examined the Portrait of the Yogi Tiravalla phenomenally produced by Mme. Blavatsky and wrote to the Editor [William Henry Harrison] of the The Spiritualist attesting that it was a real phenomena and of a very high quality:

The work is of a kind that could not have been done by any living artist known to any of us. It has all the essential qualities which distinguish the portraits by Titian, Masaccio, and Raphael: namely, individuality of the profoundest kind, and consequently breadth and unity of as perfect a quality as I can conceive. I may safely assert that there is no artist who has given intelligent attention to portraiture, who would not concur with Mr. Le Clear and myself in the opinion which we have formed of this remarkable work; and if it was done, as it is claimed to have been done, I am at utter loss to account for it.[4]