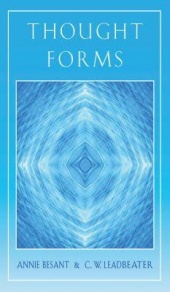 Thought Forms was a book written by Annie Besant and Charles Webster Leadbeater in 1905 on the titular subject of Thought-Forms.

The genesis of the book was an article by Annie Besant printed in the September, 1896 issue of Lucifer.[1] These are the original illustrations from that article:

Charles Leadbeater worked with Annie Besant to develop this concept further, describing their clairvoyant observations to painters to produce the images for the 1905 book. The illustrations were painted by "Mr. John Varley [1850-99, grandson of John Varley], Mr. Prince and Miss Macfarlane."

The first edition of Thought-Forms came out in 1905. It was published in London and Benares by the Theosophical Publishing Society, and in New York by John Lane. In the United States, the book was distributed by the Theosophical Book Concern of Chicago. The volume was hardbound in both green and red covers.

When the next edition was published in 1925 by the Theosophical Publishing House, it incorrectly stated "First Printed 1901 - Reprint 1905 - Reprint 1925." John L. Crow wrote an account of how this error was propagated through subsequent editions and library catalogs. "Why the date of 1901 was introduced is unknown. Kurt Leland, an Annie Besant specialist, theorized that the publishers were confused by Besant's publication, Thought Power, which was published in 1901."[2]

Translations have been published in German, French, Japanese, Slovenian, and probably other languages.

The influence of Thought Forms on artists is a rich area of study by modern scholars, and has been much discussed in academic events such as the Enchanted Modernities conferences. There is no question that Wassily Kandinsky, Piet Mondrian, Paul Klee, and other visual artists were inspired by the images presented by Besant and Leadbeater.

Richard Smoley wrote of the book:

It would be difficult to overstate the importance of Thought Forms on twentieth-century art. This book, along with another book by Besant and Leadbeater, Man Visible and Invisible (1906), would become one of the major influences on the Russian artist Wassily Kandinsky, whose book On the Spiritual in Art, published in 1912, provided “perhaps the most influential doctrine by an artist of the twentieth century,” according to Maurice Tuchman, senior emeritus curator of the Los Angeles County Museum of Art. 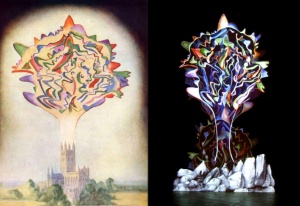 Kandinsky insisted that in his time, the viewer had become inured to any kind of inner meaning, what he called Stimmung, in art. This deeper apprehension, he contended, was impeded by the fact that art was preoccupied with representing forms in the natural world. The art of the future, he said, would break through this barrier through the use of pure color and shape — in a word, abstraction. Abstract art was born. Through Kandinsky and other channels, including the Anthroposophist Rudolf Steiner, the thought forms of Besant and Leadbeater would shape the world of twentieth-century art. Wassily Kandinsky, Piet Mondrian, Paul Klee, and other artists were heavily influenced by this book.[3]

Modern artists and art historians have often interpreted this book entirely in the context of art, whereas the authors never intended to suggest their forms and correspondences as tools for artistic expression. Their work was aimed, rather, at demonstrating how clairvoyants perceive emotions in the human aura. This quotation, for example, by a respected academic implies that Besant and Leadbeater were trying to present a blueprint of correspondences for use by artists:

From a theoretical point of view, this book is essential for understanding the collaboration between theosophical artists. In and of itself, the idea was not new. Throughout the nineteenth century—from Goethe to Richard Wagner, Charles Baudelaire, and Arthur Rimbaud — intellectuals had imagined a general system of correspondences between sounds, colors, and shapes. Ultimately, the hope was to produce a comprehensive oeuvre that, beyond its aesthetic qualities, would resonate, from an esoteric point of view, with the arcane, thanks to a network of correspondences between the elements of the oeuvre. Rather utopic and often reduced to a simple game of analogies, this project was realized in theosophical theories and particularly in the work of Besant and Leadbeater. The book furnished artists with easily used tables of correspondence between colors, emotions, and sounds... At the same time, the authors left the artists great liberty. In general, the plates in the book were limited to presenting examples of shapes, often abstract and colored, corresponding to musical themes... These recall the abstract compositions that Klee and Kandinsky created in later years. In this manner, the book by Besant and Leadbeater stimulated theosophical artists to collaborate — the Symbolists found in it an extension of the Wagnerian Gesamtkunstwerk, and the avant-garde artists saw the possibility of treating the correspondences within an abstract perspective.[4]

Here are more recent examples of the influence of Besant, Leadbeater, and Thought Forms:

The Beatrice Wood Center for the Arts held a 3-day workshop with lectures by Richard Flores and Kevin Wallace on April 12-14, 2013:

This three-day workshop is based upon Thought Forms, the 1901 book by Annie Besant and Charles Leadbeater that inspired Wassily Kandinsky, Piet Mondrian, Paul Klee and countless other artists. Participants will explore the ideas that pre-date and inspired abstract painting through insights into the processes of seeing and recording impressions in form and color.[6]

SALTWATER: A Theory of Thought Forms was the name of the 14th Istanbul Biennial in Turkey, which ran from September 5 to November 1, 2015. It involved more than 100 artists in 36 venues, and included a display honoring the Besant-Leadbeater work.[7]

Theosophist Annie Besant saw ‘thought forms’ as embodied entities of the imaginal realm, visible and vibrating states of what remains generally invisible – forms of the real world that can be apprehended through intense awareness, meditation and attention.

A number of drawings, paintings, installations, films, objects, books, collaborations, and research-based events will be viewable as thought forms – waves or oscillating patterns of repeating and differing lines that structure and enfold all forms of transference of energy – from brain waves to shockwaves after an explosion, from sound waves and waves of water to electromagnetic waves of different lengths and frequencies, including radio waves and light.[8] 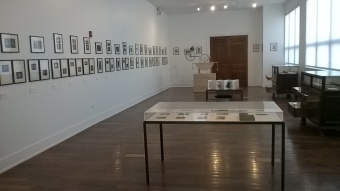 Subsequently, a portion of the Turkish exhibit was displayed as Intention to Know: The Thought Forms of Annie Besant, an exhibit presented from December 29, 2015 through March 1, 2016 at the Stony Island Arts Bank in Chicago following the run in Turkey. The display was conceived by Carolyn Christov-Bakargiev in cooperation with Theaster Gates and the Rebuild Foundation.