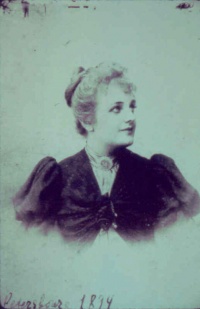 Vera Vladimirovna Johnston (née de Zhelihovsky) (1864 - 1920) was a Theosophist and niece of H. P. Blavatsky. She was the wife of Charles Johnston. After the death of her aunt the Johnstons became members of the Theosophical Society (Hargrove).

In August, 1888, she married Sanskrit scholar Charles Johnston. The ceremony took place at Mme. Blavatsky's home, 17, Lansdowne Road, London. Col. Olcott, visiting London at the time, represented Vera's mother and the rest of the family at the civil marriage at the registrar's office.[1] They did not have children.

From December 1894 to December 1895, after the death of Mme. Blavatsky, she translated at the request of William Q. Judge her aunt's Russian-language letters to her family, so that they could be published in The Path.[2]

In October of 1896, only a few months after Mr. Judge’s passing, Vera and her husband relocated permanently to New York, to carry on the work Theosophical work. In 1897 the Johnstons became members of the Theosophical Society in America, (later renamed Theosophical Society) headed by Ernest Temple Hargrove. 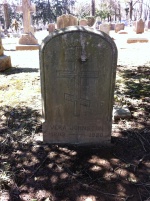 Sometime after the turn of the century, the Johnstons became also associated with the Russian Orthodox cathedral in New York. In 1912, the Russian Archdiocese moved its seminary to Tenafly, New Jersey. Both Johnstons were deeply involved in the work of the Russian Mission. Vera ran the seminary’s booth at a Russian bazaar in New York City (New York Times, 3/28/1915) and her husband was listed as "Teacher of English Language" there in 1918.[3][4]

Vera and her husband were also members of the Order of the Living Christ.

On August 17, 1920, Vera died of heart disease, at the age of 57.[5] Her body was buried in the churchyard of Old St. David's Church (Episcopal), Radnor, Pennsylvania. "The grave is marked by a white stone on which her name is plainly cut."[6]

Vera and The Secret Doctrine

In June 1886, Vera and her mother visited Mme. Blavatsky in Elberfeld, Germany, where her aunt was writing The Secret Doctrine. Later she wrote the following reminiscence of her time there with HPB:

Generally on coming down in the morning from the bedroom I occupied in the house of Madame Gebhard together with my mother, I found my aunt deep in her work. One day I saw evident traces of perplexity written on her face. Not wishing to disturb her I sat down quietly and waited for her to speak. She remained silent a long time with her eyes fixed on some point on the wall, and with a cigarette between her fingers, as was her custom. At last she called out to me:

"Vera", she said, "do you think you could tell me what is a pi?"
Rather astonished at such a question, I said I thought a pie was some kind of an English dish.
"Please don't make a fool of yourself", she said rather impatiently, "don't you understand I address you in your capacity of a mathematical pundit. Come and see this."
I looked at the page that lay before her on the table, and saw it was covered with figures and calculations, and soon became aware that the formula π = 3.14159 was put down wrongly throughout them all. It was written π = 31.4159. With great joy and triumph I hastened to inform her of her mistake.
"That’s it!" she exclaimed. "This confounded [decimal point] bothered me all the morning. I was rather in a hurry yesterday to put down what I saw, and today at the first glance at the page I intensely but vaguely felt there was something wrong, and do what I could I could not remember where the [decimal point] actually was when I saw this number."
Knowing very little of Theosophy in general and my aunt’s ways of writing in particular at that time, I of course was greatly struck with her not being able to correct such a slight mistake in the very intricate calculations she had written down with her own hand.


"You are very green", she said, "if you think that I actually know and understand all the things I write. How many times am I to repeat to you and your mother that the things I write are dictated to me, that sometimes I see manuscripts, numbers, and words before my eyes of which I never knew anything."[7]

The passage in question is probably Mme. Blavatsky's commentary to the Stanza IV sloka 3 of the first volume of The Secret Doctrine.[8]

Mrs. Johnston translated some of her aunt's letters from the Russian for publication in Lucifer and other periodicals, and also her book From the Caves and Jungles of Hindostan. The Union Index of Theosophical Periodicals lists 22 articles by or about Vera Johnston.