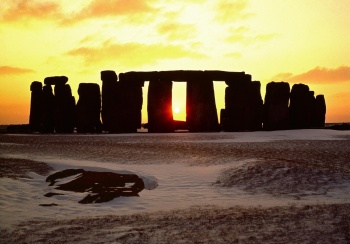 Winter Soltice is a celestial occurrence of great significance in most religions and cultures as the day with the shortest period of daylight and longest night of the year. In winter the Sun appears at its lowest elevation over the horizon, because the Earth's North pole has reached its maximum tilt away from the star. In modern times the event generally falls on December 21 or 22. Common themes of solstice celebrations are return, rebirth, renewal, and the victory of light over darkness.

The word "solstice" means "the standing still of the sun." From December 22-24 the sun seems, astronomically, to stand still. As a result of the inclination of the earth's axis, the sun reaches at a certain time of the year its southernmost point, when it rises in the southeast and sets in the southwest. The poles of the earth and sun then lie in the same vertical plane, as they do at the summer solstice in June, when the sun reaches its northernmost point, and rises in the northeast and sets in the northwest. At the two solstices the sun appears to stand still for a day before beginning its return journey in the opposite direction.[1]

Several Theosophists have commented on the winter solstice.

Christmas comes just at the time of the winter solstice; the days then are shortest, and Darkness is more upon the face of the earth than ever. All the sun-gods were believed to be annually born at that epoch; for from this time its Light dispels more and more darkness with each succeeding day, and the power of the Sun begins to increase.[2]

We are in the Winter Solstice, the period at which the Sun entering the sign of Capricornus has already, since December 21st, ceased to advance in the Southern Hemisphere, and, cancer or crablike, begins to move back. It is at this particular time that, every year, he is born, and December 25th was the day of the birth of the Sun for those who inhabited the Northern Hemisphere. It is also on December the 25th, Christmas, the day with the Christians on which the “Saviour of the World” was born, that were born, ages before him, the Persian Mithra, the Egyptian Osiris, the Greek Bacchus, the Phoenician Adonis, the Phrygian Attis. And, while at Memphis the people were shown the image of the god Day, taken out of his cradle, the Romans marked December 25th in their calendar as the day natalis solis invicti.[3]

Gottfried de Purucker wrote of the solstice in his book The Four Sacred Seasons, in which he provided great detail on the initiations represented by the four major celestial events – the spring and autumn equinoxes, and the summer and winter solstices. In Wind of the Spirit he reflected on the lights of the season:

Now the Winter Solstice is the beginning of the cosmic New Year, and so . . . northern peoples, knowing some of the ancient truths, celebrated the cosmic event with the Christmas Tree. It symbolizes the World Tree, and the lights are the suns that bestrew the deeps of Space, hinting to us the message from the divinities who constantly give us the light of love, the light of mind, the light of hope eternal.[4]

On the night of December 21/22, the sun reaches its southernmost point. Were it to remain in the south, it would mean death for living beings in the northern hemisphere. Thus we greet the returning sun as a "savior." On the night when it begins its northward journey, the constellation Virgo, the celestial virgin, appears on the eastern horizon at midnight and is therefore, astrologically, the ascendant. This coordinates with the myth of the various saviors of humanity, immaculately conceived and born from a virgin. Later, the sun symbolically sacrifices its life on the cross when it passes over the equinoctial point at the spring equinox, an apparent descent as seen from the southern hemisphere and an ascent in the northern sky. The focal points of the year — the four sacred seasons of the solstices and equinoxes — affect the consciousness of all humanity; and no matter on which day the festivals fall, they can provide gateways for the properly attuned heart and mind, allowing us to enter the forecourt of the temple of learning and life. . .

At the winter solstice the universal currents of life help human consciousness to enter divine spheres. At the same time spiritual energy can descend from higher worlds into the human arena: the gods "descend into hell" to garner experience in their underworld — our own world — thereby bringing inspiration and enlightenment to humanity. At this time each of us also may undergo a new birth. Nature has opened the door, and it is up to us to recognize this and take a step further.[5]

People of the Neolithic period constructed Stonehenge on the Salisbury Plain of England between 3000 BCE and 2000 BCE. It is a ring of standing stones topped with lintels, with trilithons and other structures of massive size that serve as an astronomical calculator. At dawn of the Summer Solstice and sunset of the Winter Solstice, sunlight shines between the stones, and since the Stone Age, people have gathered every year to celebrate the cycle of nature. 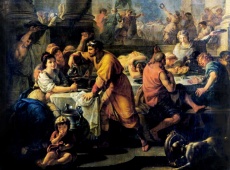 Ancient Greeks and Romans had festivals honoring Saturn/Cronus and Ceres/Demeter, and Bacchus. Brumalia was held for a month beginning in late November, and was followed by Saturnalia for three-seven days of feasting and merriment.

Yule was a festival observed by indigenous Northern European peoples, and especially in Germanic cultures, connected to the god Odin. It involved three days of animal sacrifices, feasting, and drinking of ale or mead.

Modern adherents of Wicca celebrate the winter solstice as the rebirth of the Great Horned Hunter God. Practices for modern Yule vary, but gift-giving, bonfires, and feasts are common, as are visits to sacred sites such as Stonehenge.

Commentary to the Chinese I Ching or Book of Changes gives this perspective:

The winter solstice has always been celebrated in China as the resting time of year. . . In the winter the life energy . . . is still underground. Movement is just at its beginning; therefore it must be strengthened by rest, so that it will not be dissipated by being used prematurely. . . The return of health after illness, the return of understanding after an estrangement: everything must be treated tenderly and with care at the beginning, so that the return may lead to a flowering.[6]

The Chinese people celebrate Dongzhi, the “arrival of winter” around December 21-23, according to the traditional Chinese calendar. Originally a harvest festival, it is a time for families to gather and celebrate with special foods. Japanese, Koreans, Taiwanese, and Vietnamese peoples have similar festivals. Celebrants recognize the cycles of nature, and the harmony of yin and yang at the annual point of balance when light expands and energy increases.

Alan Donant wrote of the initiates of the ancient Mystery Schools:

At the winter solstice they experience consciously the process of death and understand that it simply means life of a larger kind. Leaving their bodies behind as if dead, their consciousness goes through the processes of death, passing through the inner circulations of the earth and of some of the planets, and up to the very portal of the sun before returning. If successfully accomplished, this event produces a teacher who has experienced the consciousness behind the laws he earlier came to understand and tried to live by.

A second event, in a higher phase of the Mysteries, also occurs at the winter solstice. It happens very rarely, perhaps not more than once every 2,000 or more years. When the Moon is new, and the Earth, Moon, Venus, Mercury, and Sun are aligned on the winter solstice, an individual can go through a much more exalted experience. He or she runs through a great circuit of terrestrial and cosmic energies, entering the consciousness of the sun itself and returning through the circulations of the cosmos. The entire experience takes fourteen days and, if successful, the candidate arises as a Buddha or a Christ.[7]

Celebration of Hanukkah varies from late November to late December, according the the lunar Hebrew calendar. The Festival of Lights commemorates the Maccabean Revolt of Jews against their Seleucid Greek rulers during the years 167-160 BCE, after which control of the Temple in Jerusalem returned to the Jewish people. The theme of return is important in the modern eight-day festival as the return of the light (following the solstice) is symbolized by ceremonial lighting of candles. Each day of the festival, one additional candle is lit on a candelabrum ("Menorah") with nine branches, to memorialize the amazing event that occurred when the Temple was liberated, cleansed, and rededicated. Only one day's worth of oil was available to light the temple lamps, but miraculously that proved sufficient to keep the Temple illuminated for eight days. 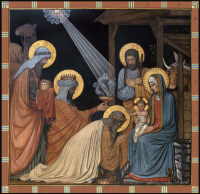 St. Chrysostom, writing in 390 A.D., says: “On this day (i.e., twenty-fifth December) also the birth of Christ was fixed lately at Rome, in order that while the heathen were busy with their ceremonies (the Brumalia, in honor of Bacchus) the Christians might perform their rites undisturbed.”[8]

Pagan themes of victory of the Sun-god over the forces of darkness, returning cycles, and new beginnings, were equally significant to Christians. Charles Webster Leadbeater wrote of Christmas as "an occasion for special outpouring of divine power,"[9] when “we are called upon … to look back to that descent of the great disciple Jesus, and to thank him for it.”[10]

The Christmas season beginning December 21 ends with Epiphany on January 6, "Three Kings Day," when three wise men from the east presented spiritual gifts to the Christ Child. Gift-giving, prayers, music, and feasting are common in Christmas festivities, along with illuminated Christmas decorations such as trees, and ceremonial lighting of Advent candles. Dates vary for adherents to Orthodox Christian and Eastern Catholic Churches.

Diwali or Deepawali is a festival of lights celebrated by Hindus, Jains, Sikhs, and some Buddhists in India. It takes place over five days in October or November, according to the Hindu calendar, and recognizes the victory of light over darkness both in the physical world and within human consciousness. Clay lamps are lit outside homes and in massive public displays.

Another Hindu festival of South India is linked to the Winter Solstice. Pongal, primarily a harvest festival, is celebrated in mid-January according to the Tamil solar calendar, featuring prayers, ritual bathing, processions, art displays, gift exchanges, feasting, and fireworks.

The Union Index of Theosophical Periodicals lists at least 50 articles about solstices.