Difference between revisions of "The Mahatma Letters to A. P. Sinnett (book)" 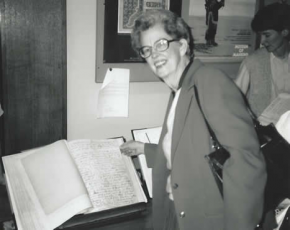 According to Annie Besant in her book A Study in Karma Mahatma K. H. and Mr. Sinnett had created a karmic link in a previous life:

Many of such helpful karmic links have we seen within the Theosophical Society. Long, long ago, He who is the Master K.H. was taken prisoner in a battle with an Egyptian army, and was generously befriended and sheltered by an Egyptian of high rank. Thousands of years later, help is needed for the nascent Theosophical Society, and the Master, looking over India for one to aid in this great work, sees His old friend of the Egyptian and other lives, now Mr. A.P. Sinnett, editing the leading Anglo-Indian newspaper, The Pioneer. Mr. Sinnett goes, as usual, to Simla; Mme Blavatsky goes up thither, to form the link; Mr. Sinnett is drawn within the immediate influence of the Master, receives instruction from Him, and becomes the author of The Occult World and of Esoteric Buddhism, carrying to thousands the message of Theosophy.[1]

When our first correspondence began, there was no idea then of any publications being issued on the basis of the replies you might receive. You went on putting questions at random, and the answers being given at different times to disjointed queries, and so to say, under a semi-protest, were necessarily imperfect, often from different standpoints.
(...)
Therefore, to put before the world all the crude and complicated materials in your possession in the shape of old letters, in which, I confess, much was purposely made obscure, would only be making confusion worse confounded. Instead of doing any good thereby to yourself and others it would only place you in a still more difficult position, bring criticism upon the heads of the “Masters” and thus have a retarding influence on human progress and the T.S. Hence I protest most strongly against your new idea. . . My letters must not be published, in the manner you suggest, but . . . copies of some should be sent to the Literary Committee at Adyar . . . [so that it] might be able to utilise the information.
(...)
The letters, in short, were not written for publication or public comment upon them, but for private use, and neither M. nor I would ever give our consent to see them thus handled.[2]

Even an "adept" when acting in his body is not beyond mistakes due to human carelessness. You now understand that he is as likely as not to make himself look absurd in the eyes of those who have no right understanding of the phenomena of thought-transference and astral precipitations — and all this, thro' lack of simple caution. There is always that danger if one has neglected to ascertain whether the words and sentences rushing into the mind have come all from within or whether some may have been impressed from without. . . . That was one of the reasons why, I had hesitated to give my consent to print my private letters and specifically excluded a few of the series from the prohibition. I had no time to verify their contents — nor have I now. I have a habit of often quoting, minus quotation marks — from the maze of what I get in the countless folios of our Akasic libraries, so to say — with eyes shut.[3]

You may, if you choose so, or find necessity for it, use . . . anything I may have said in relation to our secret doctrines in any of my letters to Messrs Hume or Sinnett. Those portions that were private have never been allowed by them to be copied by anyone; and those which are so copied have by the very fact become theosophical property. Besides, copies of my letters—at any rate those that contained my teachings—have always been sent by my order to Damodar and Upasika, and some of the portions even used in The Theosophist. You are at liberty to even copy them verbatim and without quotation marks—I will not call it ‘plagiarism’, my boy.[4]

Judge Christmas Humphreys [1901 - 1983] was the first Chairman of the Mahatma Letters Trust, which was established at the time the original letters of the Mahatmas to A.P. Sinnett were authenticated and then placed in the Department of Manuscripts at the British Museum. Rex [Dutta] served as Chairman following the death of Judge Humphreys. During his tenure Rex arranged for the Letters to be photographed in colour, thereby making them more readily accessible anywhere in the world. Members of Edmonton TS did a detailed study of The Mahatma Letters to A.P. Sinnett (transcribed and compiled by A.T. Barker) over a period of many years. We managed to obtain a set of slides of these photos, which added a very interesting dimension to our study.”[5]