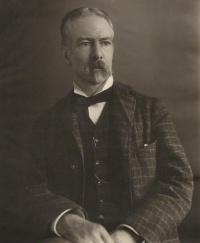 Charles Carleton Massey (December 23, 1838 - March 29, 1905) was an English barrister, keenly interested in Spiritualism. He was one of the Founders of the Theosophical Society in 1875. In 1878 he became a founder and first president of the British Theosophical Society, the first Branch outside the USA. He was also one of the founders of the Society for Psychical Research in 1882. According to Josephine Ransom, "he was one of the ablest metaphysicians in Great Britain, and a lucid and scholarly writer on psychical subjects."[1] 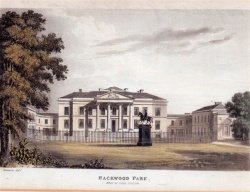 Charles Carleton Massey was born December 23, 1838, at Hackwood Park, Basingstoke, in Hampshire, England, the residence of his grand-uncle, Lord Bolton.

His father, William N. Massey, was a well-known member of parliament, Under-Secretary for the Home Office and Chairman of Committees during Lord Palmerston's administration, and afterwards Minister of Finance for India[2] in the 1860s.

He was educated at Westminster School, studied law, and was called to the bar. However, he abandoned his practice to devote to the study of philosophy, psychology, and phenomena. He only returned to the bar on the occasion of the famous trial of Henry Slade in 1876. He never married.

C. C. Massey was a member of Cox's Psychological Society, served on the first council of the Society for Psychical Research (SPR) when it was launched in 1882, and a few years earlier had been active in the affairs of the British National Association of Spiritualists (BNAS), holding office as one of its vice-presidents and serving on the Experimental Research and General Purposes Committees.[3]

Founding of the Theosophical Society

President-Founder H. S. Olcott and Mr. Massey had a life-long friendship. They seem to have met in England in 1870, when Col. Olcott was there on a business trip, but their friendship really developed when Mr. Massey visited New York in 1875. The latter had traveled to the US to investigate Spiritualistic phenomena and during the time the two visited together several mediums.[4][5]

In 1877, Mr. Massey helped to establish the Theosophical Society in England, which came to be known as the London Lodge. He became the first president of the London Lodge from June 27, 1878 to early 1880, and again from August 1882 until January 6, 1883. In 1881, he began a long friendship with A. P. Sinnett, who was then visiting from India.

In January 1879, during Mme. Blavatsky and Col. Olcott's stay in England en route to India, Mr. Massey was involved in two phenomena. The first one was described by historian Josephine Ransom as follows:

Before H.P.B. left London in 1879, Massey requested her to give relief to his father, whose eyesight was seriously impaired. To establish contact she took with her a pair of Mr. Massey's (senior) gloves. After arrival in Bombay H.P.B., by occult means, sent one glove to London, 17 February. Having been advised by a lady medium to be at home on the 17th, Massey waited in a darkened room, and presently a soft packet was flung in his face. The remaining glove was sent by post for comparison. This incident got into the papers and annoyed Massey, who complained that such publicity cost him his practice.[6]

The second incident involved the transmission of a letter to him by occult means. To produce these two phenomena the Masters used Mary Hollis Billing's spirit guide known as "Ski". Some time later, Master K.H. wrote to Mr. Sinnett in reference to this:

If Mr. Massey had “declared to the English spiritualists that he was in communication with the BROTHERS by Occult means” he would have spoken the simple truth. For not only once but twice had he such occult relationship — once with his Father’s glove, sent him by M. through “Ski,” and again with the note in question, for the delivery of which the same practical agency was employed.[7]

Eventually, Mr. Massey would come to suspect the nature of "Ski" and, therefore, of the phenomena.

Involvement with the Mahatmas

Mr. Massey figures prominently in the Mahatma Letters to A. P. Sinnett, being mentioned in more than 20 of them. H. P. Blavatsky tried hard to get the Masters of Wisdom to teach him.[8] He was eventually put on probation but, although of a very honest nature, was found not strong enough to become a chela. In one of his letters to A. P. Sinnett, Master K.H. wrote:

Doubtless a more sincere, truthful or a more noble minded man (S. Moses not excepted) could hardly be found among the British theosophists. His only and chief fault is — weakness. Were he to learn some day how deeply he has wronged H.P.B. in thought — no man would feel more miserable over it than himself.[9]

This probably referred to a situation that aroused at the end of 1882. Mr. Massey had become suspicious of Mme. Blavatsky due to the machinations of Dr. Billing and Hurrychund Chintamon. The latter, showed him some letters supposed to come from Mme. Blavatsky, incriminating her as the creator of a hoax in relation to the Mahatmas. In Mahatma Letter No. 92, Master K.H. describes to Mr. Sinnett the strategies these two people were using:

I am morally bound to set his mind [Mr. Massey's] at rest — through your kind agency — with regard to H.P.B. deceiving and imposing upon him. He seems to think he has obtained proofs of it absolutely unimpeachable. I say he has not. What he has obtained is simply proof of the villainy of some men, and ex-theosophists such as Hurrychund Chintamon . . . exposed and expelled from the Society ran away to England and is ever since seeking and thirsting for his revenge. And such other as Dr. Billing . . . [who] left his wife and Society and turned with bitter hatred against both women; and since then is ever seeking to secretly poison the minds of the British Theosophists and Spiritualists against his wife and H.P.B.[10]

Mr. Massey was obviously not satisfied with Sinnett's explanation and maintained his opinion. All this suspicion was probably part of his probation, because a few months later the Master wrote: "On this last day of your year 1882, his name comes third on the list of failures.[11] However, this did not imply that he had become immoral. The Master added in the letter: "With all he is the noblest, purest, in short, one of the best men I know, though occasionally too trusting in wrong directions. But he lacks entirely — correct intuition".[12]

At the beginning of 1883, Mr. Massey resigned as president of the London Lodge, but remained as a member of it. In September of that year his suspicion about Mme. Blavatsky and the Mahatma Letters was fueled by the "Kiddle Incident".

His mind is clouded with black doubt, and his psychological state is pitiable. All the brighter intentions are being stifled, his Buddhic (not Buddhistic) evolution checked. Take care for him, if he will not — of himself! The prey of illusions of his own creation, he is slipping down towards a deeper depth of spiritual misery, and it is possible that he may seek asylum from the world and himself within the pale of a theology which he would once have passionately scorned. Every lawful effort has been tried to save him, especially by Olcott, whose warm brotherly love has prompted him to make to his heart the warmest appeals — as you know. Poor, poor, deluded man! My letters are written by H.P.B., and he has no doubt I got “defrauded Mr. Kiddle’s” ideas out of her head! But let him rest as he is.[13]

On July 26, 1884, the Spiritualistic periodical Light published an article of his rejecting the explanations given by Mr. Sinnett about the "Kiddle Incident", and at the end of it he announced his official resignation from the Theosophical Society. He wrote:

I have only to add that while preserving all the interests, and much of the belief which attracted me to the Theosophical Society, and which have kept me in it up to now, notwithstanding many and growing embarrassments, I do not think that the publication of the conclusions above expressed is consistent with loyal Fellowship. The constitution, no doubt, of the Society is broad enough to include minds more sceptical than my own in regard to the alleged sources of its vitality and influence. But let any one try to realise this nominal freedom, and he will find himself, not only in an uncongenial element, but in an attitude of controversy with his ostensible leaders, with the motive forces of the Society. That is not consistent with the sympathetic subordination or co-operation which is essential to union. If anything could keep me in a position embarrassing or insincere, it would be the noble life and character of the president, my friend, Colonel Olcott. But personal considerations must give way at length; and accordingly, with unabated regard and respect for many from whom it is painful to separate, I am forwarding my resignation of Fellowship to the proper quarters.[14]

Mr. Massey was one of the founders of the Society for Psychical Research in 1882. 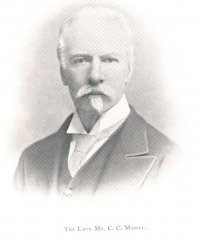 C. C. Massey passed away on March 29, 1905, due to heart-disease, from which he had been suffering the last few years. His physician, Dr. Simmons, wrote:

Mr. Massey was practically under sentence of death the last two. years, and his heart was only kept going by avoidance of all exertion. He was most wonderfully brave throughout, made no fuss, and always considered other people more than himself. I kept him alive for a month by hypodermics of strychnine twice daily. He had very little actual suffering and lived his own life to the end, got up and dressed almost every day, and retained all his faculties to the last. We had many long talks together, and my daily intercourse with him for weeks before his death has been one of the most valued experiences of my life.[15]

In an Obituary published in the Journal of the Society for Psychical Research W. F. Barrett wrote:

Beyond and above his intellectual gifts and his passionate love of truth were the sweetness and beauty of his character. One of the most unselfish and lovable of men, ever modest and retiring, yet with a rare and resolute moral courage, he was outspoken in espousing unpopular causes when his judgment convinced him they were right; he was indeed a "Just and faithful knight of God".[16]

Emily Kislingbury had this to say:

With the death of C. C. Massey on the 29th of March last, was broken the earliest link, save that of Col. Olcott, with H. P. B. and the beginning of the Theosophical Society in Europe. In 1876, Mr. Massey went to America to witness the "materialisations" of the Eddy brothers in their home in Vermont, and returning thence to New York, he made the acquaintance of Madame Blavatsky, and was enrolled in the newly-constituted Theosophical Society. He kept up a constant correspondence with H. P. B., and the following year the writer of this notice brought to England the charter of the British Branch, of which J. Storer Cobb was appointed Secretary, and C. C. Massey the President. Three other members were enrolled at the first meeting, including Mr. Stainton Moses and Dr. C. Carter Blake. These were shortly afterwards joined by Dr. Wyld, Mrs. Ellis, and Mme. de Steiger, Dr. Wyld later becoming President in place of Mr. Massey, whose retiring nature always made office distasteful to him. His mind was more inclined to mysticism than to occultism, and he remained to the last the student and friend of mystics. His gentle disposition endeared him to all who knew him, and his highly cultured and philosophic mind drew around him those of like calibre. He translated Du Prel's Philosophy of Mysticism; and Zollner's Transcendental Physics. Franz von Baader and Jacob Boehme were his constant study, and he contributed many valuable facts to the Psychic Research Society, his training as a barrister making him a reliable observer and capable of sifting evidence. His passing away is a distinct loss to his many friends.[17]